Please ensure Javascript is enabled for purposes of website accessibility
Log In Help Join The Motley Fool
Free Article Join Over 1 Million Premium Members And Get More In-Depth Stock Guidance and Research
By Andy Gould - Updated Oct 4, 2017 at 11:15AM

The mobile and internet services provider looks to add another Ting town via acquisition.

In late September, Tucows Inc. (TCX -1.07%) announced that it had submitted a $28.8 million bid to acquire the Burlington Telecom (BT) fiber network in Burlington, Vt. Though it would pale in comparison to Tucows' $83.5 million acquisition of domain provider Enom earlier in 2017, this could still be an important addition to the company's nascent Ting Internet division as it seeks to add to its growing list of "Ting towns" -- which currently includes Charlottesville, Virginia; Westminster, Maryland; Holly Springs, North Carolina; Sandpoint, Idaho; and Centennial, Colorado.

What's in it for Tucows?

Tucows' offer includes $27.5 million in cash, an additional $0.5 million if certain EBITDA targets are reached, and estimated costs of $0.8 million to relocate BT's data center. BT has over 7,200 current subscribers and is available to roughly 16,000 residences. While that may sound like small potatoes, consider that Ting's current plans for its first five fiber towns will provide around 85,000 total serviceable addresses. So a BT acquisition would provide growth in serviceable addresses of around 19%. 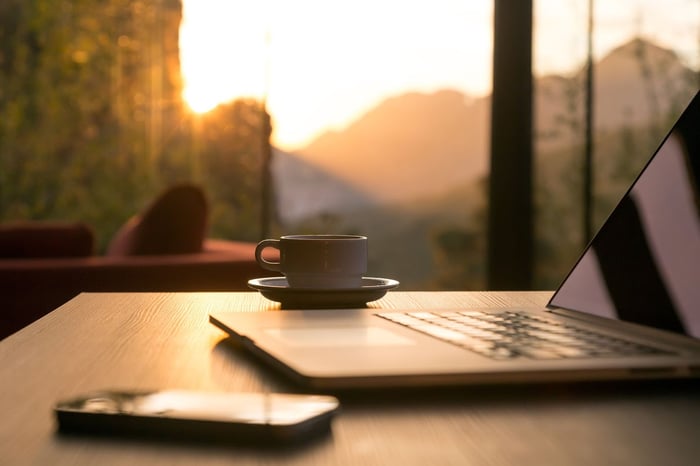 And while it may not be directly applicable to an acquired Ting town, Tucows' model for launching service in a new community estimates that 50% of serviceable addresses will become customers within five years. Tucows also estimates that its fiber buildout costs an estimated $2,500 to $3,000 to connect each customer to the network, with each customer expected to contribute $1,000 or so per year in gross margin.

Using these numbers, within five years, if its gross margin and uptake rates hold, Tucows could be realizing $8 million in annual gross margin from BT alone.

Trying to convince a skeptical community

Given the sensitivity around the potential sale of a municipally owned asset to an outsider group like Tucows, the company hosted an Ask Me Anything session on Reddit. A few comments from CEO Elliott Noss helped outline what a Tucows-owned Burlington Telecom might look like.

On the prospect of price increases:

In our current FTTH [fiber to the home] markets we charge $89 for a gig. In Burlington it is $70 with contract and $83 without. So there is not really a significant difference. There are a bunch of things as follows:

We have committed to maintaining prices for 30 months. This does NOT mean in month 31 we will be raising prices. ...

We believe that prices for telecom are too high in general and are likely to fall in the longer term, not rise. The inputs for these services are all essentially subject to Moore's law so they should. And we are used to living in markets (like domain names) where falling prices are the expectation. ...

On the possibility of Tucows selling itself to a bigger provider like Comcast: "No one here has any intention of selling to any of those large incumbents. shudder"

Lastly, Noss commented on Tucows' motives for the acquisition

Burlington is a more mature fiber market and it is once a market is penetrated that the REALLY interesting benefits can start to accrue. If we are lucky enough to be successful here, we can start to learn things about the benefits that fiber provides together, and we can spread those learnings to help make positive change in other communities. ...

The most important thing about it for us is operating a FTTH at scale (>50%). We believe that is where the magic happens. The opportunity to really take the impact of ambient connectivity to the next level and for what we learn together in Burlington to be a model for the rest of the country.

Out of eight submitted bids, Ting is one of three remaining finalists after a fourth party withdrew. The two other finalists are Schurz Communications Inc. and a cooperative of residents and business owners called Keep BT Local. While Burlington's city council originally planned to narrow the field again to two finalists on Oct. 2, that decision has been delayed until Oct. 16. For now, Noss says the feedback he has gotten from Burlington's mayor and other officials "struck a balance between being encouraging and noncommittal."

On its last earnings call, Tucows admitted that the expansion of Ting Internet was moving slower than expected, with no new Ting towns announced so far in 2017. But make no mistake -- Ting Internet remains Tucows' largest opportunity for future growth. And while it wouldn't be nearly as transformative for Tucows as its last big acquisition, winning the bid for BT would mark a big step forward as the company begins to scale up its internet service arm.

Editor's note: An earlier version of this article said that BT has over 5,800 current subscribers. It has been updated.