Please ensure Javascript is enabled for purposes of website accessibility
Log In Help Join The Motley Fool
Free Article Join Over 1 Million Premium Members And Get More In-Depth Stock Guidance and Research
By Dan Caplinger - Oct 4, 2017 at 9:45AM

People use coatings and sealants to preserve and protect their most prized possessions, and RPM International (RPM 2.25%) caters to those folks with products like corrosion-fighting Rust-Oleum and DAP caulks and sealants. With strength in key areas like the housing market and the automotive industry, RPM has been able to produce long-term growth with its stable of consumer and industrial products.

Coming into Wednesday's fiscal first-quarter financial report, RPM shareholders were hoping that the company would be able to overcome some headwinds that had shown up in its results over the past couple of quarters. RPM's numbers were better than most had expected, creating some positive momentum that the company believes could persist throughout the fiscal year and beyond. Let's look more closely at the latest from RPM International and how its prospects look. 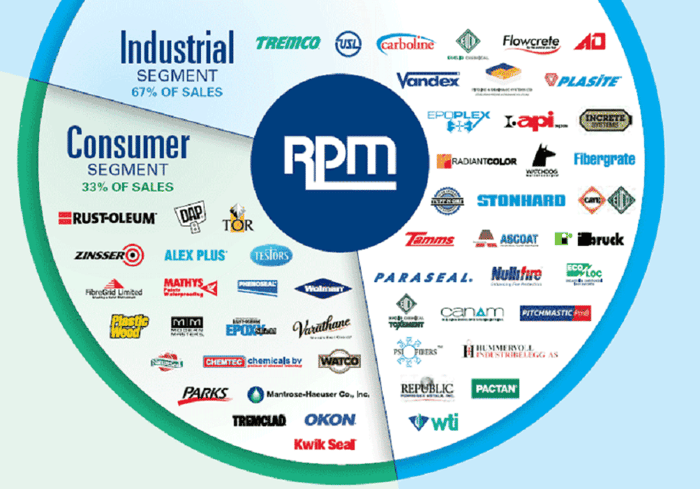 RPM International's fiscal first-quarter results were a nice change from past reports. Revenue climbed 7.5% to $1.35 billion, easily topping the 5.5% growth rate that was the consensus forecast among investors. Net income eased higher by 3%, reversing year-over-year declines from its results three months ago and coming in at $116.4 million. Adjusted earnings of $0.86 per share were $0.02 higher than what most of those following the stock had expected to see.

Much of RPM's profit gains came from the consumer segment, even though the pace of its revenue growth was slower than that of the industrial side of the business. Consumer sales rose nearly 7%, but that entire rise came from the acquisitions of Touch n' Foam and SPS, as organic revenue dropped by about 1%. The company saw weaker performance in the paint category within the U.S. market that weighed on results, overshadowing a strong residential housing market. Pretax profit was up by $2.5 million from the previous year's period, amounting to 3.5% growth.

The smaller specialty segment also did quite well. Revenue climbed almost 7% on a 3% rise in organic sales, and pretax profit for the unit was up 9%. RPM has a restoration business that fared well in the aftermath of Hurricane Harvey. Even though raw material costs were higher, the segment was able to produce better bottom-line results from the cost-containment strategy that RPM has implemented recently.

RPM's industrial segment arguably fared the worst, but even it had successes. Sales were up 8% on organic growth of 3.2%, with good performance in Europe and Canada. However, the North American commercial construction market became more volatile, and poor performance in Latin America offset some of the turnaround RPM saw in the oil and gas industry. Pretax profit therefore rose only a fraction of a percentage point from year-ago figures.

CEO Frank Sullivan pointed to acquisitions and cost reductions as key drivers of RPM's success. "Rising raw material costs negatively impacted gross profit margins," Sullivan said, "[and] as a result, we instituted price increases which began to take effect late in the quarter." The CEO also pointed to the disappearance of currency-related headwinds that helped to bolster RPM's financial results.

RPM did warn that the fiscal second quarter has gotten off to a somewhat rocky start, but it's optimistic that things will improve. In Sullivan's words, "The severe hurricane season will initially hinder sales in the second quarter but provide higher than originally expected sales in the back half as communities in the devastated Texas, Florida, and Caribbean regions begin the rebuilding process." High demand for raw materials will boost RPM's costs, but it also anticipates passing through those expenses through price increases.

RPM didn't make any major changes to its guidance. For fiscal 2018, the company still sees itself earning between $2.85 and $2.95 per share. Sales growth should come in within the mid-single-digit percentage range for the industrial and consumer segments, with slightly lower growth for the specialty segment.

RPM shareholders had already anticipated the positives in the report; the stock had risen 7% in the month prior to the Wednesday morning announcement as investors assessed the potential impact of hurricane season on short- and long-term financial results. RPM's efforts to be more efficient have started to pay off, and the company needs to sustain its positive momentum on the cost front in order to maximize profits for its shareholders.