An industry as big as groceries doesn't have to have only one winner.

Industry competition is often characterized as a sport, with a clear winner and loser, however, the business world is not always like that. Oftentimes, there can be more than one winner in an industry, and investors can profit from two competitors. For instance, while I am a proud and very optimistic owner of Amazon (AMZN 2.07%) stock, I recently bought Kroger (KR 0.60%) stock as well. Here's why.

This is why I own Amazon. It takes aim at huge industries, drops prices, and improves customer service through technology without regard for near-term margins. Using that formula, Amazon can take aim at just about any industry,  which means its total opportunity is much bigger than that of any company I know of. Even in the company's current markets -- online retail, cloud computing, and streaming video -- there is still a long runway for growth. 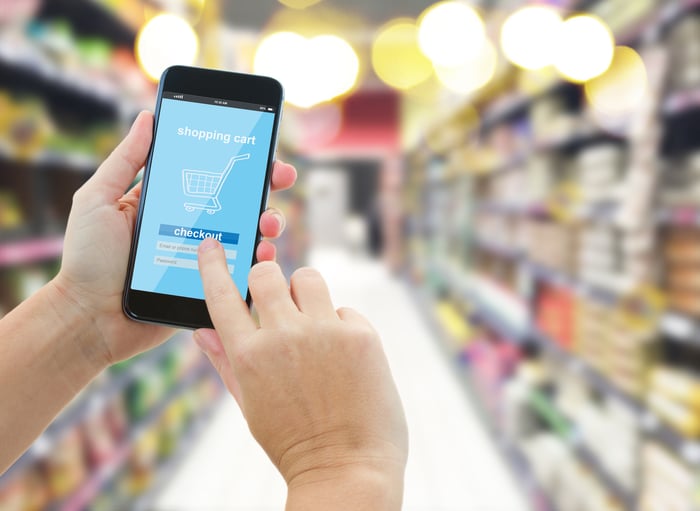 Why I bought Kroger anyway

It may seem odd that I also recently purchased Kroger stock, given that Amazon is moving into groceries in a big way. While Amazon is clearly a disruptive growth story, Kroger became a value stock when it plunged over 30% this year. As of this writing, it sits 50% off its 2015 high. The stock now trades at 12.5 times earnings, and its dividend yield is a respectable 2.32% -- even with a rather low payout ratio of 28%. 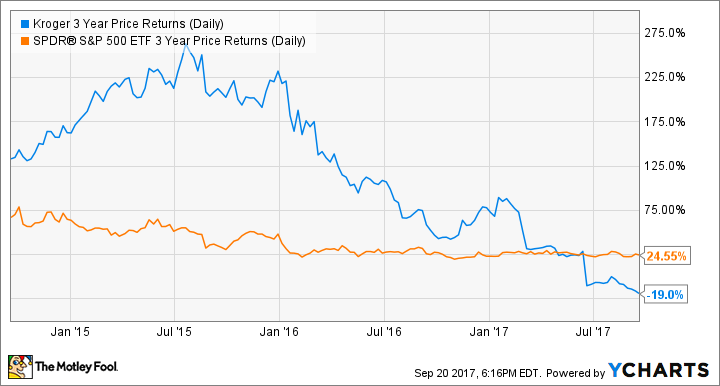 Of course, just because a stock looks "cheap" on paper does not make it a good investment. Kroger's business is not only under fire from an amped-up Whole Foods, but also is threatened as German discount grocers Aldi and Lidl gear up for an expansion.

So why do I think Kroger can hold its own? A few reasons. First, the grocery industry is very fragmented, as you can see in this chart:

Kroger is the No. 2 company in this chart, with 8.9% market share, trailing only Wal-mart, but it is the largest grocery-only chain. Kroger also has the most locations, with roughly 2,800 grocery stores under different local brand names. Most customers come from within a 2.5-mile radius.

So the company is closer to customers than big-box stores, has more variety than Whole Foods or the German discounters, and its prices are in the middle (though closer to the discounters, which Kroger says it will price-match).

Moreover, I think the convenience and variety of traditional grocery stores still have appeal. While some companies may lose as Amazon moves more into groceries, Kroger's leading position means it will likely survive, potentially acquire other chains, or merely benefit if smaller players go away.

Most importantly, for an "old-school" company, Kroger is rather innovative, which is essential in a competitive industry.

For instance, the company has greatly expanded its private-label brands. Its Simple Truth brand is actually the biggest organic brand in the country by volume right now, according to the company.  I shop at Ralphs, which is owned by Kroger, and have noticed Simple Truth has expanded into both coffee and sparkling water, among other products, just over the past few months.

The company has been investing heavily in technology, with its 2015 acquisition of 84.51 Degrees, a retail data analytics firm.

Other recent initiatives include:

Amazon is a remarkable company that has proven its ability to accomplish amazing things in different industries. However, Kroger is not an old, lumbering dinosaur that will sit back and let competition eat its lunch (pun intended). With Kroger having only 8.9% market share, and Whole Foods and Amazon only having 2.5% market share combined, I think there's room for both companies to succeed.