Please ensure Javascript is enabled for purposes of website accessibility
Log In Help Join The Motley Fool
Free Article Join Over 1 Million Premium Members And Get More In-Depth Stock Guidance and Research
By Beth McKenna - Oct 5, 2017 at 7:45AM

The Roomba maker's stock had a tough September, but it's still up 83% over the last year.

Shares of consumer robot specialist iRobot (IRBT -5.29%), best known for its Roomba robotic vacuum, plunged 19.2% in September, according to data from S&P Global Market Intelligence. For context, the S&P 500 returned 2.1% in the month. 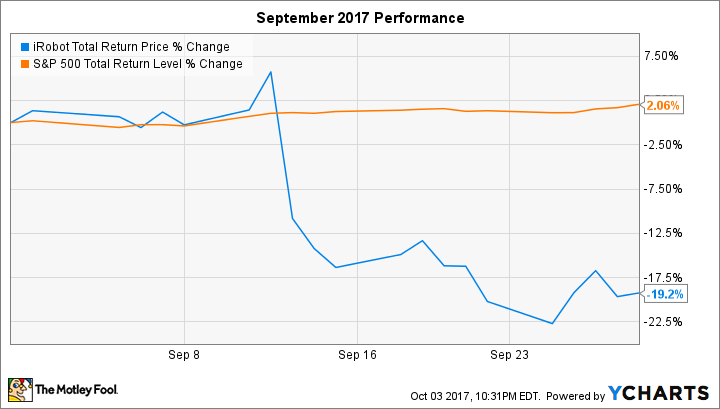 We can attribute iRobot stock's drop in September to a short-seller attack following the official entrance of new competitor SharkNinja into the robotic-vacuum market. The market sent the stock tumbling to a closing loss of 15.7% on Sept. 13 following Spruce Point Capital's most recent published update on iRobot.

The week prior to the attack, privately held SharkNinja launched its Shark Ion Robot 750, which sports a price tag of $349.99. This price point is near the lower-end of iRobot's price range for its robotic-vacuum product line.

Spruce Point's updated bear thesis is largely centered on the argument that SharkNinja's "ability to engineer a superior product at a value price point" combined with its marketing skill will enable it to take market share from iRobot. The short-seller cites SharkNinja's success in the upright-vacuum market -- the company took market share from high-end player Dyson -- as support for its thesis.

Investors in any company should naturally keep an eye out for how the competition is faring. That said, iRobot has been able to maintain its leadership position in the robotic-vacuum market despite numerous companies entering the market with competing products across various price points, so at this very early point, there seems no reason to be overly concerned.

Moreover, the market for robotic vacuums is growing -- which drove iRobot's 23% overall revenue growth and 46% revenue growth in the United States in the second quarter -- and an expanding market means there's more room for several companies to do well in this space. Additionally, while the Roomba is currently iRobot's bread-and-butter, it also sells its Braava family of wet-floor care robots, and has a strong patent portfolio, which should support both continued improvements in its current products and the launch of new products in the coming years.