Please ensure Javascript is enabled for purposes of website accessibility
Log In Help Join The Motley Fool
Free Article Join Over 1 Million Premium Members And Get More In-Depth Stock Guidance and Research
By Daniel Sparks - Oct 6, 2017 at 10:43AM

The rise of e-commerce may be weighing on brick-and-mortar retail, but Costco's wholesale business is holding up handsomely.

Costco (COST 1.35%) is one of the few brick-and-mortar retailers that have seen their growth persist at meaningful rates even as e-commerce continues to gain steam. And Costco's fourth quarter of fiscal 2017 was no exception. The company wrapped up its fiscal 2017 with some impressive results.

From strong comparable sales and revenue to rapidly rising e-commerce sales and profit, here are the most important metrics from Costco's fourth-quarter report. 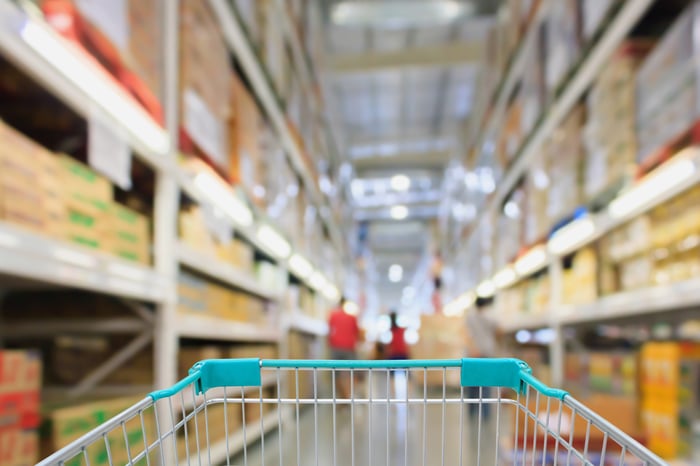 15.8%: Costco's revenue growth was impressive. Its fiscal fourth-quarter revenue rose 15.8% year over year. To be fair, investors should exclude an extra week from the quarter to get a better year-over-year comparison. Costco's fourth quarter of 2017 included 17 weeks. This compares to its 16-week fourth quarter last year. Excluding one week of sales during the 17-week period for a better comparison, revenue increased by 8.9% year over year. Notably, this adjusted revenue growth marked an acceleration from Costco's 7.9% year-over-year rise in revenue in its fiscal third quarter.

This growth continues to put revenue growth at big-box grocer competitors like Wal-Mart (WMT 0.86%) and Kroger (KR 1.71%) to shame. Wal-Mart, which runs Costco's direct competitor Sam's Club, only saw revenue increase 2.1% year over year in its most recent quarter. In Kroger's most recent quarter, revenue climbed only 3.9%.

6.2%: Costco's important comparable sales metric, or a measure of net sales from warehouses operating for more than a year, climbed a notable 6.2% year over year in the five-week period ending on Oct. 1 compared to the year-ago period when excluding the impacts from changes in gasoline prices and currencies. This marked a nice acceleration from the 5.9% year-over-year growth Costco saw in its most recent monthly period (the four weeks ending Aug. 30).

7.2%: Costco's international efforts are paying off. Its "other international" segment, or sales from warehouses in all international markets except Canada, saw comparable sales in the five-week period ending on Oct. 1 increase 7.2% year over year when excluding the impacts from changes in the prices of gasoline and currencies.

7.1%: Costco's most important market -- the U.S. -- remains strong. The geographic region's comparable sales in the five-week period ending Oct. 1 were up 7.1%. U.S. comparable sales for Costco's 17-week fourth quarter and the 53-week fiscal year ending Sept. 3 were up 5.8% and 3.7% year over year, respectively, when including the impacts from changes in gasoline prices and foreign exchange.

30%: Importantly, Costco's e-commerce sites are performing well. Sales from e-commerce sites operating for more than one year were up 30% in the five-week September period compared to the comparable year-ago period.

These impressive figures are a testament to the sustainability of Costco's business model during a time when e-commerce is changing the broader retail landscape.