SeaWorld Entertainment (NYSE:SEAS) may be up for sale, and if so, things could get interesting. Shares of the the troubled theme park operator dismissed the chatter on Thursday, sending the stock nearly 7% lower after Bloomberg reported that Legoland operator Merlin Entertainments Plc has approached SeaWorld about acquiring some of its assets.

The report's unnamed source also said that SeaWorld has received interest from other possible suitors. Who would buy SeaWorld Entertainment? It's an activist target with sluggish attendance trends. Things are so bad at SeaWorld that it had to nix its dividend last year. However, opportunistic shoppers know that there's value in everything at the right price. SeaWorld still attracted 22 million guests across its properties last year, generating average revenue per guest just north of $61. 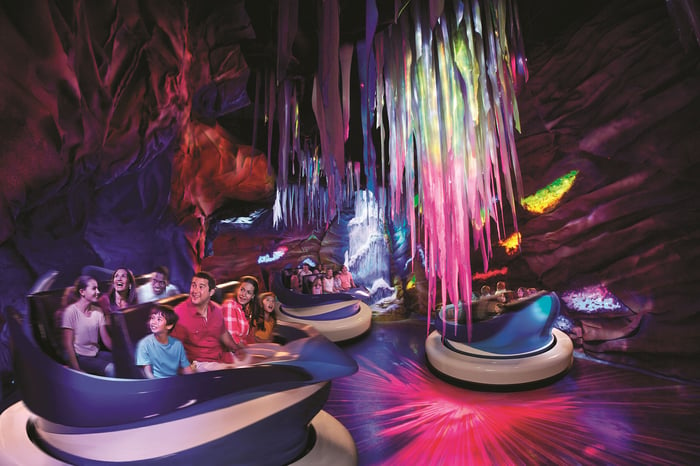 A whale of a deal

There are plenty of companies that can benefit from having SeaWorld in their arsenal, especially if they believe that they can turn the three namesake parks around while also benefiting from Busch Gardens, Sesame Place, and its water parks. Merlin Entertainments is believed to be interested in just Busch Gardens Virginia and Busch Gardens Williamsburg, and it wouldn't be a surprise if two companies step up to split the assets, particularly if Merlin is able to pay enough of a premium for those two assets.

Existing SeaWorld partners are logical potential buyers. China's Zhonghong -- the company that shelled out $429 million or $23 a share for a 21% stake earlier this year -- is an obvious candidate. It's more than a fifth of the way there. There's also SeaWorld's partner that's building the first SeaWorld without killer whales in Dubai as a possible acquirer.

We also can't forget private equity. SeaWorld Entertainment has struggled as a publicly traded entity. It's hard to succeed when you have protesters including PETA mocking your financials with every passing quarter. A turnaround would be a lot easier to achieve outside of the fickle stock market with its need for quarterly updates.

However, the more scintillating candidates -- at least from the perspective of retail investors that may want a shot at owning SeaWorld's assets through its attempted turnaround -- are publicly traded stateside companies. I went over the many reasons why Disney (NYSE:DIS) should be interested in SeaWorld, but it won't be. It's a long shot. However, let's not dismiss the strong reasons for Comcast (NASDAQ:CMCSA), Cedar Fair (NYSE:FUN), Six Flags (NYSE:SIX), or possibly a media giant like Discovery Communications (NASDAQ:DISC.A) stepping up.

You must be this tall to buy

Comcast's Universal has theme parks competing with Disney on both coasts, and these attractions also happen to be a reasonable drive from SeaWorld San Diego and SeaWorld Orlando. Comcast has been narrowing the attendance gap with Disney, and it's been adding hotels, land, and even a new water park to become a more complete destination in Florida. SeaWorld's most successful properties in terms of traffic are in Central Florida. If Disney did fear the threat of Comcast's rise before, it will have to take it seriously if Universal owned most of Disney World's biggest rival parks.

Cedar Fair and Six Flags are regional amusement park operators, but they have surprisingly stayed out of the lucrative yet cutthroat Florida market. Birthing a new park would be expensive and take a long time to establish, but Cedar Fair or Six Flags could grow up in a hurry by adopting SeaWorld Entertainment. SeaWorld has two parks that outdrew Cedar Fair's top park and three parks that attracted more guests than Six Flags' top dog. There would also be welcome seasonal smoothing since most of SeaWorld's parks are open year-round.

Then we get to Discovery, which may seem like a name out of left field. It doesn't own any theme parks, and it's a highly leveraged company with $8.3 billion in long-term debt bloating its enterprise value to nearly $20 billion. However, we've seen Disney and Comcast realize that media giants can use a theme park presence to reach tens of millions of guests a year that they can expose to their cable networks.

Discovery Communications is the company behind Animal Planet, TLC, Discovery Channel, and Discovery Kids. Between the animal component at Busch Gardens Tampa and the sea life at SeaWorld -- that could be repositioned to appease activists by replacing flashy shows with larger sea pen observatories -- Discovery's cable content and SeaWorld's assets fit like interlocking puzzle pieces.

No one is going to pay a lot for SeaWorld, but more than a few companies can pay enough of a premium to make it worthwhile for both parties without being dilutive to the buying party. The next few months will be interesting.