Please ensure Javascript is enabled for purposes of website accessibility
Log In Help Join The Motley Fool
Free Article Join Over 1 Million Premium Members And Get More In-Depth Stock Guidance and Research
By Brian Feroldi, Rich Duprey, and Demitri Kalogeropoulos – Oct 7, 2017 at 10:30AM

Looking for a few rock-solid businesses to buy? Here are three gems that you should consider.

Not every stock investor wants to swing for the fences. In fact, plenty of shareholders just want to own dominant businesses that crank out predictable returns in good times and bad.

Which stocks do we think are good choices for investors who seek stability? We asked a team of Motley Fool investors to share their opinions, and they selected Coca-Cola (KO -2.15%), Disney (DIS -0.75%), and Ecolab (ECL -1.75%). 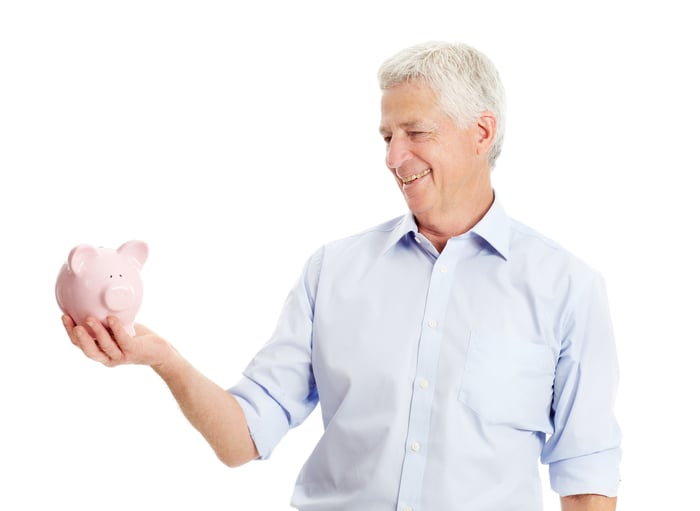 Rich Duprey (Coca-Cola): One of the hallmarks of a great company is the ability to adapt to a changing market. Coca-Cola could have been run over by the massive consumer shift away from soda to more healthy drinks. Unlike rival PepsiCo (PEP -1.93%), which has a thriving snack-food business, Coke is wholly a beverage business and one fully wrapped around soda.

The sugary beverage still accounts for the lion's share of its revenues, with the Coca-Cola brand alone accounting for 45% of worldwide sales. But seeing the writing on the wall, the non-alcoholic beverage giant initiated a transformation to break away from being beholden to sugar-based drinks toward low- and no-calorie sparkling soft drinks, tea, juices, energy drinks, and flavored water.

It's now also gotten into the newly emerging food niche of meal-kit delivery. While it won't be preparing the food recipes that will be delivered to a customer's door through a partnership with leading provider Chef'd, Coca-Cola will be pairing specific brands in its portfolio with certain meals. It represents a unique way of getting its drinks out to more people and extending its brand.

The reason investing legends such as Warren Buffett have invested in Coca-Cola over the years is because it's close to the perfect investment. While it will rise and fall over time, year in and year out it remains a consistent performer -- or as The Motley Fool's co-founders David and Tom Gardner once referred to it, the First Federal Bank of Coca-Cola. That's because of its strength, stability, and durability.

Coca-Cola has raised its dividend every year for 55 years, and it currently yields 3.2%. This is about as stable a stock as a conservative investor could find.

Demitri Kalogeropoulos (Disney): Disney enjoys an unusually steady business despite its positioning in the traditionally volatile entertainment industry. It helps that the House of Mouse owns a deep portfolio of valuable brands that it can monetize through its collection of diverse operating segments: broadcast and cable media, parks and resorts, consumer products, and studio entertainment. These divisions complement each other so that gains in one often make up for declines in others.

For example, Disney has endured two big hits to its operating results this year, first from a media segment that's slumping due to falling cable and ESPN subscribers, and second from a relative lack of studio releases. Yet booming results in the parks and resorts division has picked up almost all that slack. Through the first nine months of the fiscal year, Disney's sales are flat and profits have just ticked down by 5%.

Disney's new fiscal year should put the studio and consumer-products businesses back out in front, starting with December's release of The Last Jedi, followed by four Marvel movie releases and major launches from the Pixar and Disney Animation studios. Meanwhile, conservative investors will love the fact that ESPN worries mean they can now buy this stock for 17 times earnings, down from a P/E ratio of 25 in early 2015.

Brian Feroldi (Ecolab): When it comes to finding stable businesses, I'm a big fan of looking for companies with long histories of financial success. If I find a business that shows stable revenue and profit growth for decades, the odds are good that there's something special going on.

That's why I get excited when I take a long-term look at Ecolab's financial performance. This company has been a remarkably consistent performer since it was founded nearly a century ago. For proof, here's a chart that shows Ecolab's revenue and profit growth over the last three decades. 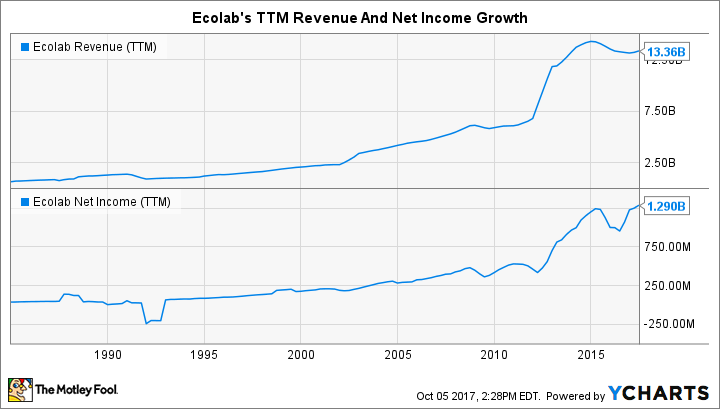 While there are a few dips here and there, the overall trend is clearly up and to the right.

What's Ecolab's secret sauce? The answer is that the company specializes in providing sanitation and cleaning solutions to a large variety of industries. What's wonderful about this business is companies of all sizes must maintain basic cleanliness standards in good times and in bad -- otherwise, they put the health of their employees and customers in jeopardy. This translates into consistent demand for Ecolab's products, which helps to explain why revenue and profits are so predictable.

Looking ahead, the company's growth strategy is to simply raise prices, buy back stock, launch new products, improve margins, and buy other complementary businesses, on occasion. This is a reliable formula that enabled consistent profit growth for decades. That's why Ecolab is an ideal stock for risk-averse investors.