Find out what's giving the e-commerce giant yet another competitive advantage.

Amazon.com (AMZN 3.15%) already has a number of advantages over the competition. Its reputation for low prices keeps customers from comparison shopping on the internet, and the convenience it offers with Prime two-day free shipping means that many of its customers don't even care if they're getting the lowest price on Amazon as the convenience of Prime is worth paying a little extra.

And, of course, Prime itself is a competitive advantage with its smorgasbord of benefits that none of its competitors can match, which keeps them within Amazon's ecosystems.

Now, however, it seems the company has carved out another advantage that could be more insidious than any other. The e-commerce giant has become the top recruiter among MBA students, replacing the traditionally coveted posts at Wall Street banks and top consulting firms. 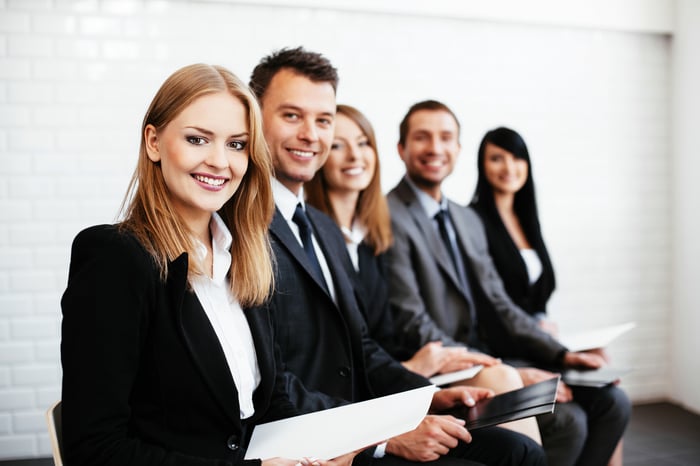 According to the Wall Street Journal, Amazon has hired 1,000 MBAs over the last year, thriving among the business school set due to a combination of the company's own reputation and an aggressive recruiting push.

Amazon sends as many as ten recruiters to school events, and the company has hosted 650 MBA students on its own campus. Meanwhile, the company's reputation for fast growth, experimentation in a wide range of industries, and an eagerness to embrace new ideas has made it a popular choice with MBA classes. Two years after The New York Times published a much-read investigative report depicting Amazon as a soul-crushing workplace, the company now seems to be a more popular employer than ever.

Why hiring is so important

All of the big tech companies are considered desirable places to work for engineers, managers, and other strivers, but a company is often nothing more than the people working for it. Success or failure depends on the talent walking into the hiring office. For instance, Amazon's success with Alexa's voice-activated technology or cloud computing may be primarily due to the quality of the employees who pioneered such initiatives, as well as the culture that shaped them.

It's clear that Amazon understands this, especially at a time when the job market is tighter than at any point in the last ten years. Not only is the company aggressively going after MBA students, but it's using similar tactics to hire low-wage employees to staff its fulfillment centers. The company held a nationwide job fair in early August to recruit as many as 50,000 employees to pick and pack orders at its warehouses, but the timing was canny, coming just before other retailers announced their own holiday hiring plans. Holding such an event in August, rather than October or November, allows Amazon to get a head start on the holiday season and hire the best of the available talent pool.

The difference is clear

In addition to being the top choice among MBA graduates, Amazon is also being serenaded by more than 50 cities to host its second headquarters. The company is leveraging its reputation for growth and innovation on both ends of the equation, which gives it a leg up over competitors like Wal-Mart (WMT 0.86%).

Wal-Mart's own tech division, WalMart Labs, has long struggled to keep up with Amazon and others at the forefront of e-commerce and tech, and has been described by some employees as having no defined culture and being uninspiring, bureaucratic, and directionless.

Even Marc Lore, the Founder of Jet.com who now heads Wal-Mart's e-commerce operations, was once dismissive of working for the retail giant, saying when Jet was independent, "If someone is unhappy here and doesn't see an opportunity for growth, OK, good luck, go to Walmart." The implication is clear. Wal-Mart is a stodgy, uninteresting place to work. That may be changing under Lore's command, but Amazon's reputation is becoming a key advantage for hiring.

The incoming crop of talent may not provide immediate benefits to Amazon, but the company is known for its long-term focus. If it can retain these top recruits for the years to come, they will provide yet another long-term advantage for Amazon.