Please ensure Javascript is enabled for purposes of website accessibility
Log In Help Join The Motley Fool
Free Article Join Over 1 Million Premium Members And Get More In-Depth Stock Guidance and Research
By Matthew Frankel, CFP® - Oct 9, 2017 at 9:04AM

Here are three stocks with lots of growth potential, but a reasonable level of risk for a 40-something investor.

If you're in your 40s, it can be tough to know the ideal stocks to invest in. You don't have quite as much risk tolerance as a 20- or 30-something investor, so you don't want companies that are excessively risky. You also still have 10-20 years or more until retirement, so you don't need to completely avoid risk, either.

With that in mind, here are three stocks that I believe could be excellent additions to your portfolio while you're in your 40s. 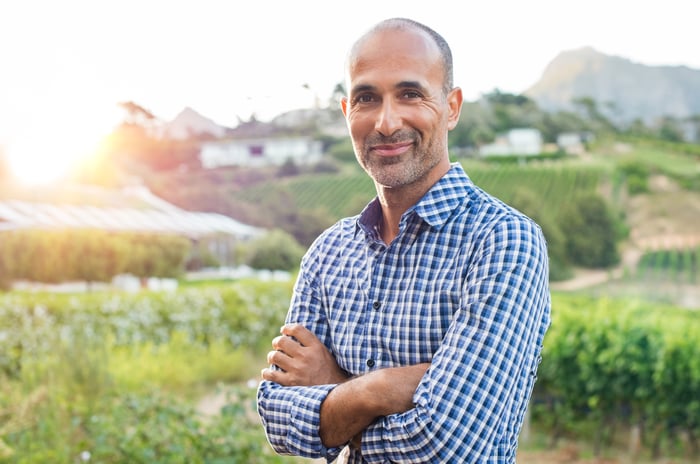 Net-lease retail real estate investment trust (REIT) National Retail Properties (NNN 1.82%) pays a 4.5% dividend and has increased its payout for 28 consecutive years. Even better, the stock has produced a 13.2% annualized total return over the past three decades, handily beating the S&P 500 over that time frame.

The largest pure-play net-lease retail REIT, National Retail Properties owns 2,675 properties in 48 states, most of which are single-tenant retail (think drugstores, convenience stores, banks, and similar businesses). Most of the tenants are in recession-resistant and/or e-commerce-resistant industries, making the company largely immune to the headwinds plaguing much of the brick-and-mortar retail industry.

In addition, the net-lease structure offers another layer of risk protection. A net lease, or triple-net lease, requires the tenant to pay property taxes, insurance, and most maintenance costs, effectively eliminating the uncertain expenses of property ownership. In addition, these leases have long initial terms (generally 15 years or more), minimizing turnover and vacancy risk.

In a nutshell, National Retail Properties has a proven track record of success, and with a remarkably low level of long-term risk.

I've written several times that the healthcare industry will be one of the best growth opportunities over the coming decades, and that my favorite way to invest in the growth is through real estate. Ventas (VTR 2.58%) is a REIT specializing in healthcare properties.

The company owns more than 1,200 properties, and the majority of these (55%) are senior housing. Medical offices, post-acute care properties, life science facilities, and health system real estate make up the rest.

There are two major growth opportunities that Ventas could capitalize on. First, there's the ongoing retirement of the baby boomer generation. The 75-and-older age group in the U.S. is growing seven times as fast as the overall population, and is expected to increase by 70% by 2030. This should translate to steadily growing healthcare demand, especially in the senior housing industry, Ventas' bread-and-butter.

In addition, the existing healthcare real estate market is more than $1 trillion in size, and is less than 15% REIT-owned. This is significantly lower than many other types of commercial real estate, and means that there is lots of opportunity for consolidation.

Ventas has grown its funds from operations (the REIT version of earnings) at an 11% annualized rate since 2001, and has been able to safely increase its dividend at a faster rate than its peers. So, not only is Ventas a high-income stock with a safe 4.9% yield, but it has the capability to generate market-beating returns as well.

Howard Hughes Corporation specializes in master-planned communities (MPCs), which are large residential developments with lots of amenities, such as golf courses and commercial properties. The simple explanation of the company's business model is that it sells residential land in these communities to homebuilders, and then develops commercial properties to take advantage of the increasing population and generate cash flow.

A good example of one of the company's MPCs is the Summerlin community in Las Vegas, Nevada. The community has 22,500 acres of space, and has amenities including 150 parks, 150 miles of trails, two dozen schools, three colleges, and nine golf courses, just to name a few. The community also contains downtown Summerlin, an entertainment and shopping district. Howard Hughes projects that the community's residential land won't sell out until 2039, at which point the population will exceed 200,000 residents.

Howard Hughes' five MPCs have projected residential sell-out dates ranging from 2020-2039, making it an excellent choice for 40-something investors with the time horizon to see the company's current plans through to completion.

Why buy these stocks in your 40s?

These stocks all have lots of long-term compounding power without a ton of long-term risk, but can be quite volatile over shorter time periods. Therefore, by buying them in your 40s, you're leaving yourself with a couple decades to ride out the ups and downs of the markets and let these stocks do what they do best: create value for investors over long periods of time.