These energy infrastructure companies' shares sell for low prices because the market is overlooking significant improvements in their prospects.

The oil market downturn left a wave of destruction in its path, not sparing any company that operated in the sector. While plunging oil prices hit producers the hardest, energy infrastructure companies also saw their values plummet despite the fact that most generated steady fee-based cash flow throughout the cycle. Thanks to the sell-off, many of these companies now trade at ridiculously cheap valuations, including CorEnergy Infrastructure Trust (CORR 10.04%), Kinder Morgan (KMI -0.78%), and EnLink Midstream Partners (NYSE: ENLK). Those discounted prices provide investors with a chance to lock up an appealing income stream that appears poised to grow now that the oil market is getting back to normal.

The worries have lifted, but its stock price hasn't fully recovered

CorEnergy Infrastructure Trust is unique in the energy sector in that the company is a real estate investment trust (REIT) as opposed to a master limited partnership (MLP). CorEnergy leases its assets to one tenant while MLPs typically lease theirs to multiple customers. The single-tenant focus of CorEnergy weighed on the company's value during the downturn because two of its primary customers declared bankruptcy. However, because its assets are critical to the operations of customers, these leases survived the bankruptcy proceedings.

As a result, CorEnergy expects to generate about $4 per share in adjusted funds from operations (FFO) this year, which is a proxy for cash flow. That number is worth noting for two reasons. First, it means the company can easily cover its $3-per-share dividend, putting its current 8.5% yield on solid ground, especially since the company's leverage ratio is below its target range. Second, with the stock trading for around $35 a share these days -- which is more than 20% below where it was trading before the downturn -- CorEnergy sells for less than nine times FFO, a dirt-cheap price for a REIT. Put it all together, and this stock is crazy cheap and surprisingly safe. Meanwhile, with a healthy financial profile, the company is on the prowl for acquisitions that can diversify its revenue streams and increase cash flow so that it can eventually start growing the payout.

One company that everything it said it would do

Natural gas pipeline behemoth Kinder Morgan's stock plummeted in late 2015 as credit tightened in the energy sector, which fueled fears that the company would need to reduce its dividend. Those concerns came to fruition when the company announced a 75% dividend reduction toward the end of the year, with plans to reallocate its steady cash flow toward debt reduction and internally financing capex. The company said that once it shored up its financial situation, it would begin returning more cash to shareholders.

It reached that point earlier this year, which enabled it to announce a significant dividend increase for 2018 followed by two substantial boosts in 2019 and 2020 along with a multibillion-dollar stock buyback program. One of the drivers of the buyback is the fact that Kinder Morgan's stock trades for less than 10 times distributable cash flow (DCF) these days, which is well off the more than 20 times DCF it traded at before collapsing in 2015, and below the mid-teens rate of its peers. Investors can buy Kinder Morgan for an excellent price, which will enable them to collect a rapidly growing income stream over the next three years. 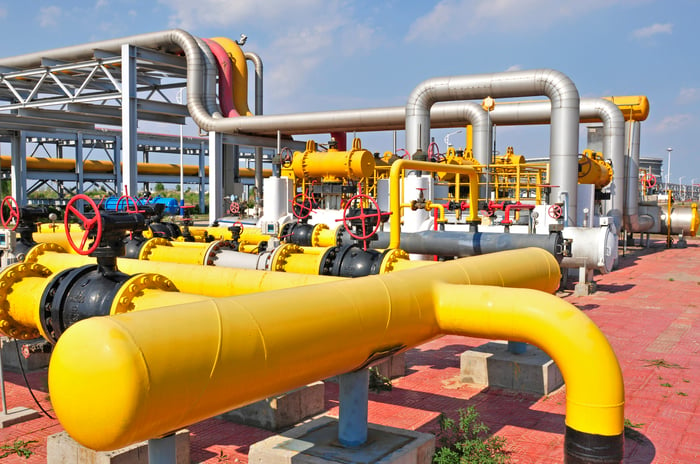 Getting better every day

Shale giant Devon Energy (DVN 0.26%) created EnLink Midstream Partners and its parent EnLink Midstream (NYSE: ENLC) a few years ago to grow its midstream business so it could focus on expanding its oil and gas production. Devon, however, had to slow down when oil prices collapsed, which took EnLink down with it. While units have bounced off the bottom, they still sell for 46% below where they were three years ago. Because of that, investors are only paying a little over 10 times DCF, which is well below the mid-teens rate most rival MLPs trade at these days. That low price is one reason why EnLink Midstream Partners yields an eye-catching 9.4%.

While EnLink's distribution coverage ratio is a tight 1.02 times at the moment, the company expects its cushion to build in the coming quarters as producers on its systems like Devon ramp up their volumes, and it completes some expansion projects. The increased cash flow from those two initiatives should eventually enable EnLink to grow shareholder distributions. However, in the meantime, investors can buy a high current yield for a low price and get paid well while they wait for the upside to materialize.

These bargain income streams might not last much longer

While investors sold off these stocks due to the oil market downturn, all three continued to generate stable cash flow. As a result, they currently sell for dirt-cheap valuations, which enables investors to lock in very compelling dividends. However, those ridiculously low prices might not last all that much longer considering that market conditions are on the upswing, which should eventually bring in more buyers -- especially once this trio begins increasing investor payouts.