In an era of low interest rates, income investors are hungry for yield. One area that has been satiating that appetite for income is master limited partnerships, or MLPs. However, investors should avoid investing in an MLP based solely on its current yield. Instead, investors should look for the following five characteristics in a potential MLP investment.

1. A master limited partnership should have a bounty of fee-based assets

As we've seen over the past year, commodity prices can change on a dime. That can have a devastating impact on companies that derive their income from commodity prices as it fluctuates with those prices. That fluctuating cash flow isn't something income investors want because it could cause an MLP to cut its distribution.

Because of this, investors should seek MLPs that derive most of their income from fee-based assets because this provides stability. A good example of this is Targa Resources Partners (NYSE: NGLS), which continues to steadily grow its fee-based income as we can see on the slide below. 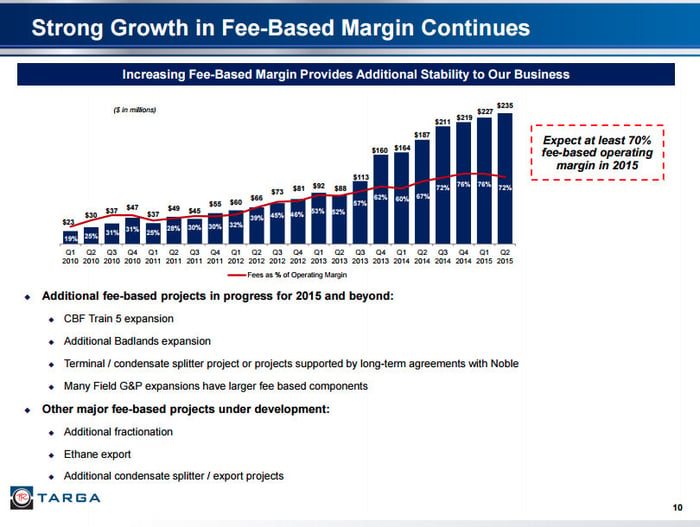 2. A master limited partnership should have a solid balance sheet
Another critical foundation for an MLP is a strong balance sheet. Ideally, investors should seek out an MLP that carries an investment grade credit rating, which as defined by Standard & Poor's is a rating at or above BBB-. However, investors don't need to completely disqualify MLPs that aren't investment rated as some are just not large enough to garner that rating or are in the process of building out several major capital projects that will eventually earn them that rating. As such, another good general rule of thumb is to seek out an MLP that has a debt-to-EBITDA ratio of 4.0 times or less. Using Targa Resources Partners again as an example, it would fit this mold as its debt-to-EBITDA ratio was 3.8 times after its most recent quarter.

3. A master limited partnership should have a strong distribution coverage ratio
Given that income stability is what most income investors seek, it is critical that an MLP investment can continue to pipe consistent income into an investor's portfolio. Because of this, investors should avoid MLPs that are currently paying out more than 100% of their distributable cash flow as any hiccup could lead to a distribution cut. The best metric to review is a company's distribution coverage ratio. Anything below 1.0 means a company isn't fully covering its payout with cash flow while a number above 1.0 times tells us it can cover its current distribution with room to spare.

A good rule of thumb here is to look for a company with a coverage ratio in the 1.05 to 1.1 times range, though higher is, of course, better especially for a noninvestment grade MLP that gets less than 75% of its cash flow from fee-based assets. An MLP that combines both a strong fee-based component and a high coverage ratio is ideal.

One company that currently fits that bill is Phillips 66 Partners (NYSE:PSXP) as virtually all of its income is fee-based while its coverage ratio stood at 1.15 times at the end of the second quarter. This offsets Phillips 66 Partners weaker 4.2 times debt-to-EBITDA ratio. It's worth noting that our previous example of Targa Resources Partners is a bit less secure as its payout ratio is exactly 1.0 times. 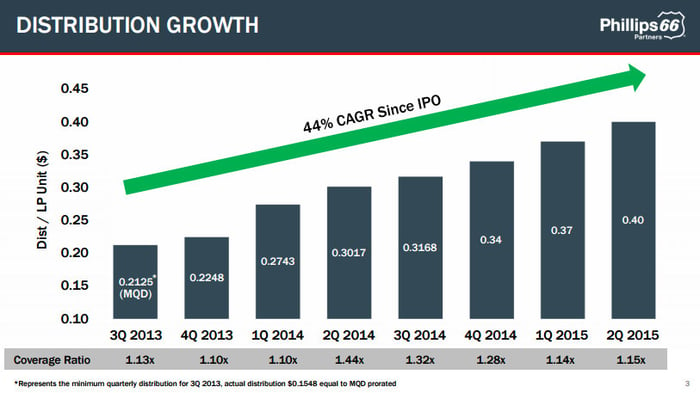 5. A master limited partnership should have a visible project backlog
While a history of growth is nice, a visible backlog of future growth is even better. What investors should seek out is an MLP that has a number of primarily fee-based assets that it intends to build over the next few years. This basically ensures that the company will be able to grow its distribution in the near term without having to rely on acquisitions to drive growth.

Both Phillips 66 Partners and Targa Resources Partners fit this bill. Targa Resources Partners, for example, expects to invest $700 million to $900 million on growth projects this year, which are expected to drive 4%-7% distribution growth. Further, it has identified additional projects totaling $3 billion that could fuel future growth. Likewise, Phillips 66 Partners has strong visible growth both through organic growth projects as well as drop-down acquisitions from its parent company. It expects these assets to push its EBITDA from $300 million to $1.1 billion by 2018, which should fuel a 30% compound annual growth rate for distributions through 2018.

Investor takeaway
Income investors should look for an MLP that has a strong combination of a secure fee-based cash flow, a solid balance sheet, and a conservative payout ratio. Further, it doesn't hurt to have a history of strong distribution growth with a visible project backlog to fuel future growth. Suffice it to say, if an investor can find all five of these characteristics in an MLP they should do very well over the long term.