The difference here may come down to how pending or rumored buyouts play out.

These are turbulent times for the telecommunications industry. There's cutthroat competition among the leading wireless carriers, and the outlook is even murkier for the regional telcos trying to hold on to the thinning ranks of landline customers as they branch out into internet and other related home and business services.

This week we're pitting T-Mobile (TMUS 0.13%) and CenturyLink (LUMN -2.94%) against each other. These aren't the top dogs of telco, but they're not necessarily small fries. T-Mobile is the country's third-largest wireless carrier, commanding an enterprise value north of $82 billion. CenturyLink is a leading local telecom provider, commanding an enterprise value of nearly $36 billion. 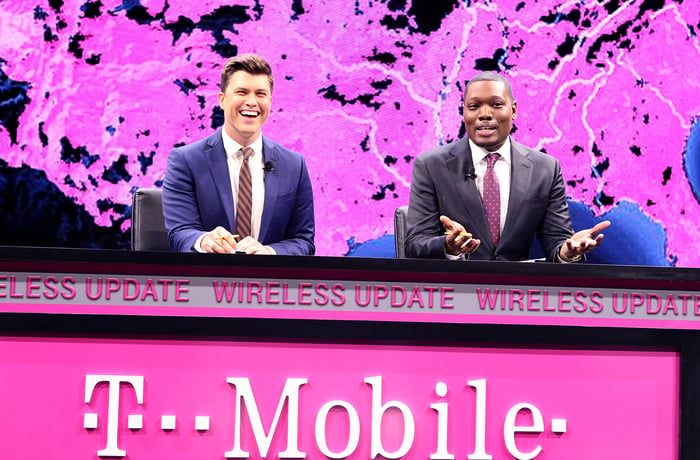 T-Mobile and CenturyLink may seem to be going in different directions. T-Mobile's stock is trading slightly higher this year, though the stock is well off its springtime peak. Analysts see revenue at T-Mobile continuing to move higher with single-digit top-line growth in 2017 and 2018. CenturyLink is heading the other way. The stock is trading lower this year, and analysts see single-digit declines in revenue through the next two years.

Both companies are profitable, and if you were to guess which one pays a dividend it might take you two shots to get it right. CenturyLink packs a beefy yield of 10.7%. T-Mobile does not return money to its shareholders through distributions.

One thing that both companies have in common is they're making the most of the industry's volatility and fragmentation by gobbling up smaller companies to offset organic shortcomings. CenturyLink has acquired Embarq, Qwest, and Tier3 over the past decade. Regulators finally cleared the way for CenturyLink to complete its biggest deal to date, a $25 billion combination with Level 3 Communications (LVLT). T-Mobile is widely expected to announce a merger with Sprint (S) later this month, a deal that would put it within spitting distance of the country's two largest wireless carriers.

T-Mobile seems to have the advantage -- with or without Sprint -- for growth investors, but investors are paying a premium for that octane. T-Mobile trades at 24 times next year's projected earnings. CenturyLink's multiple is just 11, but -- again -- revenue and earnings are going the wrong way for that telco. T-Mobile and CenturyLink are highly leveraged, making it imperative that CenturyLink turn that trend around.

Income investors may want to join the value hounds on Team CenturyLink given the fat yield there, but the sustainability of those payouts is in doubt. CenturyLink hasn't had to cut its dividend since 2013, but it has paid out more in dividends than it has earned for the last six years.

We'll have to see what CenturyLink looks like with Level 3 in its fold come next year. There will obviously be synergies. If T-Mobile and Sprint hook up -- something that the FTC should have no problem clearing since the two carriers would still be the country's third largest provider -- it will also result in some material savings.

There's a lot riding on how T-Mobile and CenturyLink fare in the acquisitions game, but as it stands now T-Mobile is the safer of the two investments. It's the sound choice for risk-averse investors, especially if they don't need quarterly dividend checks. CenturyLink is the far riskier bet, but between the dividends and the potential for multiple expansion, if it's able to turn things around it has the greater upside for risk-tolerant investors. Both stocks have been moving in different directions this year, but catalysts are there for both to beat the market in the year ahead.