The DRIVE PX Pegasus can do more than a quarter of a quadrillion operations per second, enough horsepower for fully autonomous vehicles.

On Tuesday, NVIDIA announced the next step in its plan to power the self-driving car of the future. At the GPU Technology Conference in Munich, NVIDIA unveiled the DRIVE PX Pegasus, a supercharged upgrade to the DRIVE PX system that NVIDIA claims can power full Level 5 driverless vehicles. With a vast increase in processing power, NVIDIA sees Pegasus as the brains behind the self-driving car revolution. 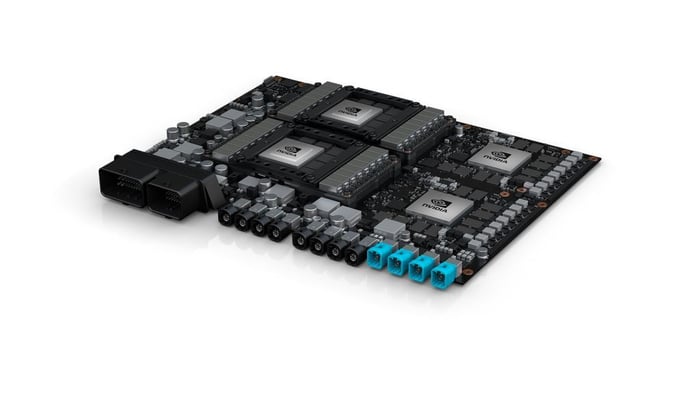 For self-driving cars to be safe and effective, massive quantities of video and sensor data needs to be processed in real-time, with built-in redundancies to reduce the chance of errors. NVIDIA claims that the computing demands of driverless vehicles are "easily 50 to 100 times more intensive than the most advanced cars today."

Two hundred and twenty-five partner companies are now working with the DRIVE PX platform, with 25 of those partners developing fully self-driving robo-taxis. NVIDIA claims that Pegasus, which is the size of a license plate, can replace the racks of servers and enterprise GPUs currently needed to provide enough processing power for autonomous driving.

Pegasus achieves this level of performance by including four processors, including two Xavier SoCs featuring eight custom CPU cores and two next-generation discrete GPUs. Pegasus will be available to NVIDIA's automotive partners during the second half of 2018, including the dozens of companies trying to bring self-driving robo-taxis to market as quickly as possible.

The announcement of Pegasus comes after a few pieces of not-so-good news for NVIDIA's self-driving car efforts. In September, Alphabet disclosed that Waymo, its self-driving car company, has been working with Intel since 2009, using Xeon processors and field programmable gate arrays from the chip giant.

Intel is poised to become a major rival in the self-driving car space, paying more than $15 billion earlier this year for computer vision company MobileEye. The price Intel was willing to pay is an indication of how serious the company is about not missing out on what could be a large and lucrative market.

Also in September, rumors emerged that electric car company Tesla, which has been including NVIDIA's hardware in all its vehicles, was working with NVIDIA rival Advanced Micro Devices to develop in-house self-driving chips. Nothing has been confirmed, but this wouldn't be the first time a company has turned to custom chips for machine learning. Alphabet's Google has been using thousands of custom Tensor Processing Units in its data centers since last year, claiming massive performance improvements over GPUs.

NVIDIA's automotive business is still small, generating less than 7% of the company's total revenue in the latest quarter. With Pegasus not available to partners until late 2018, and with production vehicles featuring the technology likely years away, this announcement won't do anything for NVIDIA's results anytime soon. But the graphics chip company continues to build the foundation of what could be a thriving automotive business down the road.