Shares of J. Jill (JILL 0.51%), a specialty retailer that caters primarily to mature women, hit the clearance rack when they were halved during Thursday's trading session. The culprit for the company's plunge that reached as high as 52% was a fiscal third-quarter sales and earnings update released after the closing bell on Wednesday.

Following the close of trading on Wednesday, J. Jill announced that it anticipates same-store sales will fall 3% to 5% in the third quarter, with adjusted earnings per share (EPS) coming in between $0.08 and $0.10. Comparably, Wall Street had been looking for a same-store sales increase of around 7% and $0.18 to $0.20 in adjusted EPS. 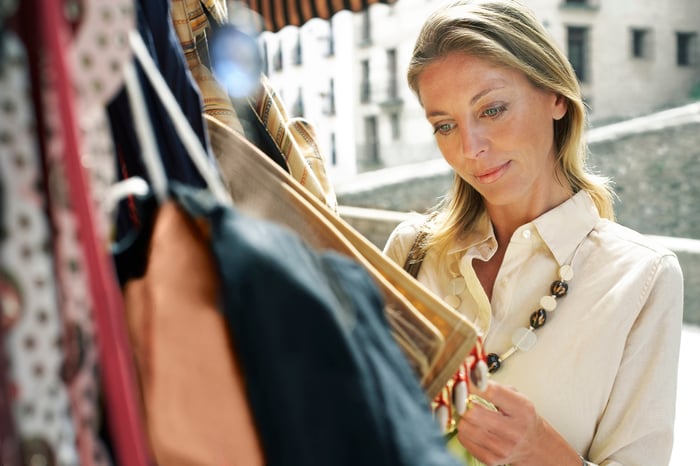 "We have experienced a lower than expected sales trend across both our retail and direct channels, and are updating our guidance for the quarter. We have been assessing the trend change in trend and have identified product and marketing calendar issues that are affecting traffic and conversion, and we are reacting quickly," said CEO Paula Bennett.

The downbeat guidance comes as a bit of a surprise after the company reported a 9.9% increase in sales during the second quarter from the prior-year period. Its Q2 report also featured a 7.8% increase in same-store sales and $0.29 in EPS, which was $0.01 above the Wall Street consensus.

On the surface, a 50% plunge for a halving in quarterly profit expectations might seem a bit excessive. However, the truth of the matter is we don't have all of the facts yet on why J. Jill's business suddenly declined. This could indeed be something as simple as the company bringing in the wrong product or colors that consumers aren't interested in. If this is the case, the sales decline should be a short-term issue.

What's potentially even more disturbing is that the company's press release suggested weakness in both its retail and direct sales. Direct-to-consumer sales represent a growing share of the company's sales, and they're a considerably higher growth opportunity for J. Jill. Problems with direct-to-consumer sales could suggest that the company's data-centric approach to understanding its customers may not be working as well as expected. If this is the case, it could take a bit longer to right the ship.

Put plainly, until we get better clarity on the reasons J. Jill's business declined in Q3, it'd probably be best if investors stuck to the sidelines.