This year, Apple (AAPL 0.00%) delivered some very nice improvements in camera quality with the iPhone 8, iPhone 8 Plus, and iPhone X. Thanks to the combination of a new camera sensor as well as dramatic improvements to the image signal processor inside of the A11 Bionic chip that powers the phones, they can take some impressive photos and videos.

What makes the camera improvements particularly impressive is that Apple delivered them inside smartphones that share the same fundamental form factor as the prior generation iPhones.

Not only was physical space a limiting factor for Apple's sensor and optics design for this year's iPhones, but cost was, too. Since the iPhone 8, iPhone 8 Plus, and iPhone X all share the same basic camera technology, Apple had to engineer the key sensor and optical components to fit within the bill of materials of the relatively low-cost iPhone 8. 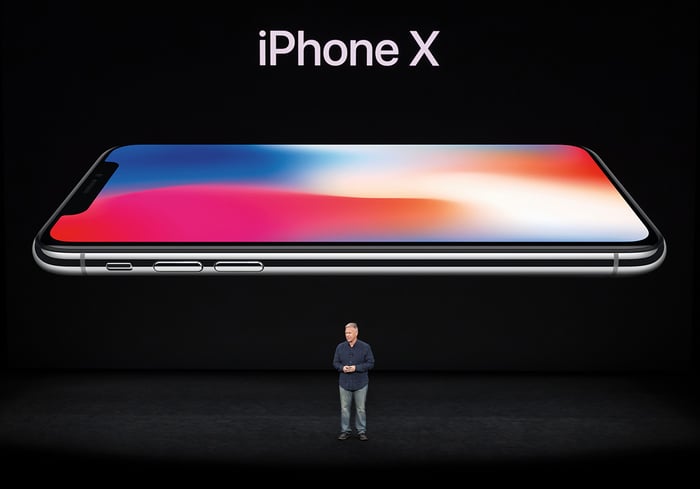 Next year, though, I believe these restrictions will be for the most part lifted, allowing for a dramatic improvement in camera performance. Here's why.

The average price of a new iPhone goes up

Apple is rumored to be planning to launch three new iPhones next year: One with a six-inch liquid crystal display (LCD) at the low end of the product stack, a direct successor to the iPhone X with a 5.85-inch organic light emitting diode (OLED) display, and a larger variant of the iPhone X-style phone with a 6.46-inch OLED display.

The 6-inch LCD model should come in at a lower price point than the 5.85-inch iPhone X, but I doubt it'll start at the modest $699 that the baseline iPhone 8 model occupies today; I think Apple will ask between $749 and $799 for this model and use the older iPhone 8/8 Plus phones to handle the traditional entry-level price points.

The point I'm trying to make is this: The average price of Apple's new iPhones should go up considerably in the coming product cycle, which should allow Apple to use more expensive camera components without hurting its margins.

Another thing to note is that over the last three iPhone generations, Apple has had to build its technologies to fit within the confines of the same basic form factor. The iPhones 6s, 7, and 8 all share the same form factor as the iPhone 6.

Since next year's iPhones should all have new designs, Apple should be able to craft them with enough space to accommodate larger camera sensors and more advanced optics.

Indeed, the iPhone X has a camera bump that's much larger than the one found on the iPhone 8 Plus, which seems to have allowed Apple to add a wider-aperture telephoto lens as well as optical image stabilization.

Expect Apple to take even more advantage of the freedom that new form factors bring to deliver larger leaps in camera performance and capabilities across the iPhone product stack.