Please ensure Javascript is enabled for purposes of website accessibility
Log In Help Join The Motley Fool
Free Article Join Over 1 Million Premium Members And Get More In-Depth Stock Guidance and Research
By Nicholas Rossolillo - Oct 15, 2017 at 11:32AM

A disappointing box office lineup during the summer season has only sent the industry further south.

It has been a forgettable summer for movie theater investors. Ticket sales are down, and as a result, valuations have plummeted for the world's largest cinema operator AMC Entertainment (AMC -5.31%). Things have been a little better for Cinemark (CNK -0.93%) and Regal Entertainment (NYSE: RGC), though they too are trailing the broad market by a wide margin.

Now that the important fourth quarter is here, let's find out if a rebound is in order for the movie business.

The 2017 box office was supposed to be an improvement over 2016. While there have been hits like Walt Disney's Beauty and the Beast and Guardians of the Galaxy Vol. 2, ticket revenue is down 5% compared with the same time last year. The summer box office of 2017 was the worst in a decade, according to industry research company Box Office Mojo.

It may be difficult to get things back on track with the busy fall and winter lineup getting a poor sendoff from Blade Runner 2049, which underperformed during its opening weekend. The sci-fi saga's latest chapter brought in a meager $31.5 million domestically in its opening weekend, compared with hopes of a $45 to $55 million opening. Theater stocks tumbled even further when the weekend numbers were released. 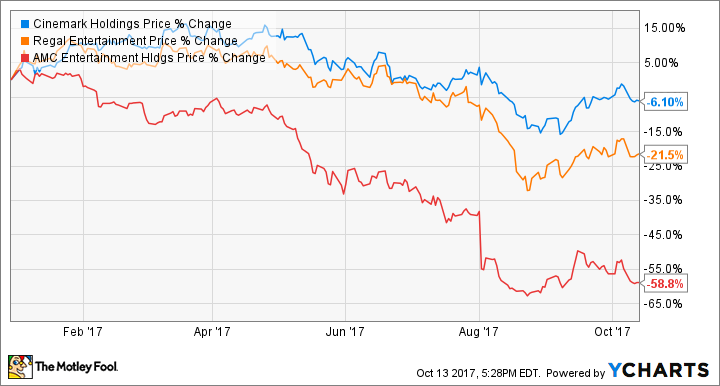 The year isn't over though, and there are a couple potential bailouts in store for theater operators. Since 2012, three out of the five top-grossing films for each year were Disney productions, and 2017 is likely to be awarded to Disney once again. Beauty and the Beast currently holds the top spot, and the entertainment giant still has Thor:Ragnarok coming in November and Star Wars: The Last Jedi slated for December.

Those superhero fantasy flicks have historically drawn big crowds and create long lines at the box office. In fact, the first installment in the new Star Wars trilogy, The Force Awakens, was the first film to gross over $900 million at the domestic box office during its 2015 to 2016 run. If the sequel enjoys similar popularity, all of those patrons could pay off for theater chains.

That's because movie theaters generate significant revenue in addition to ticket sales. AMC, Cinemark, and Regal have all been introducing larger food and drink menus to increase ticket sizes at the concession stand. Average concession revenue per patron has been steadily on the rise over the last few years.

A preview of coming distractions

The theater business is tough, as filling up a screen's auditorium is mostly reliant on what movie studios put out. What films will be successful can be hard to predict, as this past summer proved.

A better bet could be movie producer stocks themselves, like Disney as an example. However, with a promising holiday movie season ahead, Star Wars is just about the closest theater chains can get to a sure thing. But even if The Last Jedi manages to deliver nearly a billion dollars to the domestic box office, volatility will be an ongoing challenge for these stocks.