Unicorns are spawning everywhere in the world.

That's "unicorn" in the financial sense -- an early-stage company valued at over $1 billion. One of these rare creatures, Singapore-headquartered Sea Limited, will land on our shores after a splashy IPO. That's coming soon, so let's take a closer look at the company and its issue.

Swimming on top of the market

Sea Limited, known until recently as Garena, was founded in 2009 as an online games portal. Today's Sea Limited makes the bulk of its revenue from digital entertainment -- in fact, the digital-entertainment division retains the name Garena -- mainly by selling in-game items to players of its 18 titles.

In a logical outgrowth of that activity, Sea Limited has also branched out into e-commerce and digital financial services. Its brands in these segments are known as Shopee and AirPay, respectively.

Sea Limited operates in its native region of greater Southeast Asia (GSEA), consisting of Indonesia, the Philippines, Vietnam, Thailand, Malaysia, and Taiwan, in addition to Singapore. All told, around 585 million souls live in the neighborhood. 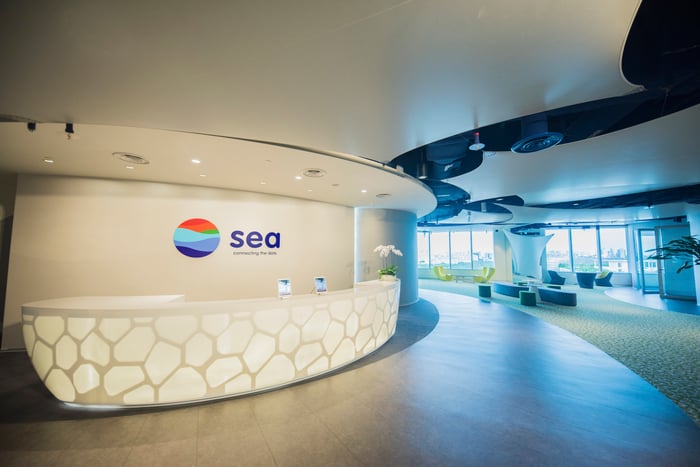 The company proudly claims to be GSEA's top provider of digital entertainment in terms of revenue, and No. 1 in the e-commerce space when measured by gross merchandise value and number of orders. It also says it's the winner in the digital financial-services segment, in terms of e-wallet gross transaction value (GTV).

Overall, Sea Limited's revenue has risen steeply over the past few years. The annual top line more than doubled from 2014 to 2016, ending up at almost $346 million in the latter year. The e-commerce and financial-services realms combined still form only a small fraction of revenue (5% in 2016), although they're growing at almost twice the rate of the entertainment wing.

Sea Limited hasn't been profitable, however. Net loss deepened from $88 million in 2014 to $103 million the following year, to nearly $223 million for 2016. Much of the blame can be laid at the feet of sales and marketing expenses, and general and administrative costs. These two cost items grew at faster rates than revenue.

What to expect from Sea

Sea Limited's status as the big e-gaming player in the region is helped greatly by its position as a regional distributor for League of Legends, the wildly popular multiplayer fantasy title from Tencent Holdings (OTC:TCEHY) unit Riot Games.

Tencent, by the way, is a top shareholder of Sea Limited. The monster Chinese internet conglomerate will hold around 30% of total voting power after the IPO; company founder Forrest Li, along with other top executives, will own just over 52%. Potential investors need to be aware of this heavy concentration.

Sea Limited touts research from Frost & Sullivan indicating that the GSEA game market will grow at a compound annual growth rate (CAGR) of almost 20% between 2016 and 2021. The e-commerce space should expand at a 29% clip, and the company quotes a 30% CAGR estimate from IDC for e-wallet payment volume.

I have little doubt Garena will reap the benefits of the anticipated rise in gaming, but I'm not so sure about the other two units.

AirPay, meanwhile, has potential. But despite its No. 1 position in the market, the AirPay app is available only in Thailand, Vietnam, and and Taiwan. Sea Limited says it "expect[s] to expand our AirPay services to other GSEA markets in the future." That vague pronouncement indicates to me that it's not in a great rush.

Nevertheless, I think Sea Limited has plenty of potential in its core gaming segment alone. So despite those losses on the bottom line, the company represents a strong play in a thriving region that's often ignored. Consequently, I think there will be much interest in this stock, and good potential for it to rise in price.

Sea Limited is selling just under 49.7 million American depositary shares (ADS) in an offering, at a price of $12 to $14 per ADS. They should start trading on Friday, Oct. 20, on the New York Stock Exchange under the ticker symbol SE.

The lead underwriters of the issue are Goldman Sachs, Morgan Stanley, and Credit Suisse.