Please ensure Javascript is enabled for purposes of website accessibility
Log In Help Join The Motley Fool
Free Article Join Over 1 Million Premium Members And Get More In-Depth Stock Guidance and Research
By Daniel B. Kline – Updated Oct 17, 2017 at 9:29AM

The largest shopping-center owner in the country has plans for a new kind of store.

Before the so-called "retail apocalypse" began causing havoc with mall stalwarts, leaving holes in even high-end shopping centers, top-tier operators like Simon Property Group (SPG 0.91%) held a lot of power. They could demand long-term leases, fairly inflexible terms, and sometimes even a cut of the profits.

That's because while some older shopping centers struggled, through the 1990s and into the early part of the current decade, malls have been a growth business. Over the last 20-plus years, in fact, retail sales have steadily (and dramatically) grown, which helped companies like Simon, the largest mall operator in the United States.

Now, of course, retail has changed. The rise of digital, led by Amazon, has caused mall staples including Radio Shack, Abercrombie & Fitch, Sears Holdings (NASDAQ: SHLD), BCBG, Gymboreee, and Macy's (NYSE: M) to either close entirely or shutter stores. That's only a sample of the chains closing locations in 2017, with more closures expected in years ahead.

That has forced mall operators to become more clever when it comes to filling open locations. Simon has joined that fray with a new, turnkey concept at one of its iconic malls that may be a major sign of things to come. "All a brand needs to go 'live' is product and a desire to tap into a new live customer base. Shoppers will be able to interact with brand ambassadors who will be on hand to provide product information, brand storytelling and convert sales," Simon noted in a press release. 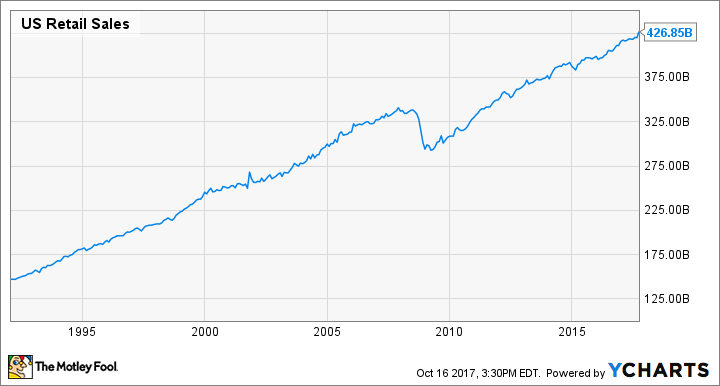 Retail sales are growing, but some of them are moving to digital sellers. Data source: YCharts.

What is Simon doing?

The mall operator has created a new type of store at Roosevelt Field Mall on Long Island. Called "The [email protected] Field," the concept offers both established and emerging brands a way into the mall. The company described the new store as "an interactive and experiential retail space that blurs the lines of physical space."

It's a Simon-run store that's designed to bring new retailers and products into the mall. It will have a changing lineup of companies participating, including some previously online-only brands making a first jump into brick-and-mortar.

Each brand featured at The [email protected] Field will have between 20 and 200 square feet of display space. Each company or product will have its own branding, while being able to use custom-designed modular fixtures, and digital media walls. Simon calls the concept a turnkey micro retail model and it will provide staffing for brands that can't provide their own.

"This concept is a design-centric, experience driven, and completely transitional place to discover new product and technology in a brick and mortar space," said Simon's national director of business development, Zachary Beloff, in the press release.

The selection of brands will rotate. The initial collection is still being worked on, but it will include Raden Smart Luggage, millennial-focused Skinnydip London, menswear brand Vitaly, athletic apparel company Rhone, beauty brand Winky Lux, and contemporary art gallery Uprise Art. Simon has partnered with Appear Here, a company that connects brands to short-term retail space to handle the process of bringing retailers on board.

The [email protected] Field opens in November. It will be about 3,500 square feet. 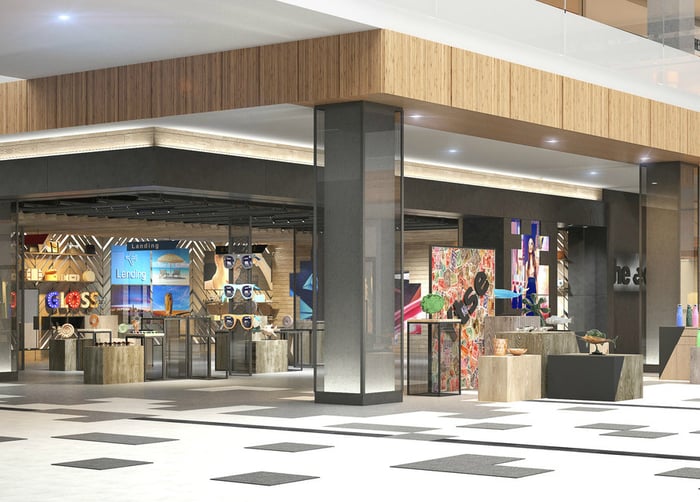 The new store will have a rotating cast of merchandise for sale. Image source: Simon Properties Group.

Is this the future of malls?

In launching this space, Simon is sort of flipping the mall model. Instead of simply renting space to retailers, it's creating a new kind of retail store and doing some of the work for the brands that want to participate.

Simon said its goal is to "simplify the process for people looking to bring their retail ideas to life" by making getting into one if its malls "as easy as booking a hotel room." That's a big change from how the company previously worked and it pushes the company well beyond a traditional landlord role.

Chains like Macy's and Sears may survive, but they're not going to grow. Other retailers may emerge to take their spots, but if mall operators hope to thrive, they need to find innovative ways to fill space that get consumers to leave their homes. This new store concept may well be that and it could be a big part of how Simon keeps its upscale malls relevant as some of its tenants shutter locations, or close entirely.