Two cloud players and an alternative energy company could offer up wealth-creating returns.

A decade ago, the term "software as a service" wasn't common in investing vernacular. Marc Benioff, founder and CEO of salesforce.com, was one of the first Silicon Valley leaders to bring it to the fore. Today the term is so popular that we've shortened it to "SaaS."

Cloud-based software has been a powerful force for investors. Those who bought shares of Salesforce.com back in August of 2004 -- just after the company went public -- have bagged a 3,400% return. By exploiting the cloud, the company found a relatively capital-light way to provide its clients with software that helps run their businesses. 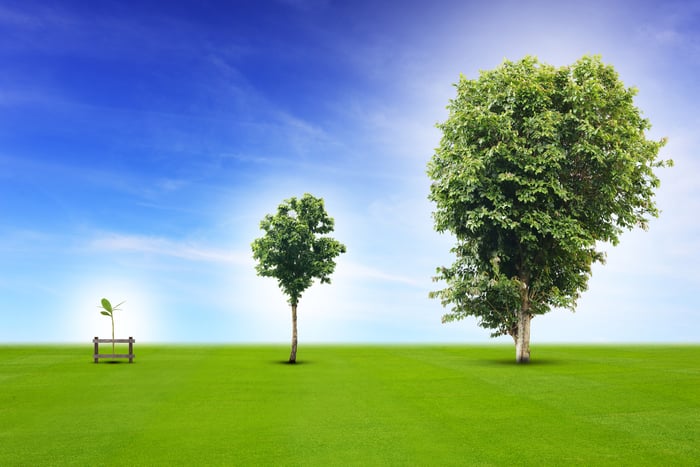 Below, three Motley Fool investors will tell you about stocks they believe have the potential to create Salesforce-like returns for patient investors: Veeva Systems (VEEV 3.06%), Atlassian (TEAM 5.39%), and First Solar (FSLR 0.03%).

It has Salesforce in its DNA

Brian Stoffel (Veeva Systems): It's fitting to start with Veeva. The company was founded -- and is currently run -- by former Salesforce executive Peter Gassner. When Gassner was working for Salesforce, he noted that one subset of clients had cloud needs so specific that Salesforce was ill-equipped to meet them: the pharmaceutical industry.

So Gassner formed Veeva with the explicit goal of changing that. He started out by focusing on customer relationship management tools -- dubbed "the commercial cloud" -- and expanded over the last three years into the real jewel of Veeva's offerings, Veeva Vault.

Vault has several subcategories. Clinical, medical, and regulatory are three of the biggest. Drug companies that sign on to use Veeva's products can track all of the relevant information -- from ideas to trial results to matching the regulatory framework -- as they bring a product to market. Once they sign on, companies face high switching costs.

Based on revenue results, the offerings are a big hit.

And here's the real kicker: Vault has been so popular that companies from outside the pharmaceutical industry are asking for access. In response, Veeva recently introduced Vault QualityOne, a solution for customers in the consumer packaged goods, manufacturing, or other heavily regulated industries. In time, not only could Veeva produce Salesforce-like results, but it might eat into Salesforce's own growth as well.

Tim Green (Atlassian): Salesforce is one of the largest providers of software as a service and has rewarded investors with consistent double-digit growth over the years. There are plenty of smaller SaaS companies, but few stand a chance of ever producing the same kinds of returns.

Atlassian, the company behind a variety of productivity and collaboration products, is one of the promising ones. The company grew revenue by 36% in fiscal 2017 to $620 million, and it produced strong free cash flow of $183 million thanks to its subscription business model and plenty of stock-based compensation. GAAP earnings are negative, but that's not necessarily a big concern. Salesforce has posted a loss in four of the past five years, yet the stock has been soaring.

One big move Atlassian made in the past year was its $425 million acquisition of Trello, a popular collaboration and project management tool. Trello sported about 19 million users earlier this year, giving Atlassian the opportunity to convert some of those users into paying customers. Trello fits in well with Atlassian's other products, like team communication service Hipchat and software development tool Jira.

Atlassian is still a long way from becoming a software behemoth like Salesforce, and the stock is far from cheap, trading for around 13 times sales. But as long as Atlassian can keep up its double-digit growth rate, investors will likely be happy with the result.

The shift in global energy production will be huge

Tyler Crowe (First Solar): I am one of the people who think that we are on the cusp of the long-awaited breakthrough for the solar industry. For years the theory was that solar would take off once it was able to compete on cost with traditional fuel sources without subsidies. Well, that time has come.

According to advisory group Lazard, the levelized cost of energy for utility-scale solar installations is lower per kilowatt-hour than the cost of any fossil fuel option out there. Today, the only less expensive source is wind power. But energy-storage costs have declined at a rate similar to what we've seen with the cost of solar- and wind-power generation, making it cheaper to use solar power 24/7.

Now that we have passed this critical cost threshold, solar is much more likely to be deployed at much faster rates. That bodes well for solar panel manufacturer First Solar. With its next-generation Series 6 panels set to come to market by this time next year, the company is set to increase total production capacity from 3 gigawatts annually to 5 gigawatts in the next few years, which should drive significant increases in revenue.

Another sign that suggests First Solar could grow like Salesforce over the long term: It is one of the few solar panel manufacturers and developers that has been able to consistently generate profitable results and the best rates of return for its investors. Much of the investment thesis for new technologies like solar rests on the ability of a company's management team to deliver results. First Solar has been able to fulfill that expectation better than any other solar company.

The opportunity in energy is immense -- about $10 trillion between now and 2040, according to Bloomberg. If First Solar can capture a decent fraction of those investment dollars, the stock will be poised to do incredible things.