Both Ubisoft (OTC:UBSFF) and Take-Two Interactive (NASDAQ:TTWO) have delivered mouthwatering gains for shareholders over the past five years. Just feast your eyes on this chart showing five-year stock gains over more than 700% for each: 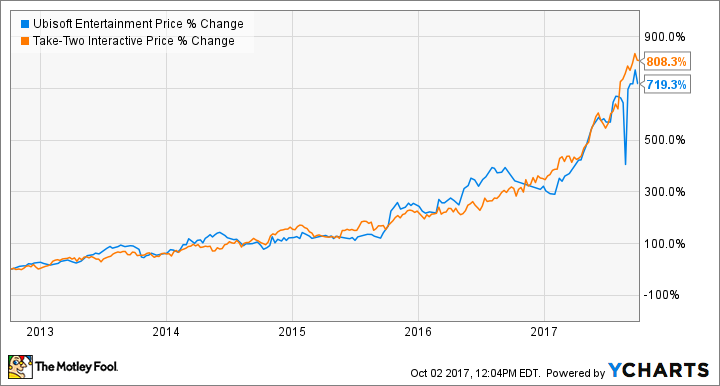 Read on to find out which stock is the better buy now.

Ubisoft is headquartered in Paris and has built a large following based on its popular Tom Clancy shooters and the Assassin's Creed franchise. In the coming months, Ubisoft has a few potentially big hits hitting digital shelves in Assassin's Creed: Origins, South Park: The Fractured But Whole, and Far Cry 5. With a strong lineup of new releases coming up, management is calling for revenue to grow 44% from the fiscal year ending in March 2017 to the year ending in March 2019. 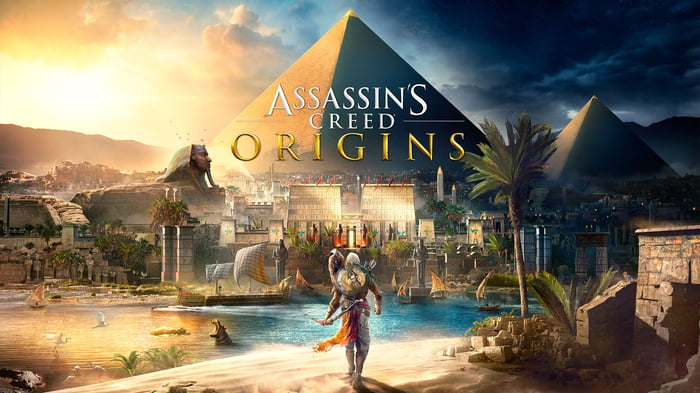 As the industry shifts to a digital distribution strategy, Ubisoft has seen its business grow from barely scraping by to generating a healthy amount of profit based on cash flow from operations, which shows the actual amount of cash a company generates over a given period.

Digitally delivered game purchases made up 50% of total revenue at the close of the most recent fiscal year, and it's expected to increase as a percentage of total revenue over the next few years. Digitally delivered content costs relatively little compared to the cost of making the game originally, which is good for Ubisoft's ability to generate higher margins. The digital trend continued to play out in the first quarter of fiscal 2018, as digital revenue totaled 80% of total sales, slightly higher than the year-ago quarter's 75% of total sales.

Along with its larger peers, Ubisoft has been entering new money-making opportunities, including the mobile game market. Mobile games made up only 7% of Ubisoft's fiscal 2017 revenue, but as Ubisoft grows more profitable, expect this percentage to grow. 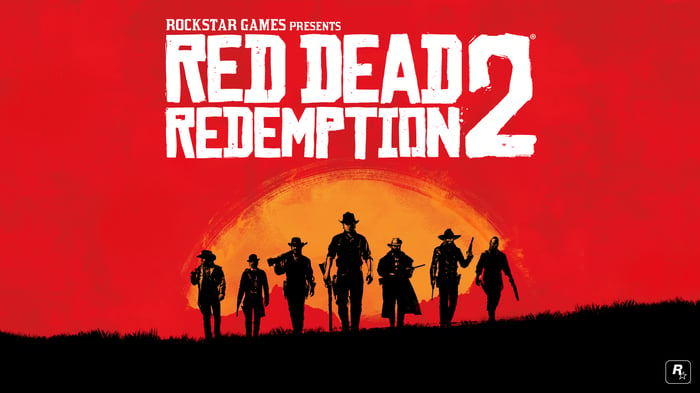 Take-Two is best known for its Grand Theft Auto franchise, one of the best-selling game series of all time. The latest installment has sold more than 80 million copies since its late 2013 launch. Other games that have been important to Take-Two's bottom line in recent years are NBA 2K, WWE 2K, Sid Meier's Civilization, Red Dead Redemption, and Borderlands.

As with Ubisoft, Take-Two derives a much greater percentage of its annual revenue from digital in-game purchases than in the past. Since fiscal 2011, Take-Two's digital revenue as a percentage of total revenue has increased from 9% to 52% at the end of fiscal 2017, which closed in March. This has translated to greater amounts of cash from operations, as seen in this table.

Take-Two is also getting involved in other growth opportunities besides console games. Earlier this year, Take-Two purchased mobile-game maker Social Point for $250 million. Additionally, the NBA and Take-Two announced a professional gaming (esports) league based on the top-selling NBA 2K franchise.

Both Ubisoft's and Take-Two's stock prices have soared in recent years, sending valuations higher as well, so the investment case for both companies centers around high growth expectations. This places importance on management's expectations for growth. Since both companies emphasize cash flow instead of net income in their guidance, we're going to look at Ubisoft and Take-Two on the basis of price-to-free-cash flow, as opposed to the more traditional price-to-earnings ratio.

Ubisoft's stock has soared recently based on expectations for strong growth over the next few years, as promised by Ubisoft management.  For fiscal 2019, Ubisoft expects revenue to reach 2.1 billion euros and free cash flow (cash from operating activities minus capital expenditures) of around 300 million euros. Using management's guidance, Ubisoft currently trades for about 26 times expected free cash flow for fiscal 2019.

Take-Two management is expecting to hit $2.5 billion in revenue and $700 million in cash from operations for fiscal 2019, which is based on the anticipation of strong sales for Red Dead Redemption 2. The stock currently trades for less than 20 times expected free cash flow for fiscal 2019, which makes it a cheaper stock compared to Ubisoft.

Take-Two seems like the safer bet at this time, making it the better buy.