Please ensure Javascript is enabled for purposes of website accessibility
Log In Help Join The Motley Fool
Free Article Join Over 1 Million Premium Members And Get More In-Depth Stock Guidance and Research
By Adam Levine-Weinberg - Oct 18, 2017 at 5:40AM

Hawaiian Holdings will begin paying a quarterly dividend of $0.12 per share this quarter.

In the decade after 9/11, while most of its competitors were going bankrupt, Southwest Airlines (LUV 0.10%) was the only major airline to continue paying a dividend. However, in the past five years, many airlines have started to pay quarterly dividends again. This has been a way for airlines to reward their long-suffering shareholders -- and demonstrate confidence that their return to profitability is sustainable. On an annual basis, the payout of $0.48 per share represents a dividend yield of 1.2%, based on Hawaiian's recent stock price. While that's a relatively modest yield, it's roughly in line with the airline industry average and ahead of the sub-1% yields currently offered by Southwest Airlines stock and American Airlines stock.

The dividend creates an annual cash commitment of about $26 million. This will be very affordable for the company. Hawaiian Holdings has dramatically reduced its debt load in the past few years, and it has been generating more than $400 million of operating cash flow annually since 2015. 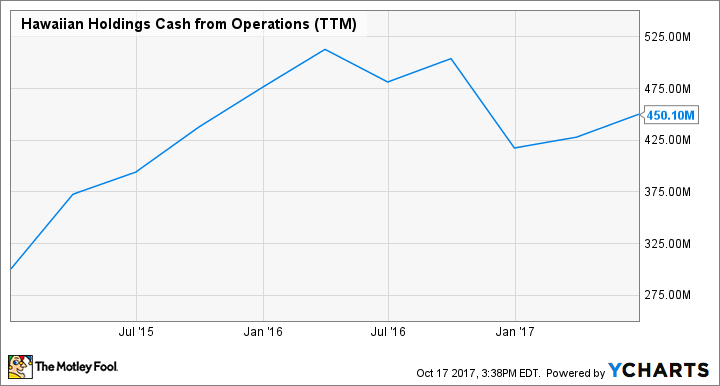 Some investors found the timing of Hawaiian's dividend announcement suspicious, as it came not even 24 hours after Southwest Airlines revealed plans to start flying to Hawaii in 2018. From this perspective, the dividend could be seen as an attempt to distract shareholders from a big threat looming on the horizon.

However, as CEO Mark Dunkerley pointed out, the timing of the dividend announcement was coincidental. After all, the dividend had to be discussed and approved at a meeting of the company's board of directors, which happened well before the Southwest Airlines news broke.

Additionally, as I have discussed previously, Southwest's entry into the West Coast-Hawaii market may not impact Hawaiian Airlines' long-term profitability very much. First, Southwest Airlines won't enjoy a massive cost advantage on flights to Hawaii. Second, while Southwest will be able to tap into its huge customer base on the West Coast, Hawaiian Airlines also has some key competitive advantages -- like a large inventory of extra-legroom seats for sale.

A great opportunity for long-term investors 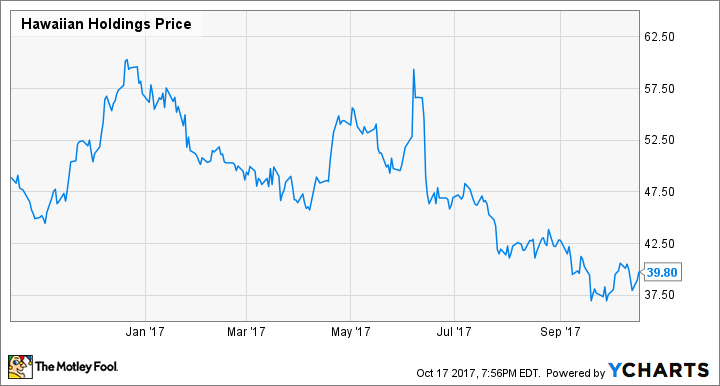 Mr. Market is clearly worried about the impact of increased competition on Hawaiian's profitability. In addition to Southwest's looming entry into the market, United Continental is planning to significantly increase its capacity to Hawaii starting in December.

However, investors may not be giving Hawaiian Airlines enough credit. The carrier has a lot of tools to offset the incremental competitive pressure it will face. For example, by early 2018 it will finish retrofitting the last of its A330s with lie-flat first class seats and 28 additional extra-legroom seats. The shift to a premium-heavy configuration has been a key factor behind Hawaiian's strong unit revenue growth this year, and it will continue to be a tailwind next year.

Meanwhile, the arrival of Hawaiian Airlines' A321neo fleet over the next two and a half years will enable the carrier to more precisely tailor capacity to demand on its West Coast-Hawaii routes. It will also allow Hawaiian to retire its fleet of aging (and less efficient) 767s.

In other words, Hawaiian Holdings' earnings may be more resilient than many investors expect. By actively buying back stock -- and now implementing a dividend -- Hawaiian is rewarding patient investors who stick with the company despite the rising competition it may face in the next year or two.