With banks demanding interest rates as high as 13% for new debt, the Nordstrom family has called off its attempt to lead a leveraged buyout of Nordstrom.

In June, Nordstrom (JWN -1.75%) stock rocketed higher from the $40 level to around $48 after members of the founding family announced they were interested in taking the company private.

Since then, Nordstrom shares have given back all of their gains as a steady stream of media reports indicated that the Nordstrom family was having trouble arranging the necessary financing. This culminated in an announcement on Monday that the family is suspending its buyout attempt at least through the end of the year. 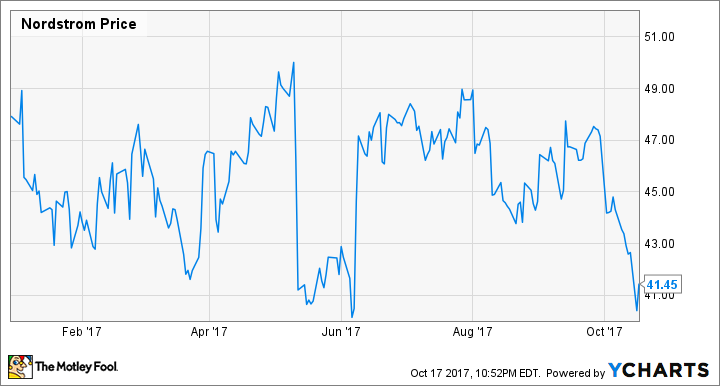 While this result may seem like a major blow to Nordstrom shareholders, it's merely a reflection of the broader state of uncertainty (and even panic) among retail investors. If Nordstrom can keep putting up solid results, shareholders will do well with or without a buyout.

The outline of the Nordstrom family's plan

While Nordstrom has been a public company since the early 1970s, members of the founding family still own more than 30% of the retailer. Furthermore, three Nordstrom brothers manage the company's day-to-day operations as co-presidents.

The Nordstrom family planned to hold on to its equity stake in the proposed buyout deal. It also recruited private equity firm Leonard Green & Partners to contribute an additional $1 billion in equity. However, the family still needed to raise as much as $7 billion of high-yield debt to fund the deal. This has proven to be the proposed buyout's Achilles' heel.

A lot of leveraged buyouts in the retail sector have run into financial trouble recently. This isn't especially surprising. Companies with high debt loads are typically ill-equipped to cope with sales downturns.

For example, luxury department store Neiman Marcus has been teetering on the brink of bankruptcy for the past year or so. The company's private equity owners had loaded it up with about $5 billion of debt, magnifying the damage from a recent sales slump. Elsewhere in the retail world, Toys "R" Us filed for bankruptcy last month. It, too, was hampered by $5 billion of debt from an ill-timed leveraged buyout.

As a result, banks are now extremely nervous about committing capital to a leveraged buyout in the retail sector. Indeed, while the Nordstrom family shopped around for several months, prospective lenders were demanding a usurious interest rate of around 13%, according to Bloomberg. It's hard to imagine a scenario in which accepting that kind of interest rate would make sense compared to staying the course as a public company.

Fortunately, there's more to the investment case for Nordstrom than hoping to receive a premium in a leveraged buyout. The Nordstrom family plans to revisit the buyout idea after the holiday season, but Nordstrom stock looks undervalued even if a go-private deal is off the table.

First, the company's free cash flow exceeded its adjusted EPS by 45% last year. Free cash flow may continue to outpace adjusted EPS (by a more modest amount), as capex moderates following years of heavy investment. Second, Nordstrom has been incurring costs in recent years related to growth initiatives such as expansion into Manhattan and Canada and building up an off-price e-commerce business. These quasi-investments are likely to pay off in the next few years, driving free cash flow growth.

The Nordstrom family's effort to take the company private may fail. But that shouldn't count as a mark against the company. It's just one more demonstration of how most investors are underestimating Nordstrom's long-term prospects.