Please ensure Javascript is enabled for purposes of website accessibility
Log In Help Join The Motley Fool
Free Article Join Over 1 Million Premium Members And Get More In-Depth Stock Guidance and Research
By Lee Samaha - Oct 19, 2017 at 9:33AM

Here's what the industrial company needs to do to support its lofty market rating.

Given that 3M Co (MMM -0.71%) and its fellow multi-industrial company Illinois Tool Works Inc. (ITW 0.35%) trade at a premium compared to earnings multiples in the last decade (see below) there will be increased pressure on both companies to deliver in the coming quarters. Focusing on 3M, let's take a look at the three things investors need to look out for when the company reports earnings on Oct 24th. 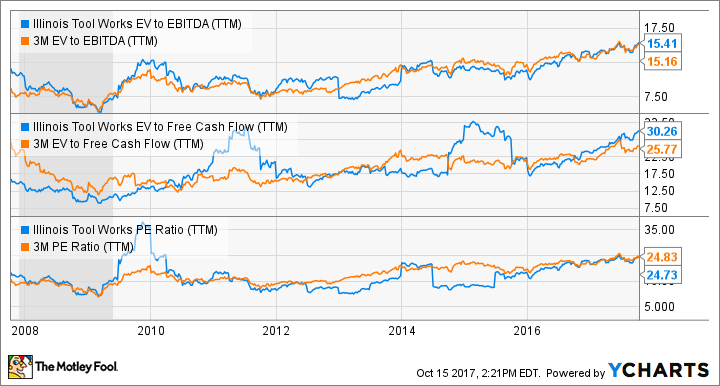 3M Co reports out of five different segments, and in the chart below, you can see the organic local currency growth trends for each segment. The good news is 3M has raised full-year organic sales growth forecasts in the last two earnings reports -- the company started the year predicting 1% to 3% organic local currency sales growth but has since upgraded its estimate to 3% to 5%. 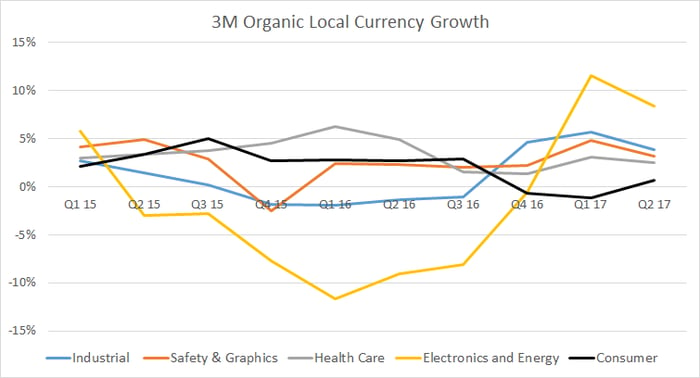 3M raising full-year guidance is obviously a net positive, but the trend of raising guidance might not necessarily continue, and here's why.

The electronics & energy segment has led growth, but now that the recovery in energy capital spending and U.S. industrial production is in place, 3M could find it difficult to generate the kind of 10% local currency sales growth produced by the segment in the first half.

Similarly, Illinois Tool Works has benefited from an improvement in its more cyclically aligned segments--such as welding and test & measurement and electronics-- and this could slow in the future as industrial production growth slows.

3M's industrial segment has automotive exposure, and with North American auto production and sales expected to weaken in the second half, Illinois Tool Works has already prepared investors for a weak quarter in its automotive operations. However, one side effect of the storms and flooding in North America could be higher demand for 3M's auto solutions.

All told, it's hard to know just what 3M's industrial segment will report.

Finally, as you can see above, the consumer segment -- traditionally a strong area for the company -- has been weak in 2017. Management has spoken of "inventory reductions" in the industry, an argument suggesting that the segment's growth could bounce when its customers start to replenish inventory. Ultimately, 3M needs to demonstrate that it can get its consumer segment back in growth mode. China is a wildcard

In common with many other industrial companies, 3M benefited from better-than-expected GDP growth in China and the greater Asia-Pacific region (APAC). It matters to 3M as 29% of 2016 sales came from the region. Moreover, APAC grew local currency organic sales by 10% in the first half compared to just 1.6% from the U.S. -- note that around two-thirds of energy & electronics sales go to APAC while the consumer segment relies on a similar amount from the U.S.

However, market analysts are predicting China's GDP growth will slow in the second half, and this could spoil the growth party for many industrial companies, including 3M Co and Illinois Tool Works. The latter's international organic revenue grew 5.2% in the first-half compared to just 1.4% from North America, suggesting an increasing reliance on markets like China for growth.

As you can see in the chart below, total company organic sales growth has picked up in 2017, but it's interesting to look at just how it's happened. The last three quarters have seen volumes increasing, but pricing has turned negative. 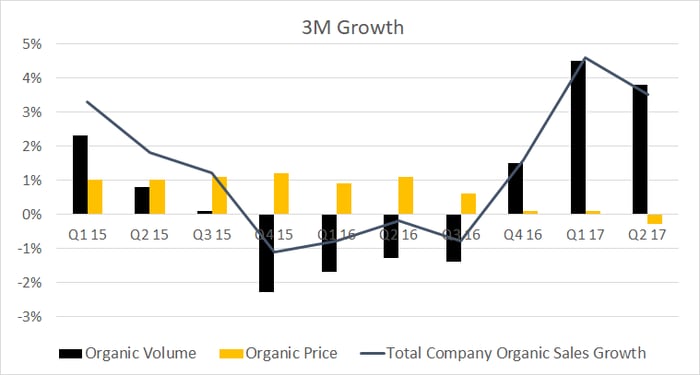 Why is this an issue for 3M Co? The reason it matters is it suggests 3M is losing pricing power, and if its end markets start to weaken -- taking volume growth down with it -- then the company's sales growth could be significantly affected.

Management answered a slew of questions on the subject from analysts on the last earnings call amid suggesting that pricing actions were taken deliberately by the company in order to make 3M more "competitive" and "agile." However, it really doesn't matter how management addresses the issue -- the fact is, pricing has deteriorated. Ultimately, investors will want to see improvement before concluding that 3M isn't suffering some sort of pricing erosion, possibly from its products becoming commoditized.

The earnings reports from 3M Co and Illinois Tool Works are always interesting because as multi-industrials, their numbers and commentary will give many clues as to the investing themes that will work going forward. Declining U.S. auto production will surely affect sections of the industrial sector -- watch 3M's and Illinois Tool Works' auto-based sales. Moreover, it's hard to tell where China's GDP growth will end up in the quarter.

Meanwhile, 3M needs to convince investors its consumer segment is back on track and that it doesn't have issues with pricing. All told, 3M has to execute in order to justify its high rating.