Over the summer, Facebook (NASDAQ:FB) said it would begin testing paywalls for publishers in an effort to deepen its relationship with the media. Head of News Partnerships Campbell Brown announced that Facebook was building a subscription product for Instant Articles at a digital publishing conference in July. In the age of social media, Facebook has become an incredibly important distribution channel for digital publishers (including The Motley Fool), but the challenge has always been finding a way for publishers to monetize that distribution.

A few months after Brown confirmed the plans, the social network has now officially announced that it has commenced testing the subscription offering. The company has signed up 10 prominent news outlets, including The Washington Post, The Telegraph, and The Economist, as well as tronc publications like The Los Angeles Times, to test out the platform. 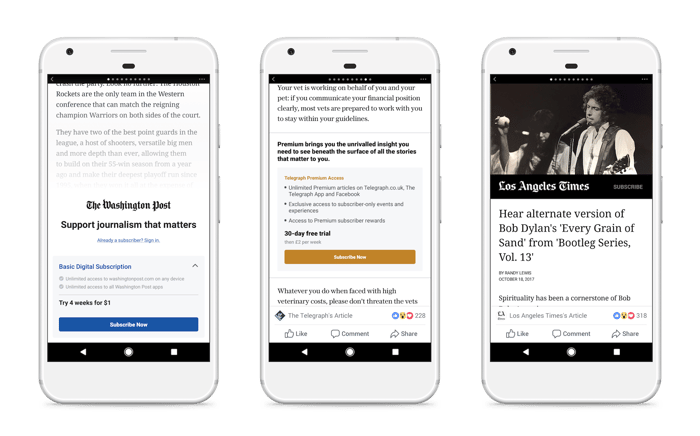 Facebook will support a couple of different ways to play with the paywall. Publishers can either use a metered model where the first 10 articles are free, or a freemium model where the publisher chooses which articles are free and which are locked behind a paywall. Facebook notes that publishers identified several critical factors to get onboard: "We also heard from publishers that maintaining control over pricing, offers, subscriber relationships, and 100% of the revenue are critical to their businesses, and this test is designed to do that."

When a non-subscribing user runs into an Instant Article that's behind a paywall, they will be prompted to subscribe. If the user chooses to subscribe, they will subscribe directly through the publisher's own website. Facebook will not process the transaction itself, and importantly will get no cut -- publishers keep 100% of all revenue, just like they asked for. That's a pretty huge concession, and goes a long way toward strengthening Facebook's relationship with publishers. The publisher maintains control of the relationship with the subscriber.

Not everyone is receptive, though. Reuters notes that many publishers like The Wall Street Journal and The Financial Times are remaining on the sidelines since Facebook won't hand over reader data until the reader subscribes. Getting that data can provide publishers with a way to continue pitching subscriptions to the user after that initial point of contact.

For now, the test will only be on Android because Facebook disagreed with Apple (NASDAQ:AAPL) over terms, according to Recode. Apple demands a 30% cut of all subscriptions that go through its platform, which drops to 15% after the first year, including this new paywall test.

This is the risk that Facebook has always faced with building most of its business on top of third-party mobile platforms. Consider this risk factor legalese that has been a mainstay of Facebook's SEC filings for years:

We are dependent on the interoperability of Facebook and our other products with popular mobile operating systems, networks, and standards that we do not control, such as the Android and iOS operating systems. Any changes, bugs, or technical issues in such systems, or changes in our relationships with mobile operating system partners, handset manufacturers, or mobile carriers, or in their terms of service or policies that degrade our products' functionality, reduce or eliminate our ability to distribute our products, give preferential treatment to competitive products, limit our ability to deliver, target, or measure the effectiveness of ads, or charge fees related to the distribution of our products or our delivery of ads could adversely affect the usage of Facebook or our other products and monetization on mobile devices.

Apple has strict rules around directing users to buy products and services outside of its App Store, so even though Facebook would be sending users to publisher sites to subscribe, Apple can still play hardball because the process would start within Facebook's iOS app. Many publishers already acquiesce to Apple's terms and offer subscriptions through their own apps, and probably greatly appreciate Facebook advocating for their businesses.

Still, it does seem that if Facebook's subscription platform gains traction, then the social network would eventually ask for a cut of subscriptions that it helps sell. That's the whole point of operating a platform, after all, which entails costs. How that might work in conjunction with Apple's terms remains to be seen. For the time being, Facebook will continue negotiating with Apple, while trying to give publishers exactly what they want.