Just because Facebook (NASDAQ:FB) is "free and always will be" doesn't mean the content distributed through the social network will also be free. The company is now signaling that it will allow publishers to set up paywalls within Facebook for their articles, according to TheStreet. Campbell Brown, who joined Facebook in January as head of news partnerships, detailed the plans at a digital publishing conference yesterday.

"One of the things we heard in our initial meetings from many newspapers and digital publishers is that 'we want a subscription product -- we want to be able to see a paywall in Facebook,'" Brown said at the conference, according to the report. "And that is something we're doing now. We are launching a subscription product." 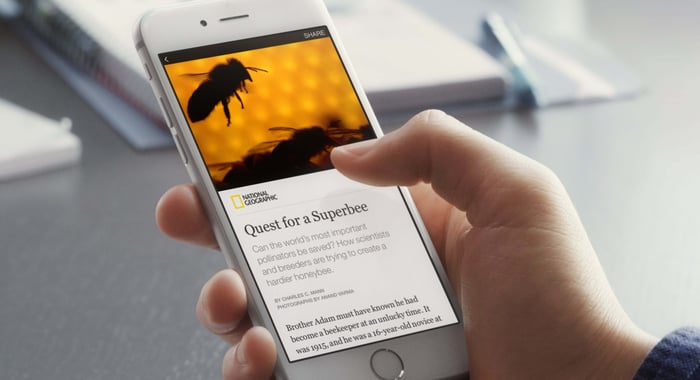 The paywall would be part of Instant Articles, which many publishers have complained about due to poor monetization. The news comes a month after The Wall Street Journal reported that Facebook was considering subscription products for publishers, potentially allowing users to sign up directly within its mobile app. Brown declined to elaborate on whether or not Facebook would collect a cut of any subscriptions it helps sell.

Shares are up on the news, so it appears that investors are optimistic about the possibility that Facebook will get a cut. After all, if Facebook can help publishers grow their businesses through its platform, it deserves a piece of the action. Facebook does share ad revenue from certain ads in Instant Articles, such as those from Facebook's Audience Network; publishers keep 100% of ad revenue from ads that they directly sell themselves.

For better or worse, Facebook has become a massively important distribution channel for publishers. Facebook and publishers can create a mutually beneficial relationship where each party can enjoy the financial upside.

Meanwhile, Apple (NASDAQ:AAPL) is now getting more serious about Apple News, its own news distribution platform. Apple has always sold subscriptions through News, and its recent focus is on improving ad monetization by supporting more ad formats. We do know that the Mac maker now has 165 million active subscriptions through its various content stores, but it's unclear how many of those are for publishers. It's very likely that many of those subscriptions are concentrated in video services.

Apple also revamped its revenue sharing model last year: After the first year of collecting its typical 30%, Apple's share subsequently drops to 15%. That encourages publishers and developers to foster long-term relationships with customers, with the goal of getting to the threshold of keeping 85% of subscription. This could approximate what Facebook investors might be able to expect, depending on how aggressive Facebook wants to be.

There would also be the potential benefit of diversification. Facebook's business has long been dominated by advertising, with the stagnant payments segment continuing to decline in terms of its top-line contribution. Even though it would take a while for a subscription product to become a meaningful revenue generator, diversifying with recurring revenue sources is never a bad thing.