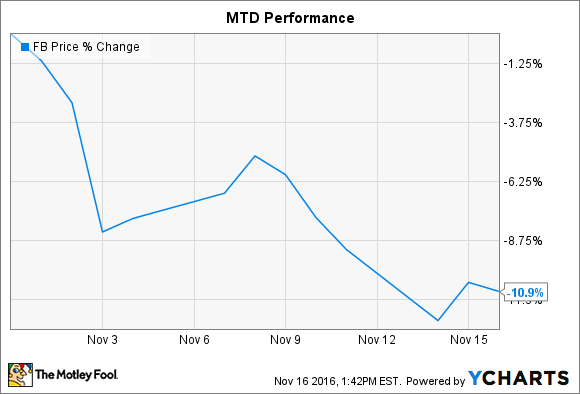 And it's only half over.

The premier social network has had a rough November so far. It all started when Facebook (NASDAQ:FB) reported third-quarter earnings. While the results themselves were solid all around, with both top- and bottom-line results easily beating analyst expectations, investors were rattled by management's remarks that revenue growth may slow in 2017 and it would be investing heavily in the business -- squeezing profitability in more ways than one. The whole episode was eerily similar to an earnings release two years prior, and it's possible that November 2016 will prove in hindsight to have been a great entry point.

Things only got worse from there, following Donald Trump's surprise win of the U.S. presidential election. More than ever, social media is being attributed with having a powerful influence on what people read, think, and feel. Facebook has become a massive distribution platform for content, a responsibility that it arguably needs to take more seriously. Within the context of the election, there have been criticisms of fake news being widely distributed, such as a headline that the Pope endorsed Donald Trump, among others. It's unclear whether or not these false storylines shaped voter perceptions. The potential is absolutely there since Facebook's News Feed algorithms, which determine what a large swath of the world sees on a regular basis, have incredible power to affect public perception on a number of broader topics beyond what people had for lunch.

The latest negative storyline to hit Zuck & Co. is really more of a continuation of something that started in September. Two months ago, Facebook acknowledged to video advertisers, who are among its most valuable customers, that it had been inadvertently overestimating how long users were spending watching video ads, effectively inflating the average by 60% to 80% since it was excluding viewers that bailed within the first 3 seconds. Facebook now says that it has uncovered additional shortfalls with some of its metrics and reporting, including organic reach, time spent on Instant Articles, and app referrals. The company is vowing to improve reporting across all of its products, including with additional third-party verification and other measures.

The glass is half full

The good news is that none of these negative storylines will be lasting if Facebook can act quickly to address the underlying concerns and criticisms (at least for the latter two instances).

Ongoing investment next year is absolutely the right call to strengthen the business over the long term, particularly with the ongoing focus on video and live-streaming that require significant backend infrastructure to handle the bandwidth. Facebook has already started to crack down on fake news, with some employees unofficially forming a task force to combat the problem. Mark Zuckerberg has been relatively dismissive about the fake news allegations, saying it was "a pretty crazy idea" that Facebook could potentially sway an election. That's a dangerously complacent mentality, but I trust that Zuck will come around in short order and take responsibility for the broader power that Facebook wields.

Improving metrics and reporting is a necessary growing pain. While advertising customers may be a little annoyed that they've been operating on inaccurate data, they should be relieved that Facebook is actively trying to improve its analytics since those businesses rely heavily on that data.

With shares off 10% month to date and these issues likely to be little more than short-term speed bumps, long-term investors can safely ignore the pessimism.

Facebook, Inc. Has Had a Terrible Month @themotleyfool #stocks $FB Next Article
Current