The iPhone was not supposed to matter as much this quarter. But of course, it's Apple (AAPL -1.93%), so the iPhone inevitably dominates investor sentiment. That's in part why shares dipped after the Mac maker reported earnings last night.

Revenue in the fiscal second quarter totaled $52.9 billion, with earnings per share of $2.10. The company sold 50.8 million iPhones, 8.9 million iPads, and 4.2 million Macs. Consensus estimates had called for a hair over $53 billion in sales, $2.02 per share in profit, and 52 million iPhones. 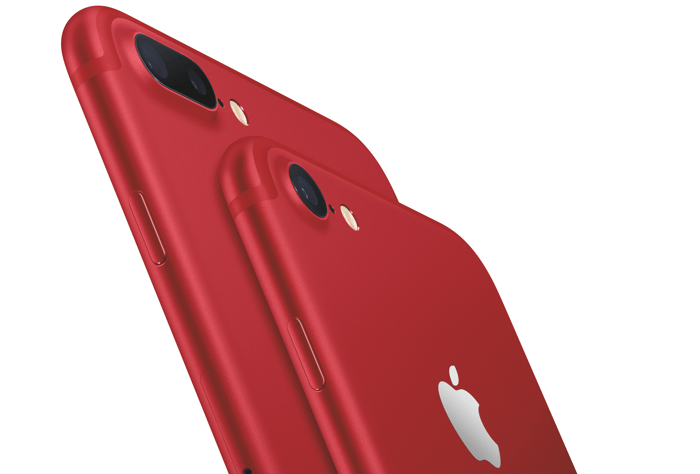 Instead, what investors should have focused on was continued progress growing the services business, and the annual update to Apple's capital return program. The company delivered on both of those fronts.

Services revenue jumped 18% to $7 billion, again making it Apple's second-largest revenue stream behind the iPhone. That's not the first time that's happened -- services revenue exceeded Mac revenue in four of the past six quarters -- but investors should start getting used to it. Furthermore, investors should be giving the services business more weight than it seems they currently are, considering how quickly it's growing and how profitable it is. 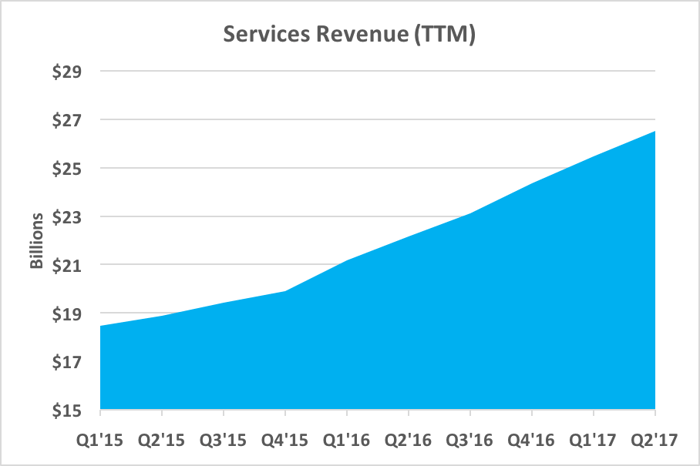 One analyst posed a strategic question regarding services. Given the higher-margin profile of services, would it make sense for Apple to offer lower hardware prices in order to grow unit sales and the services installed base, effectively subsidizing hardware with services profits? That's a key pillar of my case for Apple and space internet, after all. CEO Tim Cook shot down that idea, saying Apple prices both hardware and software at a level where it believes it can provide good value, and does not consider taking profits from one business to subsidize another.

Speaking of services and profitability

When Apple issued guidance a few months back, it predicted a rare sequential uptick in gross margin, despite the loss of operating leverage coming out of the holiday quarter. There have been price increases in the memory markets for both NAND and DRAM, along with ongoing foreign exchange headwinds. That makes margin expansion tough, but Apple pulled it off: Gross margin expanded by 42 basis points sequentially to approximately 38.9%, near the high end of guidance.

How did the company do it? You guessed it: services. Maestri said that the shift toward higher-margin services was instrumental in overcoming those headwinds, more than offsetting the cost pressures.

As expected, Apple updated its capital return program, once again prioritizing share repurchases. The iPhone maker is boosting the program by $50 billion, of which $35 billion is being allocated to the share repurchase authorization. That total authorization will rise from the current $175 billion to $210 billion. Apple is also extending the timeline for the capital return program through March 2019, but that timeline is insignificant because we'll get another update in another year's time. The company is boosting its quarterly dividend by 10.5% to $0.63 per share, which will be payable to shareholders of record as of May 15. 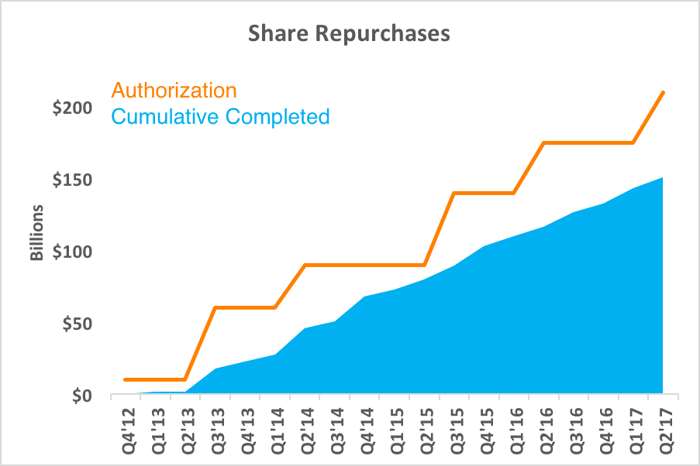 Apple bought back $7 billion worth of stock during the quarter, consisting of $4 billion in open market purchases and a $3 billion accelerated share repurchase (ASR) program, Apple's 10th ASR program in five years. Having now repurchased roughly $151 billion in stock to date, that leaves the company with nearly $60 billion worth of authorization to work through over the next year until the next update.

For reference, an increase of $35 billion in repurchase authorization is in line with Apple's history.

If anything, that bump could be considered conservative. Apple now has $256.8 billion in total cash -- over a quarter of a trillion dollars -- sitting on its balance sheet, a sequential increase from last quarter. After factoring in the $10 billion bond offering in February that brought Apple's total debt (including commercial paper) to nearly $100 billion, net cash did decline modestly on a sequential basis to $168.3 billion.

The company continues to generate cash faster than it can return it to shareholders, and the possibility of some sort of repatriation holiday is more probable than it has been in years. Maestri said that the program reflects the current tax environment, so it's conceivable that if a repatriation holiday does materialize, Apple may change its tune, given over 93% of cash still sits abroad.

Fight with Qualcomm a "principled stand"

Unlike Qualcomm's (QCOM -2.33%) earnings call, which was dominated by discussion of Apple's legal complaint, there was limited talk of the dispute with Qualcomm. Apple is still accruing liabilities associated with royalties to Qualcomm, and as such its recent decision to withhold royalty payments does not provide any benefit to costs; it's just a matter of cash flow.

Cook framed the decision like this: You don't pay someone if there's a disagreement over how much you owe. Once the courts decide an appropriate amount, or the companies settle, Apple will pay. Cook reiterated Apple's stance that charging a percentage-based royalty is inappropriate since Qualcomm effectively gets to make more money when Apple innovates a new feature and increases iPhone price. Consider the $20 price bump that the iPhone 7 Plus got last year to cover the cost of the dual-camera system, which Qualcomm had nothing to do with. It's a "principled stand," according to Cook.

Guidance for the June quarter calls for revenue in the range of $43.5 billion to $45.5 billion, with gross margin of 37.5% to 38.5%. That top-line outlook is a hair shy of the $45.6 billion that analysts are currently modeling for. Apple will also be hosting WWDC in June, which promises to bring a slew of announcements around software and services, and maybe even that rumored Siri speaker.