The more I think about it, the more it makes sense.

There are some pretty compelling indications that Apple (AAPL 0.17%) is interested in space internet, given the company's recent hiring of spacecraft and satellite experts. While Apple could be up to something else, building a constellation of satellites to beam gigabit internet to Earth could make sense on so many levels. Let's look at this potential moonshot from every angle, and by the end I think you'll agree with me: Apple should do it.

There are old stories about how Steve Jobs had envisioned Apple creating a cell network for the iPhone, vertically integrating into that part of the value chain. Apple originally thought of building a network on unlicensed spectrum bands (like the ones that Wi-Fi currently operate in). While removing dependence on carriers sounds appealing on a strategic level, the idea didn't make it that far, probably since building a network is massively expensive; the largest U.S. carriers spend $20 billion per year in capital expenditures.

Separately, there had been more recent rumors of Apple creating a mobile virtual network operator (MVNO), buying wholesale capacity from the carriers and reselling it under its own brand. CEO Tim Cook promptly squashed that scuttlebutt in 2016, but there should be little doubt that Apple considered the idea.

Why Apple keeps thinking about networks

At the same time, you may have noticed that depending on third-party carriers has become a liability for Apple in some markets, particularly emerging ones. LTE coverage is quite poor in many parts of the world, which severely compromises the value proposition of mobile devices. For example, Cook has cited poor LTE penetration as one of Apple's key hurdles in India, but India isn't alone in this regard.

Creating a space internet network has the potential to free Apple from third-party network road maps, directly bringing high-speed connectivity to every corner of the Earth. Importantly, this would allow Apple to sell an iPhone to anyone, anywhere.

Satellite phones have been around for decades, but have historically been relegated to military and industrial uses due to the high costs. Regular cellphones are perfectly sufficient for the average consumer. But Apple has a long history of democratizing high-end technologies and bringing those technologies to the mainstream.

We already know that SpaceX is planning its own space internet network, which could launch as early as 2019. Thanks to documents leaked to The Wall Street Journal earlier this year, we also know the company's financial forecasts. SpaceX estimates that it could generate $30 billion in revenue in 2025 from delivering space internet service to 40 million subscribers. If we use those figures, that translates into about $750 per subscriber per year -- more than the average price of an iPhone ($695 in the fourth quarter). At $62.50 per month, that's just slightly higher than what consumers currently pay for cell service. 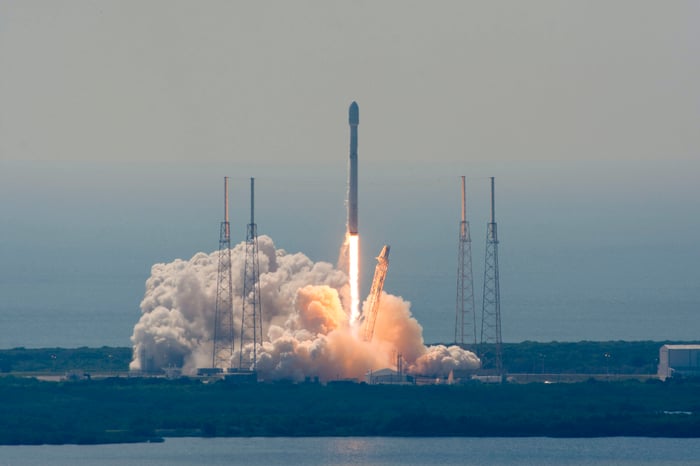 Another challenge for Apple in emerging markets has been the premium pricing of the iPhone. Imagine if Apple were to bundle iPhones with integrated service beamed down from the stars. Knowing that it could collect recurring revenue, Apple could justify lowering the upfront cost of the device itself in order to spur unit sales. On top of that, the company could improve its already high user retention, and still count on hardware upgrades at regular intervals. Let's call it iPhone-and-Space-Internet-as-a-Service (iPSIaaS). (Kidding.)

This is all in line with Apple's growing services ambitions, and I think we can all agree that space internet is the ultimate service.

Of course, we have to consider the cost to build and deploy such a network. Facebook had tapped SpaceX to launch an internet satellite to bring connectivity to rural Africa last year, but the rocket unfortunately exploded on the launch pad. It was a $200 million satellite intended for geostationary orbit, hovering above the Earth with an orbital velocity matching the Earth's rotation so that it would appear fixed to terrestrial observers. That would allow the internet satellite to provide continuous coverage for a designated geographical region.

Apple could surgically launch internet satellites in regions that have the most strategic value -- namely, emerging markets where cellular network infrastructure is immature. Over time, perhaps Apple could expand to developed markets, threatening carriers in the process, but there would be much less need to start there.

Each SpaceX launch costs a little over $60 million, a dramatic reduction from traditional launch costs, and that's before factoring in any discounts for customers that agree to launch on a reused rocket. For Apple, those costs are quite reasonable given how much a space internet initiative would make sense. Go for it, Tim.