Sadly, we're not talking about an Apple Rocket.

Investors already know that Apple (AAPL 1.30%) is actively searching for its next big hit, be it autonomous electric cars, augmented reality, or a toaster-refrigerator. There's now a clue of another possible idea floating around Cupertino: space internet.

Bloomberg reported on Friday that Apple has poached two high-level Alphabet executives that worked on satellite and spacecraft projects for Google, John Fenwick and Michael Trela. Trela served as Google's head of satellite engineering from August 2014 to March 2017, according to his LinkedIn profile. Fenwick was Google's head of spacecraft operations over the same time frame, according to his LinkedIn profile. Neither executive's profile has been updated to mention Apple.

Apple may have "potential interest in space"

The report notes that aerospace giant Boeing (BA -0.18%) has expressed interest in pursuing space internet with a network of 1,000 satellites, saying that Boeing has held talks with Apple as a potential investor and partner. Apple may in fact be helping fund the project, according to Bloomberg, citing a blog post from satellite and telecom consultant Tim Farrar, but Apple's involvement beyond that is unclear.

Farrar wrote last month, "Boeing has also indicated to these people that it does not need export credit funding for the project, which supports the idea that this project is backed by a deep pocketed US entity." After ruling out other tech giants that have expressed extraterrestrial interest, Farrar concludes, "That only leaves Apple as never having discussed publicly its potential interest in space."

Apple does have the deepest pockets of any company on Earth, after all.

This all comes a few months after The Wall Street Journal got ahold of leaked financials for Elon Musk's SpaceX, which is privately held. Of course, SpaceX's primary mission is to achieve full and rapid reusability of rockets in order to realize massive reductions in the cost of space travel, which the company hopes will pave the way for subsequent colonization of Mars.

The business is currently built on launch contracts, but the internal information that was obtained shows that SpaceX has lofty ambitions for creating a satellite internet business within a matter of years, potentially starting as early as 2019. 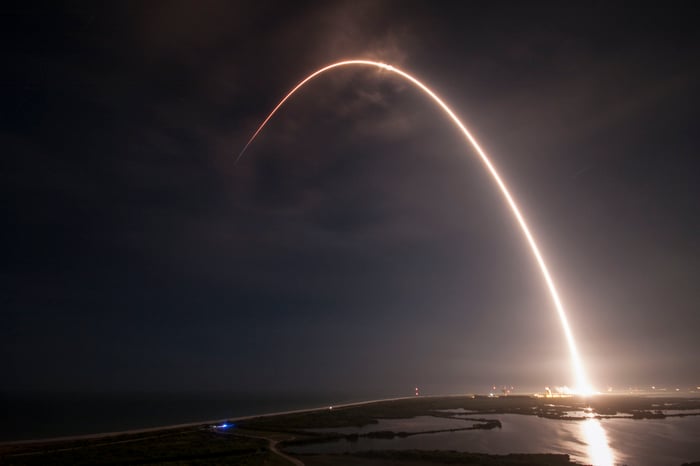 SpaceX's projections estimate that the service could garner 40 million subscribers and generate over $30 billion in revenue by 2025, according to the report. In contrast, the launch business is only expected to bring in $5 billion in sales that year, meaning that SpaceX believes that there's much more financial opportunity in beaming space internet down to Earth than launching reusable rockets. Operating income is forecast between $20 billion and $25 billion in 2025, which would largely be driven by the new business.

The company had previously disclosed plans to launch over 4,400 satellites into low-Earth orbit to deliver low-latency internet from space, but had not mentioned financial expectations.

Apple has been wanting to grow services revenue

People have been dreaming of space internet for over a decade, and there have been many casualties over the years. But as things tend to go in technology, things change rapidly over time, and that rate of change only accelerates. Falling costs have opened up the potential for a new wave of space entrepreneurs; start-up OneWeb raised $1.2 billion last year to build and launch a space internet network.

It's entirely possible that Apple has something else in mind, but given the company's heavy emphasis on services in recent quarters, it seems conceivable that Apple sees potential in building a strong base of recurring revenue from a literal moonshot like space internet. However, even if you accept SpaceX's forecast, $30 billion still isn't a game changer on Apple's income statement, although it would be a welcome addition to the services segment (currently a $25 billion business).

There would immense costs associated with building such a constellation, but the Mac maker is currently sitting on the most cash that it's ever had ($246 billion at last count, before factoring in debt). Space internet revenue also wouldn't have as high of margins compared to Apple's terrestrial services, given these costs.

Still, I'm hoping that Apple one day announces "the most extraterrestrial service we've ever made."