Anything can be forced to converge. But the problem is that the products are about trade-offs; you begin to make trade-offs to the point that what you have left at the end of the day doesn't please anyone. You can converge a toaster and a refrigerator, but you know those things are probably not going to be pleasing to the user. -- Tim Cook, April 2012

In a recent interview with The Australian Financial Review, Microsoft (NASDAQ:MSFT) CEO Satya Nadella referenced his rival's remarks, pointing to Surface's success as evidence for the two-in-one market's viability:

I mean, take even Surface. Three years ago, the two-in-one as a form factor was questioned. Does anybody need one? And now, guess what, even our competition has decided that it's not a refrigerator and a toaster, but it's actually a two-in-one.

It's true that Microsoft's Surface business has been growing, although the Surface business is a bit bumpy, and growth is decelerating meaningfully already. Microsoft doesn't directly disclose Surface revenue but instead provides data on growth, which allows you to back into the actual figures. 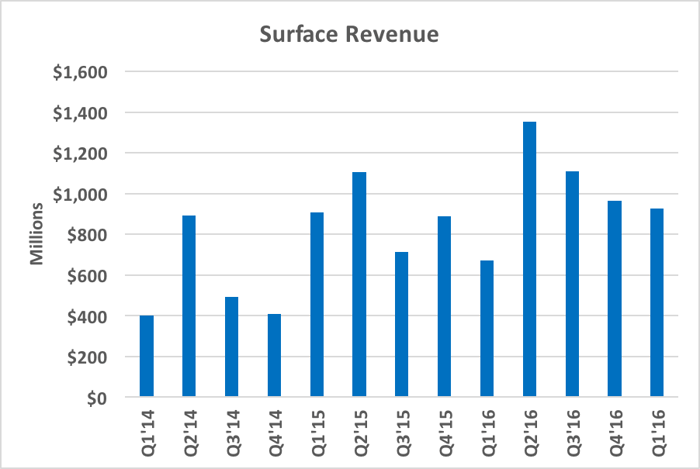 It goes without saying that Microsoft is a pretty tiny player in the grand scheme of the global PC market when it comes to hardware, and the company does not disclose unit volumes. Broadly, detachable tablets comprise about 16% of the market, according to IDC, but this figure should continue to rise as the market shifts to more productivity-oriented use cases.

Apple's new MacBook Pro with Touch Bar represents something of a compromise on Apple's part. The Mac maker is standing pat with its position that vertically oriented touchscreens are the wrong way to go, both because of the ergonomic considerations as well as the fact that interface elements need to be dramatically different sizes for pointer-input compared to touch-input.

But the introduction of the Touch Bar does suggest that Apple still wants to do more with its Multi-Touch technology beyond the trackpad and iOS devices, at least within the confines of its philosophical choice. The challenge is that Apple doesn't have much flexibility with catching up if the toaster-refrigerator market starts to boom, unless it has been holding back a touch-optimized version of macOS as a hedge that it can deploy quickly.

While the iPad Pro with Smart Keyboard technically qualifies as a detachable tablet (at least by IDC's category definitions), it's not quite a full two-in-one. Maybe Cook should have taken the toaster-refrigerator market a little bit more seriously. At least Cook isn't taking the flying-floating car market for granted.