Please ensure Javascript is enabled for purposes of website accessibility
Log In Help Join The Motley Fool
Free Article Join Over 1 Million Premium Members And Get More In-Depth Stock Guidance and Research
By Evan Niu, CFA - Oct 26, 2012 at 11:31AM

Don't fall off the wagon.

Three out of five.

That's how many times Apple (AAPL -2.98%) has "missed" estimates one way or another out of the five past quarters. The iPhone maker just put up fiscal fourth quarter and full-year results that fell short of most expectations, including the bottom line. This is a bad habit in the making. Is there something deeper at work that investors should be afraid of?

Revenue was just shy of $36 billion, which resulted in net income of $8.2 billion, or $8.67 per share. Those were the headline figures, but let's dig in deeper to the iDigits.

Least, but not last
The figure that jumped out to me was iPad unit sales. They came in at 14 million, well below what analysts were looking for and a sequential drop of 3 million units. This was somewhat expected, as Tim Cook recently said Apple had sold its 100 millionth iPad after the quarter closed, meaning it had to have sold less than 15.9 million units last quarter. While technically a "miss" here, there are some important considerations to remember. 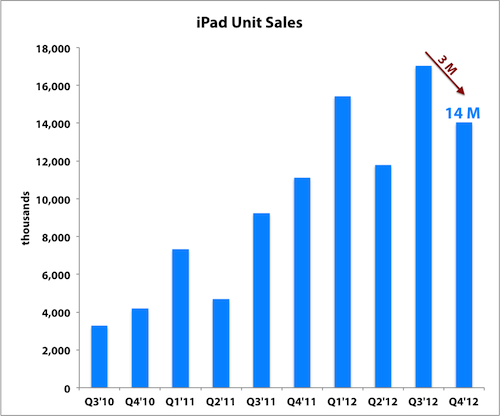 First off, Apple recognizes sales upon sell-in to the channel, not sell-through to end customers. That means the 17 million in iPad unit sales that Apple posted last quarter looked high because Apple was filling the channel coming off of the launch of the third-generation iPad. Specifically, we're talking about a 1.2 million unit increase in channel inventory in the June quarter.

On top of that, the rumor mill struck again and some prospective iPad buyers held off in anticipation of the iPad mini announcement. Even for consumers set on buying an iPad, it's reasonable to expect a portion of those would prefer the smaller form factor and it was all but a certainty the iPad mini was on its way. Cook added, "Some of that was anticipated and some of it I wish wouldn't occur, but it did occur."

Sell-through was actually up 44% over last year, higher than the 26% increase reported in sell-in. Ultimately, 14 million iPads may seem a little light, but it's hard to complain about selling 31 million units over the past two quarters. That's almost a third of all iPads that Apple has ever sold -- in two quarters.

Let's talk iPhone
On the bright side, iPhone units were solid, especially given the supply constraints currently afflicting the iPhone 5, which was only on sale for 9 days during the quarter. The 26.9 million iPhones sold were a sequential gain of about 900,000 units, a healthy indication that older models continue to sell well. This fiscal year, Apple sold 125 million iPhones, up from 72.3 million last year. 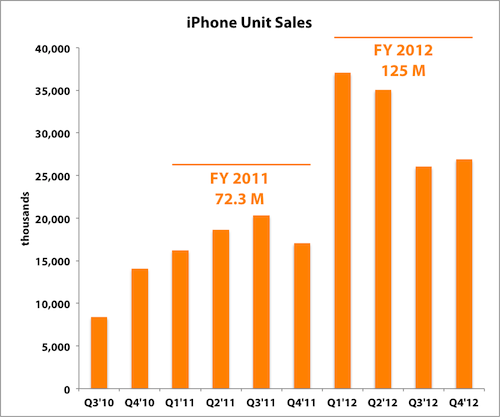 Of fourth-quarter units, we know that at least 5 million were iPhone 5 units, but these remain supply constrained even now. That's more of a concern for the current quarter, since we're now nearly a third of the way through and Apple still has unmet demand. Cook feels "great" about current iPhone 5 output levels, as they've increased significantly throughout October, but stopped short of saying when supply and demand may balance.

He also expects the iPhone 5 to launch in Mainland China this quarter. Of course, Cook didn't drop any clues on the China Mobile (CHL) partnership that everyone is waiting on, but he's dropped enough clues this week.

The Middle Kingdom
Greater China saw revenue of $5.7 billion last quarter, flat sequentially but up 26% year over year. Macs were up 44%, iPads jumped 45%, and iPhones increased 38% in the region. For the full year, Greater China revenue was a whopping $23.8 billion. 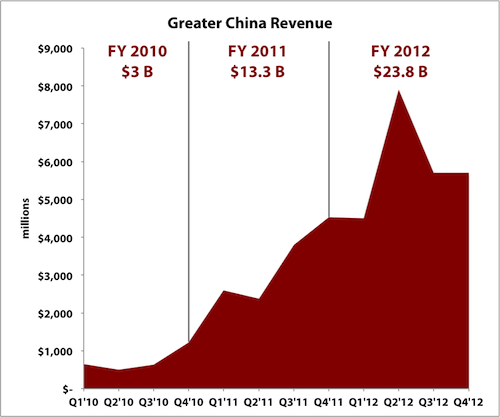 That's up 78% from $13.3 billion a year ago, and represented an incredible 15% of Apple's revenue for the fiscal year. It's a good thing more Apple retail stores are coming in China, because it's only just begun.

Missed opportunity?
When asked about Microsoft (MSFT -3.17%) Windows 8 and Surface, Cook's been "reading" that it's a compromising and confusing device. He's probably read all of these reviews, because that seems to be a common theme. He stands by the notion that hybrid and convertible devices have too many inherent trade-offs.

In Cook's trademark deadpan humor, he said, "I suppose you could design a car that that flies and floats, but I don't think it would do all of those things very well." Echoing his toaster-fridge comment in April, it seems Cook just doesn't realize how big the combined toaster-fridge and hover car markets are, and how they're ripe for disruption. Forget the Apple TV set -- I'd buy an iHoverCar.

Still, he's not too worried about Windows 8. Besides, iPad mini and fourth-generation iPad pre-orders start today -- the same day Microsoft is launching Windows 8 and Surface RT.

'Tis the season for an Apple blowout
Even if Apple sees some weakness over this "miss," I see it as a buying opportunity. The company now has $121.3 billion in cash on the books -- over a fifth of its market cap. With the results, it now trades under 14 times earnings (under 11 times earnings excluding cash), and just grew net income by 61% this fiscal year.

The holiday quarter is going to be a monster. Apple's product lineup heading into the shopping season is absurdly strong. In fact, CFO Peter Oppenheimer believes that 80% of revenue will come from products launched within the past six weeks. That would include the iPhone 5, iPad mini, fourth-generation iPad, the new iPods, iMacs, Mac minis, and 13-inch MacBook Pro with Retina display.

Have no doubt: next quarter will shatter records in more ways than one.