Please ensure Javascript is enabled for purposes of website accessibility
Log In Help Join The Motley Fool
Free Article Join Over 1 Million Premium Members And Get More In-Depth Stock Guidance and Research
By Matthew DiLallo - Oct 19, 2017 at 11:37AM

The diversified driller is diluting investors.

Shares of Earthstone Energy (ESTE -8.57%) slumped on Thursday, falling 14% as of 11:28 a.m. EDT, following an operations update and the announcement of a dilutive equity offering.

Last night Earthstone Energy reported that its estimated production for the third quarter averaged 9,671 barrels of oil equivalent per day (BOE/D). That's less than the company expected because it had to shut-in three wells for 44 days while it completed some offset wells, which resulted in the temporary loss of 425 BOE/D. In addition to that, Hurricane Harvey forced the company to shut-in some production and stop flaring gas, resulting in another 64 BOE/D in lost output. As a result of these issues and the sale of some non-core assets, Earthstone Energy expects its 2017 production exit rate to be 500 BOE/D below its initial estimate. 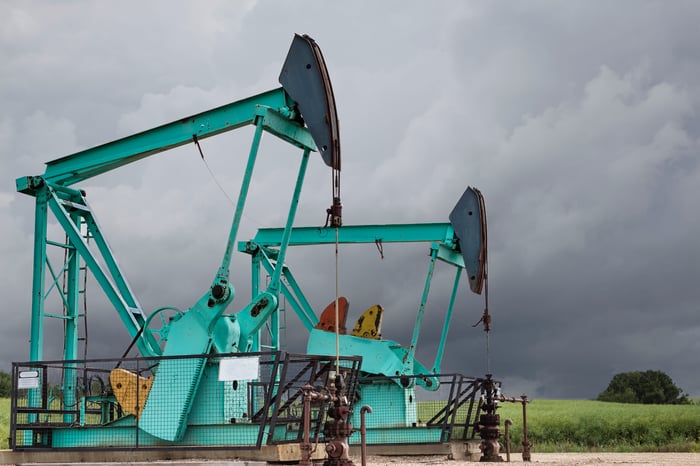 Because of its small size, these issues had a greater impact on Earthstone than they would have on a larger rival. For example, shale giant Pioneer Natural Resources (PXD -1.37%) noted that Hurricane Harvey and some other issues negatively impacted output by 3,500 BOE/D in the third quarter. However, due to the size of its production base, it was still within the guidance range for the quarter, so Pioneer Natural Resources didn't need to adjust its full-year outlook.

In addition to the lackluster production report, Earthstone Energy also announced an equity offering. The company priced 4.5 million shares at $9.25 apiece, which was well below the $11 per share where the stock had been trading yesterday afternoon. In addition to that deep discount, the offering represents nearly 20% dilution for existing shareholders. That said, the offering did raise $39.2 million, which will allow the company to pay down a significant portion of the borrowings under its credit facility.

Earthstone Energy is a high-risk oil stock due to its small size. While it does control acreage across several shale plays, including in the high-growth Permian with Pioneer, it lacks the scale and financial resources of its larger rivals, which can thrive in the current operating environment. Investors should consider one of those top-tier competitors instead, rather than taking on the additional risks associated with Earthstone, especially since it likely will need to continue diluting investors to get its scale where it needs to be so it can compete on their level.