Rogers Communications' (NYSE:RCI) wireless division was once again the star of its quarterly results. Revenue in the segment jumped 5% while adjusted operating profit rose 9%, due in part to achieving the best subscriber metrics in eight years. That strong showing, when combined with the Canadian telecom giant's solid performance earlier this year, led the company to boost its full-year guidance.

Note: All figures in Canadian dollars. 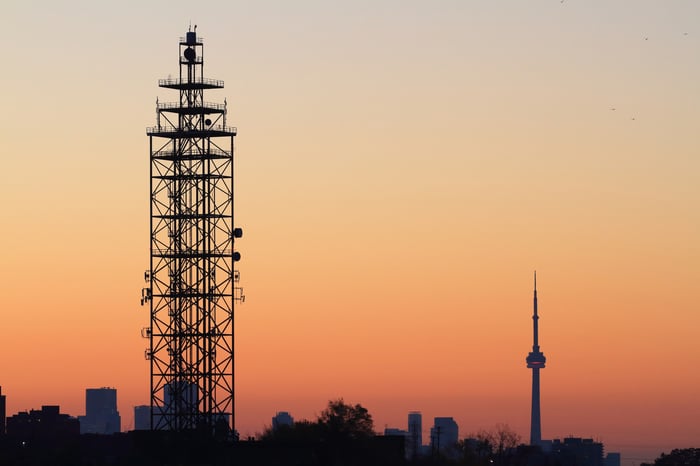 Our third quarter results reflect continued momentum with strong top-line growth and flow-through to adjusted operating profit. Our team delivered on all key operating and financial metrics in our largest segment, Wireless. We significantly grew subscribers, revenue, adjusted operating profit, and margins. We are pleased with our postpaid churn result. In a highly competitive quarter, Cable financials were strong thanks to our Internet competitive speed advantage. We continue to focus our efforts to drive customer service and margin improvements.

The continued improvement in the wireless customer churn rate, which are customers who dropped service, is worth noting. That's exactly what Rogers expected when it brought Natale on board since his former employer, Telus, routinely had the lowest churn rate in the industry. He has already started transferring what worked at Telus to quickly drop Rogers' churn rate, which is having a noticeable impact on profitability.

Because of that positive impact, Rogers expects adjusted operating profit to rise 5% to 6% this year, which is an improvement from the previous guidance that it would increase 2% to 4%. However, the company plans to reinvest that incremental profit to further improve the quality of its networks by boosting capital expenditures. As a result, free cash flow guidance remains unchanged, with the company anticipating that it will rise 2% to 4%, which will cover the dividend with plenty of room to spare.