One of these names could be a hot but short-lived phenom; the other is sure to stick around for decades to come. Invest accordingly.

It's true that both Texas Instruments (TXN 4.32%) and NVIDIA (NVDA 8.24%) work in the semiconductor industry. The two companies design computer chips, and each is a household name in its chosen focus markets.

The similarities stop right there. NVIDIA has very little in common with TI, and investors need to think about these companies as two fundamentally different investments. Which one would be the better fit for your portfolio? Let's find out.

In the red corner, you'll find Texas Instruments. What started out as an oil company in 1930 evolved into a semiconductor designer in the 1970s. TI runs a hybrid manufacturing model with a mix of in-house production lines and third-party foundries. The product portfolio focuses on analog and embedded processors, helping computers interact with their physical environment, and with humans in particular.

In the green corner, there's NVIDIA. Founded in 1993 and launching its first product two years later, the company originally focused on the then-emerging market for computer graphics processors. NVIDIA is still in the graphics game, but its processors are also finding new homes in heavy-duty computing tasks such as artificial intelligence, deep learning, cryptocurrency mining, and automotive computing. This company never built any factories of its own, but depends exclusively on foundries for its chip manufacturing needs.

If NVIDIA makes the main processor for your next car's infotainment and control systems, TI will provide the sensors and power management chips that help the whole system function. So they explore the same markets every so often, but from very different angles.

The table above looked very different just a couple of years ago. In 2016, NVIDIA launched its Pascal chip architecture to wide acclaim. All at once, that platform sparked a massive surge in revenues, profits, and share price gains. The GeForce 10 series of graphics processors can be found in cryptocurrency mining rigs and video gaming systems around the world, while the Tesla lineup of Pascal-based enterprise chips has made inroads into the data center. TI's growth has been more stable and less dramatic over the same period. See these hockey-stick charts for further detail: 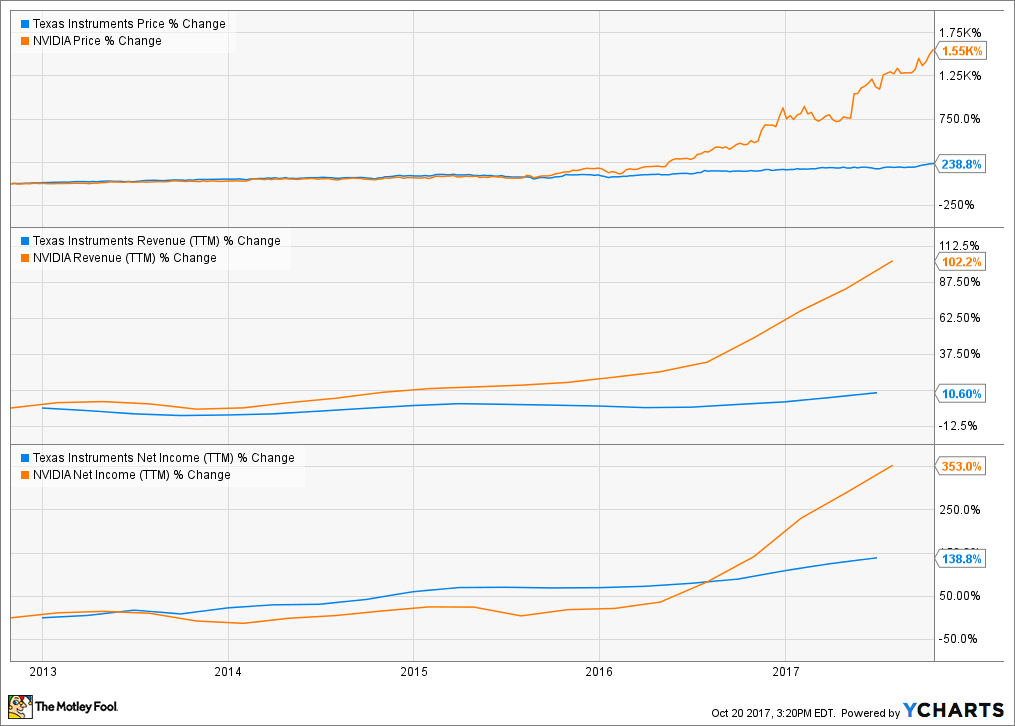 Investors have come to expect massive growth out of NVIDIA's financial reports. Shares are trading at 66 times free cash flows and 56 times trailing earnings today; both of these ratios have tripled or more in the last three years.

TI is much farther removed from the market's nosebleed section, as shares trade for 23 times trailing earnings and 24 times free cash flows.

Both companies have a tendency to meet or beat Wall Street's earnings and revenue targets, quarter by quarter. NVIDIA's upside surprises are often larger than TI's, triggering bigger share price jumps along the way.

NVIDIA could work for you, as long as you're willing to accept a large amount of market risk. The stock is trading at sky-high valuations, and a small speed bump along the way could easily trigger a large correction. The company can beat the Street across the board and still see share prices sliding 7% lower on the news. NVIDIA also needs to stay ahead of expectations with a steady stream of winning products and innovations. Anything less is a ticket right back to bargain-basement valuation multiples.

If NVIDIA lives and dies by a handful of crown-jewel products, TI ships thousands of different chips to more than 100,000 customers. The company serves six end-user markets, further divided into 35 smaller subsectors. This diversity protects TI and its investors from sudden market shifts. Furthermore, TI is a mature enough business to offer a strong dividend policy. Backed by prodigious and stable cash flows, TI's dividend has seen annual increases without interruption since 2004. Payouts have increased more than sixfold over the last decade, including Friday's 24% bump.