Whenever two giant companies come together, you have to assume there are going to be some early headaches as the newly combined entity goes through the initial restructuring and builds a coherent long-term strategy. That seems to have been the case with Baker Hughes, a GE Company's (NYSE:BKR) most recent quarterly results. (Side note: We're calling it BHGE from here on out, and if by chance a company exec is reading this, please change the name.)

Let's take a look a BHGE's most recent results, how much all the corporate changes cost the company, and what investors in this intriguing oil services and equipment giant should be thinking as the company comes into its own. 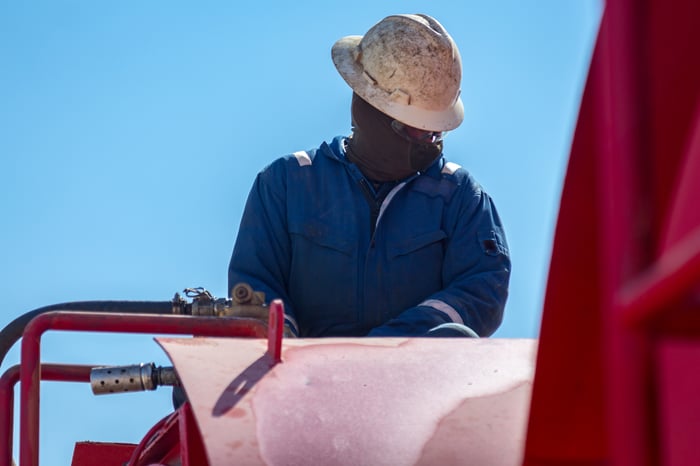 BHGE's result for the third quarter doesn't look great, especially when compared to other oilfield services companies. Schlumberger's (NYSE:SLB) most recent quarter benefited immensely from robust growth in North America and some mixed results internationally. To be fair to BHGE, though, this quarter included approximately $350 million in charges for impairments and restructuring. It was inevitable that a company this size, and from relatively disparate parts of the oil services industry, was going to have to work out a few kinks. So those results can be somewhat forgiven.

On the brighter side, the company did note that orders for all four of its business segments were up compared to this time last year. The largest of those gains coming from oilfield equipment and digital solutions. That's encouraging, since those two segments were the ones that saw revenue decline year over year. Because of the way the BHGE reports its results, it's much harder to discern how these results broke down along geographic lines. Management noted that its oilfield services business reported a 5% gain in North American revenue and a 3% gain internationally.

Perhaps the most notable news of the quarter were some of the large orders it received. The company was awarded two separate equipment contracts related to Eni's and ExxonMobil's Coral South floating-LNG project off the coast of Mozambique. It also received two large subsea equipment orders for deepwater projects in Papua New Guinea and Egypt. Also, not to be outdone, its digital solutions business netted a $300 million asset performance management contract using parent company General Electric's Predix platform.

Based on CEO Lorenzo Simonelli's statement on the quarter, it was clear that he and his management team are focused on the integration and restructuring of these two businesses. As far as his outlook for the industry, in general, Simonelli's statement was a bit more pessimistic than what we have been hearing from other oil and gas executives lately.

We expect the overall oil and gas environment to remain challenging for the rest of the year. We have seen some improvement in activity but we have not seen meaningful increases in customer capital commitments. Oil prices remain volatile and, as a result, our customers remain cautious. We continue to support our customers through innovative solutions and solid execution and are focused on integrating and driving the best of both legacy businesses.

Considering that it has been less than a quarter since the consolidation, I think it's fair to say management gets a pass until it completes its restructuring plan. After all, the company's results without writedowns and restructuring costs look halfway decent, and the company has a net cash position that gives it a lot of options to deploy capital. It may take a while until we see the full strength of this company, but BHGE is worth watching closely in the upcoming quarters.