The NBA Experience will open two summers from now, giving the media giant another place in Disney World where it can try to promote sports programming.

Walt Disney (DIS 1.84%) is turning to big hoops to breathe new life to its Disney Springs shopping complex in Florida. The media giant unveiled concept art for The NBA Experience, a multi-level building that will house interactive games, immersive experiences, a restaurant, and an NBA store.

Disney announced that it would be adding an NBA-themed venue to its rapidly evolving Disney World shopping and entertainment hub in the summer of 2015. It wasn't until this summer that Disney shuttered DisneyQuest, the five-story arcade where The NBA Experience will open in the summer of 2019. It began demolishing DisneyQuest this week, so updated concept art is one way to ease the pain over the latest constructive eyesore at the House of Mouse.

Disney doesn't own the NBA. It also doesn't own a team, or have licensing rights to an arena. However, it airs plenty of pro basketball games on its ESPN and ABC subsidiaries. With ESPN and, to a lesser extent, ABC coming under fire for their shrinking audiences, you can't blame Disney for building out an arena-like venue that will hopefully drum up demand for basketball and live sports, in general. 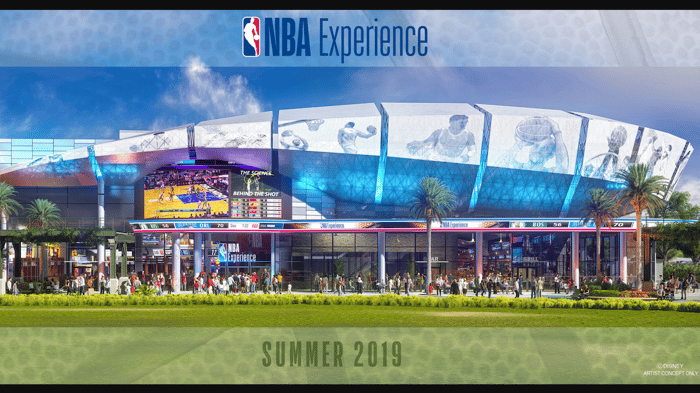 Disney's majority-owned ESPN is in trouble. More than 100 million U.S. homes subscribed to the leading sports network at its 2011 peak, and audiences have gone on to decline every year since then. ESPN now is down to roughly 88 million subscribers.

All of the cable networks are taking a hit, but ESPN's struggles are unique. Subscribers pay an average of $7.54 a month for ESPN, more than any other cable bundle channel. ESPN is also tied to sports-programming contracts at escalating rates, a scary dynamic when the number of paying subscribers is perpetually shrinking.

ESPN is hoping that an over-the-top ESPN streaming platform that it will roll out next year will smoke out cord-cutting sports fans. At the other end of the spectrum, however, it's likely that a lot of the 88 million U.S. homes currently paying for ESPN aren't watching.

Making basketball exciting with an arena-like complex at the shopping and entertainment hub of the world's most visited theme park resort won't turn ESPN around, but it's a smart thing to do. Disney World offers exposure for its brands and intellectual properties.

The massive Florida resort already houses an ESPN-themed restaurant and the ESPN Wide World of Sports multi-use athletic facility. There's an entire hotel property themed to sports. The NBA Experience won't be the most important piece in Disney's in-park strategy to keep sports programming relevant, but it will be the next piece at a time when the media giant can use any help that it can get.

Setting an opening date of 2019 -- just as the 14-acre Star Wars Land opens -- is also a great way to make sure that The NBA Experience launches at a time when the resort will be packed with visitors. Saving ESPN may be more of a desperate half-court shot than a casual layup, but the new hoops-promoting attraction is a smart attempt at a buzzer beater.