The leading steelmaker saw its profits fall from last year and the prior quarter, though they beat most expectations. Here's a look at what Nucor has to work past to return to growth.

Nucor Corporation (NUE 2.01%) reported third-quarter financial and operating results on October 19. Despite a slip in earnings sequentially and from the year-ago quarter, its results came in well within expectations. It was the continuation of what has been a great year for the company: Nucor's profits through the first nine months of 2017 are higher than any full year since 2008.

But as the year-over-year drop indicates, Nucor isn't delivering as well as it could. Here's a closer look at the results, the challenges the company is facing, and what management is doing about it. 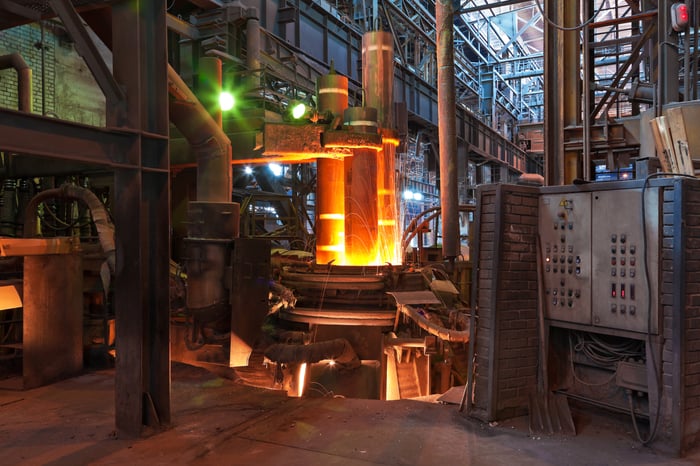 Nucor reported third-quarter net income of $0.83 per share, down from $1.00 per share in the second quarter and $0.95 per share in last year's third quarter. On the earnings call, CFO Jim Frias said that many of Nucor's facilities are "operating well below peak performance." This was partly due to an unplanned outage at Nucor's DRI (direct reduced iron) facility in Louisiana that lasted most of the quarter, but also due to lower capacity-utilization rates and lower margins from Nucor's steel mills.

This isn't the first time Nucor's Louisiana DRI facility has been a problem. Since the facility commenced operation in late 2013, it has been forced to go offline for months at a time several times, costing the company millions in unplanned expenses, as well as affecting its iron feedstock costs.

CEO John Ferriola said that finished steel imports were up 15% from 2016 levels through the first nine months of the year, commanding 27% of the U.S. market. This has weighed heavily on every domestic steelmaker, and the industry is forging ahead with trade cases claiming that a large portion of imported steel is being illegally subsidized by its nations of origin. Nucor has been one of the leading voices in this issue. Ferriola said the following on the call:

2017 has seen a renewed search of illegally traded imports into the U.S. Through the first nine months of 2017, finished steel imports have increased an estimated 15% compared to the same period last year. The year-to-date market share for finished steel imports stands at approximately 27%. Nucor continues to believe significant work remains to be done to achieve free and fair trade for U.S. manufacturers. More specifically, it is time for comprehensive and broad-based remedies that address illegal foreign trade practices that have materially weakened our nation's economic viability.

A number of trade cases are working their way though the International Trade Commission that will likely result in tariffs against steel imports from countries that are illegally subsidizing their steelmakers.

Even with imports affecting capacity utilization, Nucor reported steel shipments were up 18% from last year and sales to outside customers increased 12%. This is a product of both increased capacity via acquisitions over the past year, as well as strong demand in segments with less exposure to imports. However, management is steadfast that illegally subsidized imports are playing a role in deflating steel prices, and that's weighing on Nucor's profits.

Since the prior steel market peak in 2008, Nucor has invested billions of dollars to expand its business. This includes new capacity, but also expanding its exposure to more profitable and higher-demand steel products. In the third quarter, Nucor acquired two facilities that can produce up to 200,000 tons of cold finished bar products. At a cost of $60 million, the company increased its cold bar and wire capacity by almost 20%, to 1.1 million tons per year.

[W]e are in a great cash position -- this is again one of those cases where having a very strong balance sheet, it gives us opportunities to continue to build upon the five drivers of profitable growth. ... So the investments that you see may, going forward, will all be in the area of improving our value proposition by providing higher-value products to value appreciative customers willing to pay for that higher value, and what we will be focusing on.

Nucor's strong balance sheet, with $1.6 billion in cash and $1.5 billion available on its unsecured revolver give it incredible flexibility to pick and choose the best growth investments. Ferriola has consistently proved an excellent capital allocator, with the company delivering some of the best returns on invested capital in its industry: 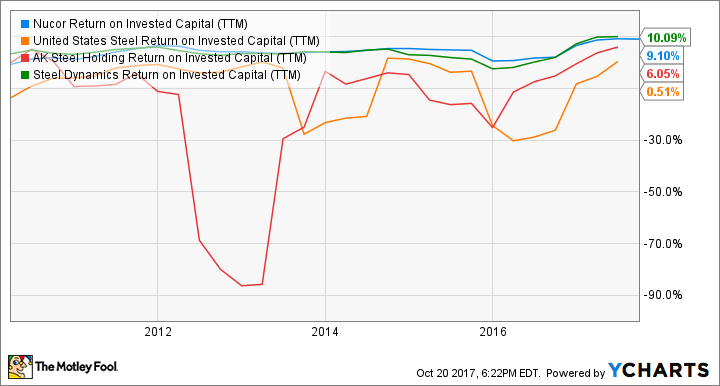 The Louisiana DRI facility continues to swing back and forth between delivering a great, low-cost iron feedstock and being out of operation for months at a time. Management says that it's taking actions to address it. Based on the success of Nucor's Trinidad-based DRI facility, one would think it will be able to -- finally -- get this facility consistently operating well.

But when it comes to the impact of imports, management can only do so much. This is where Nucor's business model and strong capital allocation by management has paid off for years, keeping the company profitable, while its peers struggle. The good news is that steel demand has remained quite strong in North America, and that should remain the case based on economic demand and infrastructure needs.

Hopefully, the imports issue gets resolved soon. If that does happen, Nucor's ability to increase output, and a likely increase in steel prices, would result in big profit growth.