Intuitive Surgical (NASDAQ:ISRG) shareholders like myself have gotten spoiled. After some lean years following the onset of the Affordable Care Act and the concurrent tightening of hospitals' budgets, the company has been on a tear: Shares have tripled since early 2014. The main reason is that the daVinci surgical robot is being used in more and more procedures, and that growth showed little signs of slowing down this quarter. Putting it in perspective, here's what this quarter's 15% growth looks like.

Keep in mind that, when the year began, management was calling for procedure growth of 9% to 12%. That firmly has been blown out of the water. So what else happened of note? Read below to find out.

Here's how the company performed on the headline numbers.

There are a lot of caveats to this quarter's filing, however. First, the company's revenue was helped along by a $21 million contribution that was one-time in nature. Back when Intuitive came out with its daVinci Xi, it set aside a good chunk of cash for customer trade-ins. When the window for such trade-ins closed, that cash was returned to the income statement. Had it not been for that boost, revenue would have risen 15%, to $785 million. 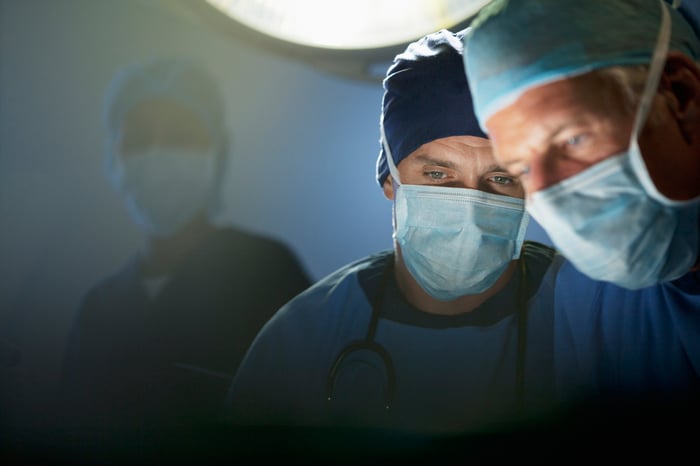 There are a few key reasons why underlying earnings growth was slower than revenue growth: lower sales prices on daVinci Xi systems, higher stock-based compensation, and a jump in operating expenses of 25%. But none of this should be surprising to long-term investors: CEO Dr. Gary Guthart has made it clear that he believes we are still in the early innings of robotic surgery and he's willing to spend big to continue pushing innovation in the field.

Digging deeper: What else happened during the quarter?

Here's a quick rundown of other key information from the quarter:

Just as important, the company's cash balance grew $379 million, to $3.8 billion -- an impressive war chest for a company with absolutely no long-term debt.

Speaking on the conference call, Guthar said: "Drivers of growth include U.S. inguinal and ventral hernia repair, colon and rectal surgery and thoracic surgery, as well as urology and gynecology procedures outside the United States." The company also said that while results from China were strong, they were being held back by no new quota being issued by the government for placement of daVinci systems in civilian hospitals.

As mentioned, when the year started, procedure growth was expected to show 9% to 12% growth. Every quarter, that figure has been bumped up, and this quarter was no exception. Management now believes full-year procedure growth will come in at 15% to 16%.

There are a few key pieces for investors to remember. First, the average selling price of daVinci systems is going to be lower. While this lowers sales, income, and margins from the systems segment, it's just another way of getting "razors" in the hands of surgeons so that they'll need more "blades" -- instruments and accessories -- as they utilize the robots over the long term. It's a trade-in that long-term investors should be willing to accept.

Further, the company will continue to invest heavily in the future. That will include both increased spend and share dilution. While no one likes hearing it, it's the price shareholders will have to pay for a continued wide-moat business as competition finally enters the market.