The company has survived a challenging retail environment that closed the doors of many of its brick-and-mortar peers. What lies ahead for the last man standing?

Best Buy (BBY 1.37%) shareholders have had reason to cheer lately. Unlike competitors HH Gregg, Circuit City, and Radio Shack, the company has survived the retail shake up, and its stock has handily outperformed the broad market over the past five years. So how did the company do it?

Five years ago, Best Buy was suffering from declining revenue and profitability, and its former CEO was fired for having an improper relationship with an employee. Enter new CEO Hubert Joly, a former McKinsey & Co. consultant, whose turnaround effort was detailed in a recent New York Times piece. The steps included:

With Best Buy on firmer footing, what of its future? Though the company is now the leading brick-and-mortar electronics retailer, it still faces stiff competition from Amazon, a rejuvenated Wal-mart, and even Costco, which sells big-ticket electronics such as flat screen TVs.

Its future largely depends on how management executes the "New Blue" plan, which put the company on the offense. 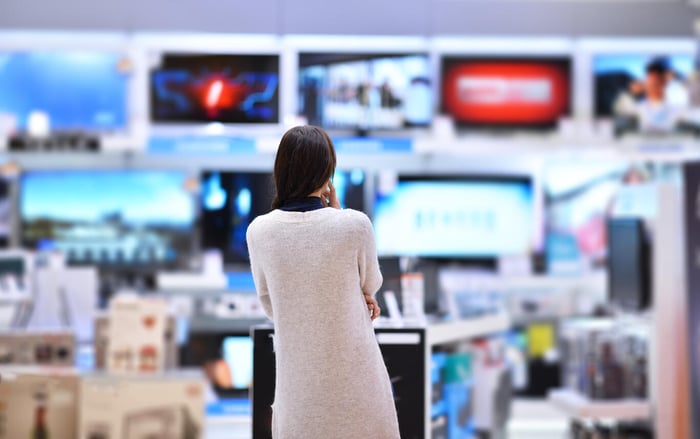 "New Blue" is all about becoming the undisputed electronics authority, with high-touch services and support offerings. Since the company's biggest competitors are now giant big box and e-commerce retailers that sell a wide variety of products, Best Buy is doubling down on specialization. And since consumer electronics are largely big-ticket items (phones, TVs, and laptops), becoming a trusted advisor is absolutely the right strategic move, in my mind.

Changing what it sells

The new plan highlights several new product areas. These include smart home systems, and Best Buy will roll out smart home features to 450 stores by the end of this month. Also on the agenda is assured living offerings, geared toward senior citizens, which includes non-intrusive sensors to monitor loved ones' health, as well as automation of things like lighting and temperature. Finally, the company is looking to roll out a "Total Tech Support" offering, whereby Best Buy's famous Geek Squad will service all devices in an entire household, not just a single product, for $19.99 per month or $199 per year.

Changing how it sells

Best Buy is also moving even more toward e-commerce, with accelerating online sales that should reach over $5 billion in the current fiscal year, and the continued rationalizing of its store footprint, as more physical stores roll off leases.

The boldest initiative is a new in-home advisor program, where a Best Buy advisor will actually come to your house and consult on your appliances, smart devices, or entertainment system, for free. After testing the offering in several markets, Best Buy noticed an increase in margins, order values, and incremental purchases, and it rolled out the service to all markets, with 300 in-home advisors, last month.

Is Best Buy a buy?

Despite its recent rally, Best Buy is not overly pricey, at less than 16 times trailing earnings. However, the company only forecast 4% growth for this fiscal year at its recent investor day, which disappointed some investors.

I don't necessarily think Best Buy will lead the market in returns going forward, but for a company that gives shareholders a growing 2.4% dividend and even more in share repurchases, those looking for a well-run retailer should take a look at the New Blue.

Best Buy Is Shrinking: Time to Sell the Stock?
370%