Please ensure Javascript is enabled for purposes of website accessibility
Log In Help Join The Motley Fool
Free Article Join Over 1 Million Premium Members And Get More In-Depth Stock Guidance and Research
By Keith Speights - Oct 23, 2017 at 7:03AM

Hepatitis C probably won't be the biggest story for the biotech.

Things are looking up for Gilead Sciences (GILD -1.32%) for the first time in quite a while. Although the big biotech stock fell in the first half of 2017, its share price is up big since late June. Gilead announced better-than-expected results for its second quarter in July. And the company announced a much-anticipated acquisition in August with its deal to buy Kite Pharma.

Gilead provides an update on its third-quarter performance after the market closes on Thursday, Oct. 26. Can the biotech keep its momentum going? Here are three things you should expect in Gilead's third-quarter results. 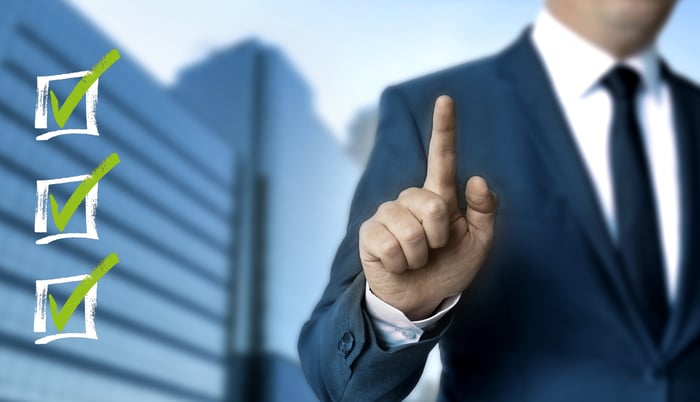 1. Another stellar performance for the HIV franchise

Gilead should again report glowing sales numbers for HIV drug Genvoya. Sales for Genvoya soared in the second quarter to $857 million, up 184% year over year and over 11% sequentially. Fully ramping up in France, the biggest HIV market in Europe, should help boost sales in the third quarter. The company is also seeing solid sales growth for HIV drugs Descovey and Odefsey.

Genvoya knocked Truvada out of the top spot in Gilead's HIV franchise. Although overall revenue is falling for Truvada as patients switch to its newer drugs, around half of U.S. sales for the drug come from pre-exposure prophylaxis (PrEP). Gilead expects PrEP sales to continue to grow.

What about the Food and Drug Administration approval in June for Teva's (TEVA 5.63%) generic version of Truvada? That approval won't impact Gilead's third-quarter results. Actually, it won't impact the big biotech's results for a long time to come. Gilead CEO John Milligan said in July that the company doesn't expect generic competition to Truvada in the U.S. until 2021.

2. A battle between good news and bad news in HCV

Look for both good and bad news for Gilead's hepatitis C virus (HCV) drugs when the company announces its third-quarter results. The good news is that Gilead won U.S. and European approval for pan-genotypic HCV drug Vosevi in July. This new drug completes the biotech's HCV portfolio and should provide an incremental boost to its third-quarter revenue.

The primary bad news for Gilead in HCV could come from AbbVie (ABBV -0.63%). In August, AbbVie won FDA approval for Mavyret, its first HCV drug that can treat all six major genotypes of hepatitis C. Mavyret could present a significant challenge for Gilead's Epclusa, especially since AbbVie priced its drug lower than many anticipated.

There's also the continued decline in HCV patient starts. In the second quarter, Gilead reported that the drop wasn't as bad as expected. However, the company was clear that the bottom still hasn't been reached. My prediction is that the negatives in HCV outweigh the positives, particularly since Vosevi is targeted toward a limited population of patients who didn't fully respond to prior treatments with Harvoni, Sovaldi, or Epclusa.

Gilead has already warned that its cash flow will probably be lower in the second half of 2017. There's nothing to worry about, though. The anticipated decrease will come primarily from cash payments for government rebates in the U.S. and other countries.

Even with somewhat lower cash flow and closing of the acquisition of Kite Pharma, Gilead should still be in great shape with its cash position. At the end of the second quarter, the company had $36.6 billion of cash, cash equivalents, and marketable securities. Gilead financed the $11.9 billion Kite buyout through a combination of cash, bank debt, and senior unsecured notes. There will be plenty of cash remaining for Gilead to use for other purposes -- for example, funding even more acquisitions.

While investors will certainly be interested in Gilead's third-quarter numbers, there should also be plenty of discussion by the company regarding other important topics that can't be seen on a financial statement. At the top of the list are two key recent developments.

One is the FDA granting priority review designation to Gilead's bictegravir combo for treating HIV. An approval decision is expected by Feb. 12, 2018. This combo holds the potential to cement Gilead's dominance in the HIV market.

Even more talk will likely focus on the FDA's approval on Oct. 18 of Kite's CAR-T therapy Yescarta (axi-cel) for treating relapsed or refractory large B-cell lymphoma. Gilead executives have already fielded questions about pricing for the drug; I expect many more. Although the bictegravir combo is more important financially to Gilead, approval of Yescarta officially makes the big biotech a leader in the oncology arena. Over the long term, Yescarta could represent the future for Gilead.