The world's largest restaurant operator by sales volume is gearing up for a big quarterly report on Tuesday morning. Expect rising profits and shrinking revenue.

The turnaround at McDonald's ( MCD 0.12% ) continues. The fast-food giant has seen its shares nearly double since Steve Easterbrook was named the chain's CEO in early 2015, but those dividend-adjusted stock gains also raise the bar when it comes to market expectations. The stock hit yet another all-time high on Friday. The next big test on that front for McDonald's comes on Tuesday morning, when the Big Mac daddy reports financial results.

Everything from the late 2015 push for All-Day Breakfast to the decision to introduce upscale menu items including artisan sandwiches and McCafe premium beverages seems to be clicking with consumers. Even its aggressive push for home delivery via UberEATS and a mobile ordering app that cranks out some pretty chunky discounts are working. McDonald's may have fallen out of favor when it rattled off two years of consistently negative stateside comps through late 2015, but it's back with a vengeance. This week's third-quarter results will be critical in keeping the good times going. 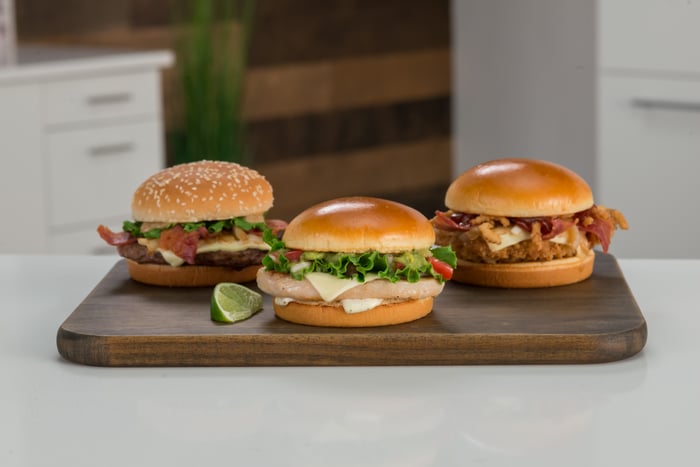 Wall Street pros see Tuesday's numbers going in different directions. They see earnings per share climbing more than 9% to hit $1.77, but they also see revenue declining nearly 11% to $5.74 billion. It's easy to wonder why a concept posting declining year-over-year revenue is hitting all-time highs -- especially in light of this so-called "restaurant recession" that's roughing up most chains -- but there's more to McDonald's forecast than meets the eye.

Easterbrook has spearheaded the refranchising efforts that find the company handing off company-owned eateries to seasoned franchisees. The goal at McDonald's is to refranchise 4,000 locations this year, a move that would increase the number of restaurants owned and operated by independent operators to a whopping 93%.

Trading lower-margin unit-level sales for higher-margin franchisee royalty streams is a smart strategy. Letting franchisees deal with the rising labor costs and app discounts is allowing McDonald's to grow its bottom-line results. Revenue may have declined for 12 consecutive quarters -- a streak that will likely stretch to 13 periods tomorrow morning -- but earnings per share have moved higher in all but one quarter over the past two years as widening margins and share buybacks have propelled per-share results higher.

Franchisees don't seem to mind. Mark Kalinowski at Nomura raised his price target on McDonald's from $176 to $183 last week after surveying 27 domestic franchisees covering 241 different stores. His findings show robust unit-level sales, leading him to raise his comps forecast for the third quarter to 3.9% for domestic locations.

McDonald's isn't done. It plans to shave another 5% to 10% in general and administrative overhead once its completes its refranchising process, part of the burger titan's long-term plan to return $22 billion to $24 billion to shareholders in the form of dividends and share repurchases over the next three years.

The Golden Arches have been earning their shine. We'll find out Tuesday morning if the stock is worthy of commanding even higher highs if it's able to deliver another period of smart bottom-line gains.