Q3 2017 was a knockout quarter, reversing some of the angst investors had been feeling.

Skechers (SKX -0.86%) stock is making up for investor pain from earlier in the year in a big way. The stock climbed 41% on Friday, after the company reported on the quarter that ended Sept. 30. There was a lot to please shareholders, as the massive daily increase indicates. 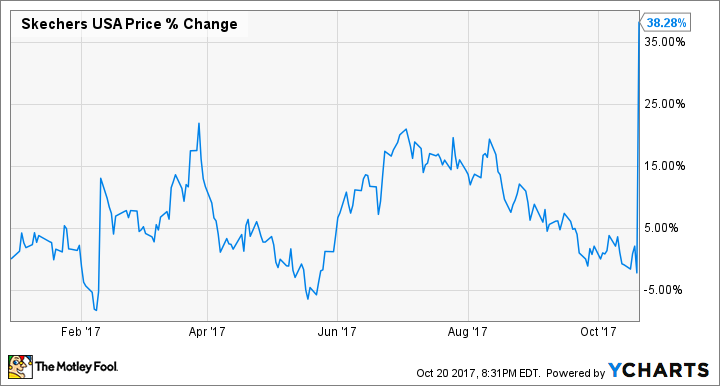 Though Skechers' top line has been steadily growing the past few years, the bottom line has been headed the opposite direction, as the shoe company invests in overseas store openings. All of that changed in the third quarter, though, with Skechers reporting not just a record for quarterly sales but also a big jump in the bottom line, too. 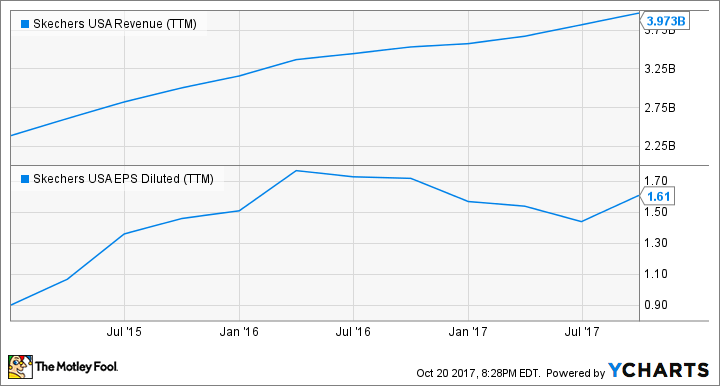 Revenue in the third quarter -- typically a busy time of year because of back-to-school shopping -- was $1.095 billion. That's a 16% increase over the same period last year and keeps the double-digit sales figure from the last quarter rolling.

More importantly, though, was the bottom line. Earnings per share increased to $0.59, far better than the $0.42 to $0.47 management said to expect, and a 40% increase over last year's mark. It was that big surprise that sent share prices skyrocketing.

Skechers' results fly in the face of its competitors, most notably Nike (NYSE: NKE) and Under Armour (NYSE: UA)(NYSE: UAA), which have been reporting a slowdown in sales and whose stocks have struggled as a result. What's the secret sauce? Skechers fills a niche that its peers largely ignore: a simple and affordable shoe for casual use rather than high-performance athletic footwear. 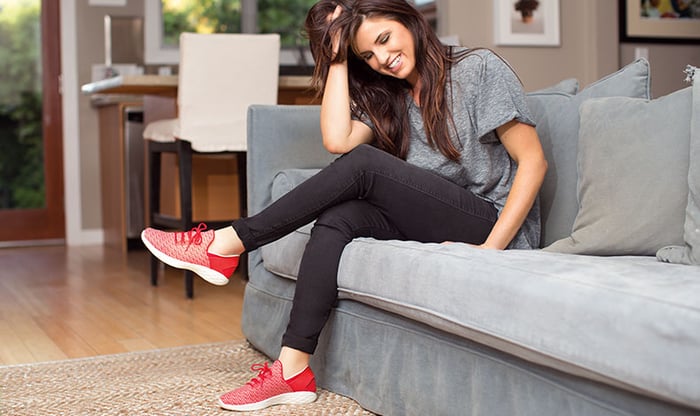 The company also goes about signing star power differently, as evidenced by its latest work with international singer Camila Cabello and retired NFL quarterback Tony Romo. Compare that with high-profile deals at Nike and Under Armour with the likes of current NBA superstars LeBron James and Steph Curry.

International markets have been the big push the past few years, bringing the brand of practical footwear around the globe to both developed and emerging markets. Management's goal was to achieve at least 50% of sales from overseas, a goal it has been consistently hitting all year. Outside the U.S. is still the biggest opportunity for Skechers, though, and management continues to funnel money into advertising to support its ventures in markets such as South Korea, China, India, and South America.

The fourth quarter of the year is typically a sleepy one for Skechers, and the company expects no difference this year. Total sales are projected to be between $860 million and $885 million, and earnings per share are forecast to be between $0.09 and $0.14. That's significantly off the third-quarter knockout, but it would still represent a 12.5% sales increase and a 125% earnings increase over last year at the low end of guidance.

What it means for shareholders

After the second quarter's mixed results, this latest report was an about-face for Skechers. It looks as if the company's multiyear investment in top-line growth is beginning to pay off, and a 40%-plus stock gain in a day is always nice. With the company continuing to forecast sales and earnings growth, this stock's run may not be over yet.