There was a lot going on for the burrito roller in its most recent quarter. Here are the key highlights and what investors should look for in Tuesday's third-quarter report.

It's been a rough few months for Chipotle Mexican Grill (CMG -0.04%). Shares of the fast casual chain are down over 20% since its third quarter started on July 1, and the stock's hopeful comeback has seemingly come off the rails.

Yet another food safety incident in July was followed by the mixed reception of its long-awaited queso offering. With Chipotle set to report earnings after the market close on Oct. 24, let's see what investors should expect from the quarterly results and beyond. 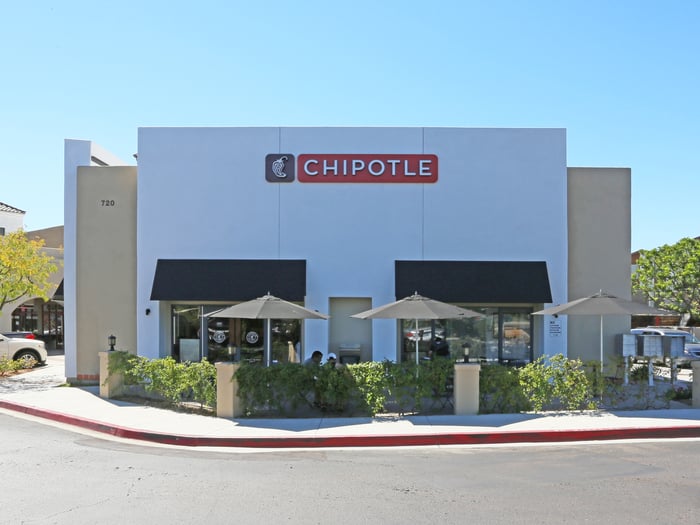 According to Thomson Reuters, analysts have Chipotle earnings coming in at $1.63 per share, up from $0.27 a year ago. They see revenue growth of 9.7% to $1.14 billion. While that earnings growth may seem promising, investors should remember that a year ago, Chipotle was still reeling from the aftermath of the E. coli crisis, and the company was spending aggressively on loyalty programs and new safety procedures.

Earnings should naturally bounce back, but expectations are still muted. Momentum could already be dissipating as growth decelerates from the prior quarter, and the summer months have historically been the company's strongest season.

That said, Chipotle has also topped earnings estimates in its first two quarters this year, giving investors reason to believe that the company could top low analyst expectations once again.

In addition to the norovirus incident and queso rollout, Chipotle named Laurie Schalow as its chief communications officer, a newly created position. Schalow comes from Yum! Brands, where she held several different positions in the communications department, including vice president of public affairs. The move seems long overdue, as Chipotle's E. coli crisis was exacerbated by poor public relations. Management at the time was slow to apologize, and the company's response to the latest norovirus scare was ham-handed. As the communications chief, Schalow will hopefully ensure that the company addresses future incidents with a more skilled hand.

The company made another big hire during the quarter, tapping Richard Blais to head Tasty Made, its new fast-casual burger concept. Blais is a James Beard-nominated cookbook author and winner of Top Chef All Stars, having cooked at some of the country's top restaurants, including The French Laundry and Chez Panisse.

A year after opening its first location in Lancaster, Ohio, Tasty Made still hasn't added a second one, and the restaurant rates a middling three stars on Yelp. While Tasty Made's start may not be auspicious, investors are still hopeful that Chipotle can come up with at least one more growth concept in addition to the namesake chain. Last year, Chipotle pulled the plug on ShopHouse, and four years after partnering with the founders of Pizzeria Locale in Denver, the company has opened just seven locations.

No fast-food concept in the U.S. is more popular than burgers and fries, so there's a possibility that Tasty Made takes off under the guidance of Blais. Expect to hear more about both of these hires on tomorrow's call.

The most important data point in the earnings report will be comparable sales. Revenue growth at established restaurants and average restaurant sales are the best way to track the company's recovery, and Chipotle is lapping a quarter when it posted a 21.9% drop in comps. Comps are likely to bounce back -- it's just a question of how much.

Investors should also keep an eye on the two-year comparable-sales figure, which takes into account last year's slide. Chipotle doesn't report this figure, but you can figure it out by combining the numbers from each year. The company's two-year comp has been tracking around negative 17%. In order to beat that mark, the company would have to report same-store sales growth of at least 6% tomorrow.

If the stock is going to escape from its current malaise, Chipotle needs to surprise significantly to the upside on at least one of these key metrics: comparable sales, earnings per share, or overall revenue. Management pulled a big lever when it rolled out queso, and if that doesn't generate the expected sales bump and momentum going into the fourth quarter, an extended recovery becomes even more challenging.

Even after all its troubles over the last two years, Chipotle stock still trades at a premium. It's now up to management to prove that their company is worth it.