This Tuesday may have been D-Day for Chipotle Mexican Grill, Inc. (NYSE:CMG), or better yet, Q-Day for queso. After much anticipation, the burrito roller is finally making the cheesy dip available nationwide. It was a quick rollout from a test that began in one store just two months ago. 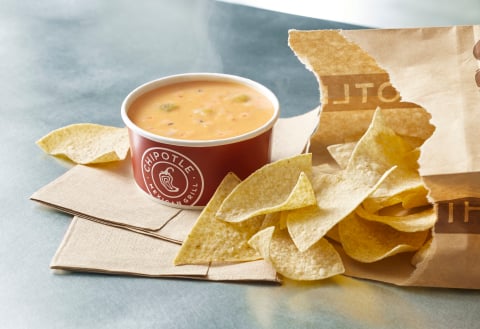 Not surprisingly, there was plenty of delight at the news on Twitter as fans chimed in.

Chipotle now has queso, and I have never been happier. pic.twitter.com/qucyqgBd5A

PSA : Chipotle started their queso today and it's so good! 😩@ChipotleTweets thanks for listening to our begging!

It was a long road to this point, as Chipotle fans had demanded the cheesy dip for years, but as recently as a year ago, CEO Steve Ells explained that the company didn't serve it because it would require artificial ingredients that the company refuses to use. Since then, under pressure from a customer exodus following 2015's E. coli outbreak, the company found a way to make queso using all-natural ingredients.

Ells said in an internal memo that queso was the most-requested item that the company didn't sell, and, "All of our competitors sell queso, and we know some customers don't come to Chipotle because we don't offer it."

The queso rollout is on the latest example of Chipotle straying from its historical strategy, which centered on a small, gimmick-free menu and organic marketing, instead imitating traditional fast-food chains. Since the E. coli outbreak, the company launched a rewards program, a national advertising campaign, offered food giveaways like guac & chips, and has added new menu items like chorizo, dessert, and now queso.

Why queso is so important

Chipotle's stock chart may offer the best explanation for the crisis the company has experienced since the first E. coli outbreak. 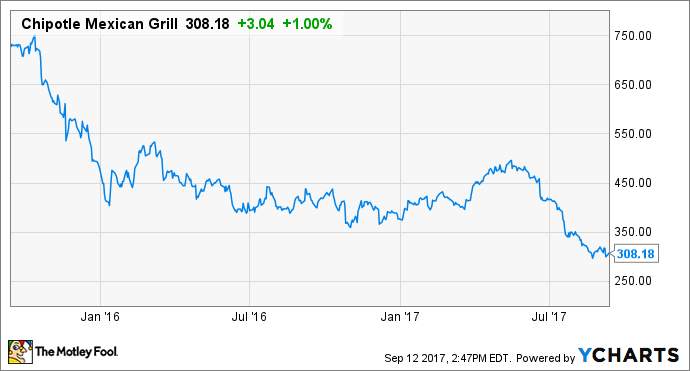 Shares of Chipotle have lost more than half of their value since the first E. coli outbreak, and efforts like the ones above have failed to bring customers back in large numbers. In the company's most recent quarter, comparable sales increased 8.1%, which seems like a strong performance until you factor in the 23.6% drop the year before. Over the last two years, comparable sales are still down 17.4%.

Its brand perception remains near all-time lows, especially after the company had to close a Virginia store in July because of a Norovirus outbreak.

After several previous attempts to lift sales failed, queso may be the last and easiest lever Chipotle can pull in order to reestablish its brand as the industry leader it once was. The lack of queso at Chipotle was often cited by burrito fans as a reason to patronize rivals like Moe's or Jack in the Box (NASDAQ:JACK)-owned Qdoba. Indeed, Ells makes a persuasive case for Chipotle's selling it. Why wouldn't the company offer the top-demanded item that its competitors all carry?

Queso has the benefit of not only drawing new customers in, who were formerly visiting Chipotle's competitors, but it should also help grow the average check as customers add queso to their orders. A new protein like chorizo can't do that. The addition of queso could cast a much-needed halo on the brand, and should help with margins at a time when avocado prices are at record highs since queso is often a substitute for guacamole.

Beyond queso, there are two traditional fast-food concepts Chipotle has yet to borrow: breakfast and drive-thru. Those two additions could be impactful as well, but the company ended an experiment with breakfast at a single airport location years ago. As for drive-thru, it will be testing its first such location at an Ohio restaurant this fall, but a mass rollout of drive-thru would be more difficult as many of its restaurants simply aren't suited to it, and the buildout would be expensive at others.

It's been almost two years since Chipotle first got hit by the E. coli scandal. Time is running out for the company to turn the page. If queso can't do it, the chances of the stock returning to its former heights will be that much dimmer.