The company is testing queso, and reports indicate it will go national on Sept. 12. The chain's in a sticky situation, and when it comes to queso that's a good thing.

Your fresh but not-so-healthy meal at Chipotle Mexican Grill (CMG -0.05%) is apparently about to get more decadent. The out-of-favor burrito chain has been testing queso -- the gooey cheese that's a staple at table-service Mexican chains as well as many of the Chipotle's fast-casual rivals -- in recent weeks, and it could go nationwide in two weeks.

Credit Suisse analyst Jason West's store checks indicate that queso will go national on Sept. 12. It is currently being tested at hundreds of locations in California and Colorado as well as its Chipotle NEXT Kitchen test concept store in New York City. West feels that queso could help spark an uptick in sales, but it's not enough to sway him from his neutral position. He is sticking to his $320 price target.

However, let's give queso the benefit of the doubt for a company that can surely use a break. The new menu addition can be a game changer for a company hungry for a catalyst after seeing its stock lose more than half of its value since peaking two years ago. Let's go over the reasons why Chipotle's next move could be its biggest move. 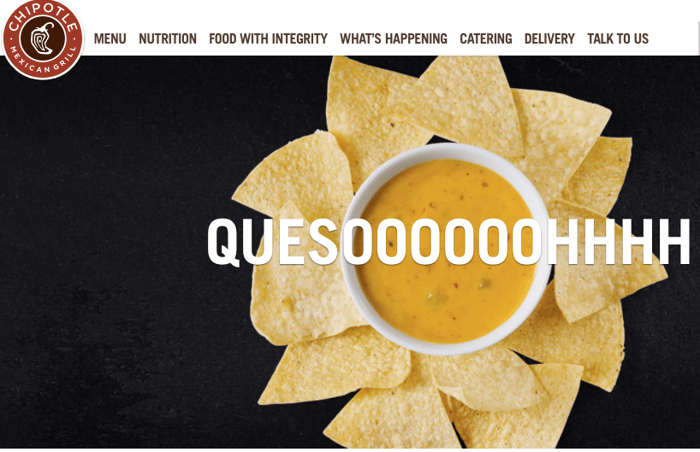 1. Queso goes with everything

New products haven't been catalysts for sustainable growth in the past. The last major menu addition -- chorizo in late 2016 -- wasn't enough to turn negative comps around. Comps were already soaring at a double-digit clip when its Sofritas chili-braised tofu was introduced in early 2014, but the heady growth at the time would go on to decelerate sharply in subsequent periods.

Queso is different. It's not another protein choice as we saw with chorizo and Sofritas. Queso is an ingredient that goes with anything on the menu, and the last time we saw that -- brown rice added in 2011 -- it was done more subtly than the noise that Chipotle will be making with the availability of the popular melty cheese. Just as the nutty consistency of brown rice opened up the flavor profiles available, queso fans will probably want to try the new ingredient across various items in future visits.

The only topping currently on the national menu that comes with an additional charge is guacamole, something that Chipotle is currently grappling with as avocado costs skyrocket. Queso is the assembly line's second upcharge item.

Queso doesn't cost much. The Chipotle NEXT Kitchen in New York City charges $1.25 for queso as a topping or $2.05 for a 4-ounce dipping cup. The key here is that it will be incremental, pushing average checks higher. At a time when comps are starting to recover but are still far away from the store-level sales of 2015, this is the kind of boost that can help push comps higher without a meaningful uptick in traffic.

The attach rate of tortilla chips to a Chipotle order doesn't seem very high, but that's because dipping sauces are currently limited to the slate of available salsas. Queso naturally changes things. Queso turns chips into nachos, and while it's a delicacy that some of its rivals will bake up with protein and other toppings to create a big-ticket meal, even in the primitive form that Chipotle's currently testing it -- as a 4- or 8-ounce cup to dip or cover the chips -- will be a savory new option.

Chipotle's had trial runs of premium margaritas, frozen margaritas, and desserts, but the number of people looking to get their drink on during a lunch break or sweet-tooth indulgences is limited. Chips with queso is a logical addition to most meals outside of allergy or caloric related considerations.

Nicole Miller Regan at Piper Jaffray was encouraged after a recent visit to Chipotle's NEXT Kitchen, noticing that most customers were opting for queso. It's a small sample size, sure, but in two weeks all of Chipotle may be offering queso.

The turnaround at Chipotle won't be easy, but if a messy recovery means that the chain will have to get its hands gooey with queso, roughed-up shareholders will be the first to ask for the burrito roller to pour it on.