The household products giant has been a popular dividend play for ages, but is it still a buy today?

Procter & Gamble (PG 2.53%) has long been an admired company and a sought-after dividend stock.

The household goods specialist, which makes popular products like Crest toothpaste, Tide detergent, and Gillette razor blades, has been around since 1837, and it's pioneered many products that are now household staples like laundry detergent and disposable diapers.

Today, the company has 22 billion-dollar brands, and it's a Dividend Aristocrat, having raised its quarterly payout for 61 years straight.

While P&G's pedigree is exceptional, the stock's recent performance has been more questionable. It's underperformed the S&P 500 in virtually any time horizon over the last 10 years, and has also returned less than its peers over the past five years. 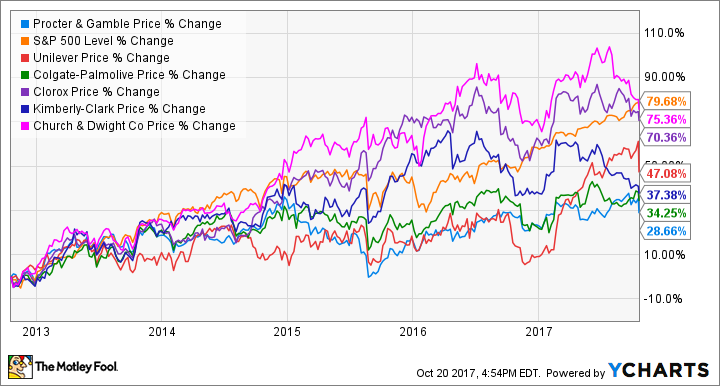 Let's take a closer look at P&G's prospects today to determine whether the stock is a buy.

Above all, Procter & Gamble's weak returns stem from its slow growth. Like its other consumer staples peers, P&G is operating in mature markets and categories, but the company has been slower to innovate and anticipate market shift than its peers. While P&G was busy selling off noncore brands, rival Unilever (UL 1.86%) scored a coup by scooping up Dollar Shave Club for $1 billion. P&G has been losing share in the men's grooming market because of subscription-based razor companies like Dollar Shave Club and Harry's, and organic sales in grooming fell 6% in the first quarter of fiscal 2018 largely because the company was forced to cut prices to compete. Overall, organic sales, which strip out the effect of acquisitions and divestitures, increased just 1% in the period, though beauty was a unique bright spot, showing off 5% organic growth.

Meanwhile, the company continues to target 2%-3% organic sales growth and 5%-7% core EPS growth for the fiscal year. Those are decent numbers, but investors can find better growth in similarly valued consumer stocks elsewhere.

The state of the dividend

Many investors look to a defensive stock like P&G for income. As a maker of consumer staples, its business tends to be recession-proof, and its dividend-paying history demonstrates its commitment to shareholders even when times are tough.

P&G today offers a 3% yield, and its last four dividend hikes have been relatively modest at just an average of 3.5% a year. Based on last year's core EPS of $3.92, the company has a payout ratio of 70.4%. That's low enough that it could raise its dividend a bit without corresponding earnings growth, but it's close to the 80% mark, which is generally considered a maximum advisable limit for dividend disbursements as a percentage of income.

The company's dividend is solid, but as with growth, there are better possibilities elsewhere.

P&G survived a proxy fight from Trian's Nelson Peltz, but he succeeded in pointing out a number of flaws with the company's strategy and performance such as its sluggish growth, market share losses, and inability to cultivate smaller brands.

Over the long term, the Pampers parent may have other problems as Amazon.com and Wal-Mart's Jet.com have been eyeing private-label household products, and the rise of e-commerce in general is upending consumer habits. P&G has worked extremely hard to win prized spots in drugstores and supermarkets at the end of aisles and on shelves that are at shoppers' eye-level, but that doesn't matter on the internet.  Consumers have been showing an affinity for smaller, modern brands that have become popular alternatives to the company's mainstays. Small consumer-goods companies are growing three times as fast as large ones.

For conservative income-seeking investors, P&G likely fits the bill. The stock is a safe bet if you're looking to preserve your assets, but its recent track record of underperforming the broad market and its peers is uninspiring. While its turnaround efforts have shed the company of unneeded brands, they have not yielded any formidable fruit in the form of growth or innovation. For the average investor, this stock is not a buy.

This Dividend King Has Another Headwind to Fight
371%