Modern medicine has offered some revolutionary products and techniques, and many companies are looking to help sustain the pace of medical advances. NuVasive's (NUVA 0.76%) specialty in spinal surgery has been noteworthy, and that's been good news for the company's fundamental growth prospects as well as its long-term investors. Yet some recent concerns about executive departures and other issues have had some shareholders nervous about NuVasive's immediate future.

Coming into Tuesday's third-quarter financial report, those watching NuVasive wanted to see substantial top-line gains translate into much better earnings. The spinal surgical specialist was able to deliver great bottom-line growth, but sluggish sales didn't point to as much strength as some were looking for. NuVasive's response in announcing a stock buyback could make some short-term oriented traders happy but calls into question whether the company is making the best use of its available capital. Let's look more closely at NuVasive to see what's coming down the road for the company. 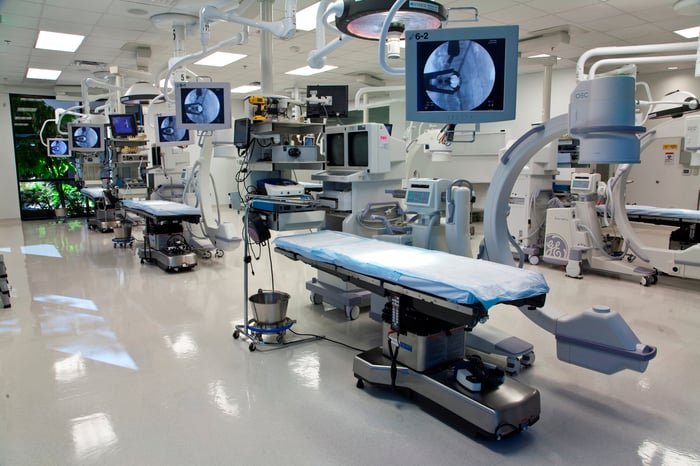 NuVasive's third-quarter results were mixed in the eyes of investors. Revenue was up just 3% to $247.4 million, which was only about half the growth rate that those following the stock were expecting. Bottom-line performance was more encouraging, though, with adjusted net income coming in at $26.7 million, up by more than a quarter from the year-ago period. That worked out to $0.52 per share, topping the consensus forecast among investors for $0.48 per share.

In addition, some event-specific issues hurt NuVasive during the quarter. The recent hurricanes hitting the U.S. Gulf Coast and the Caribbean cost the company about $5 million in total revenue, and NuVasive estimated that its sales would have risen by 6% if it hadn't been for the disruptions that the storms caused.

Apart from those disruptions, CEO Greg Lucier was proud of how well the company did. "Our results for the third quarter reflect continued strength in our international business," Lucier said, "with 46% growth on a constant currency basis year over year, representing the fourth consecutive quarter with growth in excess of 20%.

Looking ahead to better times

In addition, NuVasive sees plenty of reasons for excitement among those following the company. In the CEO's words, "We are making significant inroads in the deformity market with our Reline posterior fixation system and have launched multiple spinal hardware technologies over the last quarter that continue to enhance our differentiated and procedurally focused portfolio."

Yet lower procedural volumes in the U.S. and the continued impact of Hurricane Maria in Puerto Rico prompted NuVasive to cut its guidance for the full year. The surgical specialist now sees revenue of $1.03 billion, down $35 million from its previous forecast, and $1.91 per share in adjusted earnings would represent a $0.09 reduction.

With the stock trading at levels last seen in early 2016, NuVasive announced a $100 million stock repurchase program. The move is designed to indicate the company's confidence that it can keep finding funds to commit toward long-term organic growth, and NuVasive sees the program continuing over the next three years.

NuVasive investors seemed to be pleased overall with the news, and the stock was higher by 2% in after-hours trading following the announcement. Nevertheless, once short-term disruptions end, it will be important for NuVasive to make good on its growth potential and find ways to accelerate adoption of its valuable technology among medical professionals in key niches of the healthcare sector.