Please ensure Javascript is enabled for purposes of website accessibility
Log In Help Join The Motley Fool
Free Article Join Over 1 Million Premium Members And Get More In-Depth Stock Guidance and Research
By Steve Symington - Oct 25, 2017 at 8:02AM

The motorcycle, snowmobile, and off-road vehicle giant crushed expectations and raised its outlook yet again.

Now that the dust has settled, let's pump the brakes to get a better look at how Polaris kicked off the second half of the year, as well as what investors can expect from the company in the months ahead. 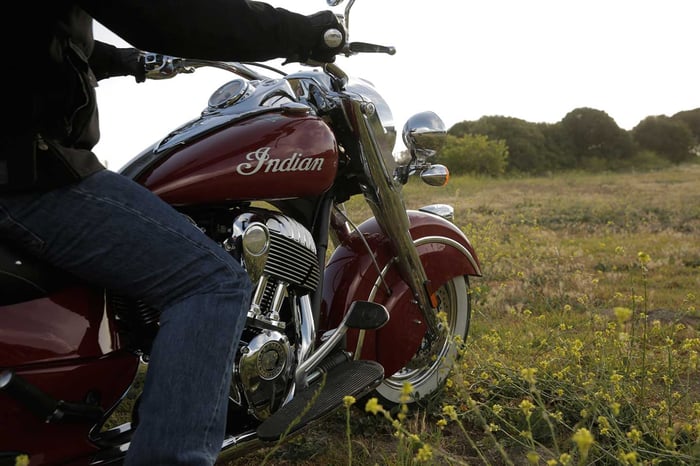 What happened with Polaris this quarter?

Our emphatic return to profitable growth in the third quarter was a testament to the power of the Polaris brand, the strength of our dealer network and the competitive drive of the Polaris team. During the quarter, strong retail growth in both North America and nearly all of our International markets drove record sales and highlighted our ongoing product innovation, improving product quality and sharpened execution. [...] Results were strong throughout our portfolio, led by Indian Motorcycles' exceptional performance as they accelerated share gains and outpaced a declining North American motorcycle market while also delivering strong growth in Europe, Australia and Asia. I am particularly proud of the improved performance from our Off-Road Vehicle business, which was fueled by a well-planned and executed Factory Authorized Clearance sale and the strong reception of our model year 2018 introductions.

Wine also noted that RZR retail sales were "especially strong," and the company enjoyed its best ATV retail quarter in two years. In addition, Polaris was able to drive its significant bottom-line growth despite hurricane-related complications and higher-than-expected warranty and rework costs.

Polaris now expects 2017 adjusted sales to increase 18% to 19% year over year (up from previous guidance for 12% to 14% growth), which should result in adjusted net income per share in the range of $4.75 to $4.85 (up from prior guidance for $4.35 to $4.50). This marks the second time in as many quarters that Polaris has significantly increased its full-year outlook despite operating in a difficult market.

With that in mind, it was no surprise that Polaris stock revved more than 15% higher on Tuesday as the market absorbed the news. And I see no reason Polaris can't continue delivering market-beating gains if it can sustain this momentum going forward.