During Apple's (NASDAQ:AAPL) Sept. 12 product launch keynote, the company introduced the Apple Watch Series 3. The watch includes many cool improvements over its predecessor, such as a much faster processor, a better wireless chip, and a barometric altimeter.

The big new feature, though, was the cellular-enabled option to the Apple Watch Series 3 lineup in addition to standard ones that just have GPS and Wi-Fi connectivity. 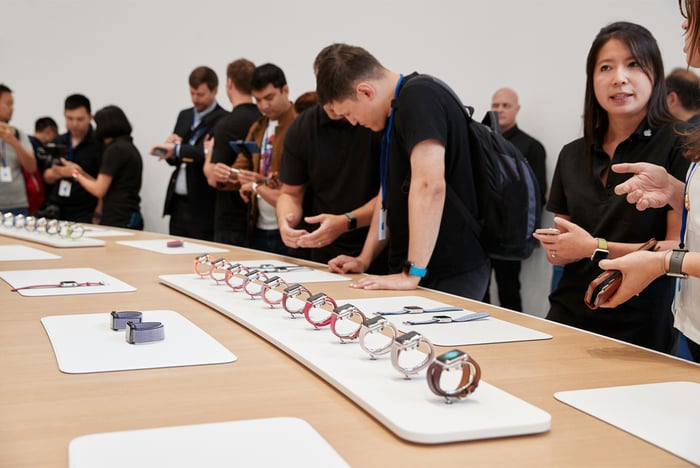 While I'm impressed with the Apple Watch Series 3, something that might be just as impressive is Apple's pricing strategy for the product line. Allow me to explain.

Apple doesn't charge that much extra for cellular

All of the higher-end Apple Watch Series 3 watches -- that is, the variants with stainless steel as well as ceramic casings -- come with cellular capability built in by default.

However, I suspect that many, if not most, Apple Watch buyers will opt for the lower-cost versions with aluminum casings, especially since the functionality is identical between the ones with the aluminum casings and those housed in fancier materials.

I think that many buyers who don't intend to enable the LTE functionality will still opt for the versions with LTE connectivity just to be safe in case they want the functionality down the line. This phenomenon, should it play out, would be good for Apple as it'd mean an increase in Apple Watch average selling prices, overall revenue, and ultimately profits.

Improved financial results during this product cycle is always a good thing, but there's potentially a bigger-picture implication here as well.

My guess is that there will be an overwhelming mix shift toward Apple Watch models with LTE capability, which will ultimately give Apple the confidence to simply stop releasing variants that don't have LTE capability.

In fact, I wouldn't be surprised to see all new Apple Watches, beginning with next year's models, come with LTE capability built in.

Once a large portion of the installed base migrates to LTE-capable Apple Watches, developers will be free to develop applications that don't rely on the presence of an iPhone near the Apple Watch.

The potential widespread adoption of LTE across the Apple Watch installed base, coupled with the continued meteoric rise in the processing capabilities in each new Apple Watch, should combine to transform the watch into a highly robust mobile platform for app developers in the years ahead.

Should the Apple Watch app ecosystem continue to gain momentum, particularly as other smartwatch/wearable device vendors seem to be having little success, Apple Watch could ultimately cement itself as the wearable computing platform of the future.