Chipotle's third-quarter earnings report was disappointing, but investors are underestimating the likelihood that the fast-casual chain will make a full recovery from its self-inflicted wounds.

However, while investors have grown impatient with the pace of Chipotle's recovery, the company still has a good chance of rebuilding its profitability over time. This makes Chipotle stock very enticing at its recent trading price. 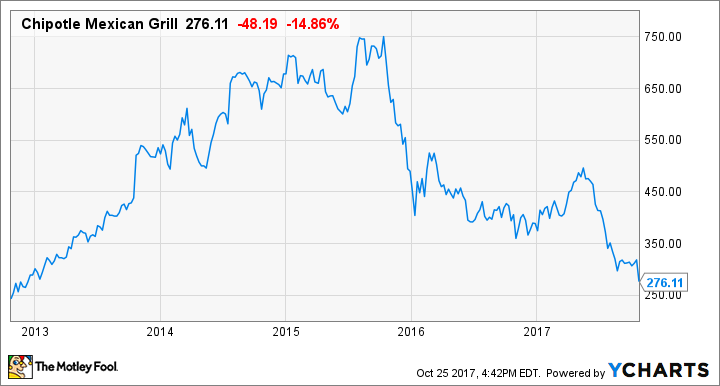 The results and outlook in brief

Earnings per share surged 155% to $0.64 and would have been $1.33 but for a special charge related to credit card fraud and the impact of Hurricanes Harvey and Irma. That said, even this adjusted result was $0.30 worse than the average analyst estimate.

Indeed, Chipotle was facing a very easy year-over-year comparison. Chipotle's earnings power was artificially depressed in 2016, as the company tried to recover from the food safety lapses that have devastated its results since late 2015. Just two years ago, Chipotle's third-quarter EPS reached $4.59.

The fourth-quarter outlook is also fairly subdued. Chipotle expects to report another quarter of low single-digit comp sales growth, which will presumably keep profitability under pressure (at least by historical standards).

How Chipotle plans to accelerate growth

Ever since Chipotle resolved its initial food safety lapses, management has been focused on getting sales back to pre-crisis levels. So far, these efforts have come up short. However, Chipotle still has significant untapped opportunities to kick-start its sales recovery. I'll highlight two of them.

First, Chipotle is finally focusing on menu innovation. For many years, it made only minor changes to its menu -- even those were rare -- because its business was already so successful. Now, Chipotle realizes that it needs new items to get customers excited about the brand again.

The recent national rollout of queso hasn't had quite as big an impact as investors may have hoped, but there are plenty of new menu items in testing. These include new salads, desserts, and frozen margaritas. Chipotle may even launch a breakfast menu. Menu innovation holds huge potential for the company as it can get customers to visit more frequently.

Second, Chipotle is investing in improving its digital capabilities. As I noted earlier this year, the company's mobile app needs work. Fortunately, Chipotle is set to release new iOS and Android apps on Nov. 6, providing additional capabilities and a better user experience.

The company is also launching a digital offer platform. This could be a massive traffic driver in the long run, as evidenced by the success of Starbucks' (SBUX 0.12%) personalized My Starbucks Rewards platform. Some investors may respond that Chipotle is no Starbucks. But it's worth noting that the leader behind Chipotle's digital efforts is Curt Garner, who spent nearly two decades at Starbucks, rising to the level of Chief Information Officer.

Despite having fallen about 60% in the past two years, Chipotle stock still trades for 38 times analysts' 2017 earnings estimates -- and those estimates are about to plunge, following Chipotle's big earnings miss. That may seem awfully pricey for a company that still has significant problems to fix.

However, Chipotle's profitability is still artificially depressed. In July, a norovirus outbreak was linked to one of its restaurants. Shortly thereafter, customers discovered a rodent infestation at a different location. Both issues were quickly resolved, but they had a major negative impact on customer traffic. Once Chipotle manages to stay out of the headlines for a while, its sales growth initiatives will have an opportunity to kick in.

Furthermore, even if average restaurant sales remain flat in 2018, Chipotle's restaurant-level operating margin should improve to around 20% next year, compared to 17.6% year to date. Food costs are expected to moderate (particularly for avocados), while menu price increases will more than offset rising labor costs. A 2.4 percentage point increase in restaurant-level operating margin by itself would boost EPS by about $2.50.

Thus, you don't have to believe that Chipotle can get its operating margin all the way back to pre-crisis levels to recognize that the company has huge near-term earnings growth potential. And if Chipotle's sales recovery efforts gain steam, EPS could surge to $20 -- or even $30 -- within a few years. That makes Chipotle stock seem like quite a bargain.